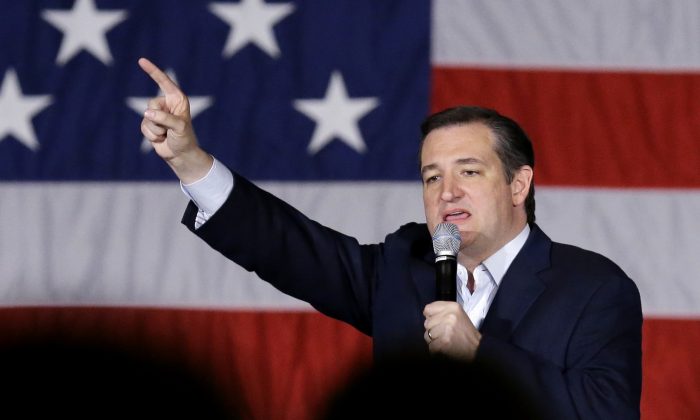 Donald Trump still leads the Republican delegate count with 758, to 540 for Cruz, and 144 for John Kasich. He should easily win New York on Tuesday, April 19. New York has 95 Republican delegates, three for each of its 27 CDs and 14 statewide. If a candidate wins over 50 percent in a CD, they win all three delegates; otherwise, it will be two to the winner, and one for the runner up. If a candidate has over 50 percent statewide, they win all statewide delegates; otherwise, statewide delegates are awarded proportionally.

New York polls currently give Trump 54 percent of the vote, with 21 percent for Kasich and 19 percent for Cruz. As a result, Trump is likely to win over 50 percent statewide. What is not known is how evenly dispersed his support is; he would lose some CD delegates with uneven support.

A week after New York, five northeastern states hold their primaries. The northeastern states are Cruz’s worst region, so Trump and perhaps Kasich should do well. It is unlikely that the Republican nomination will be decided until at least June 7, the final primary day, when five states vote, including the most populous state, California.

Why Is Trump More Popular Than We Thought?

Should Trump fall short of the 1,237 pledged delegates needed to win the nomination outright, he may be able to persuade enough unaligned delegates to vote for him, and so cross the line before the national convention, which starts July 18.

However, if Trump cannot reach 1,237 votes on the first round of the convention, it is likely that Cruz will win the Republican nomination. Most delegates are not selected by the candidates themselves, but by conventions held separately from the primaries. The party faithful dominate these conventions, and are much more likely to support Cruz than Trump or an establishment candidate. Delegates are usually only bound to a candidate for the first round of voting, and are free to vote as they wish after that initial round.

Cruz is also performing well in the actual delegate selection conventions because his organization is far superior to Trump’s.

Yesterday, Bernie Sanders won the Wyoming caucus 56–44, but the delegates were split 7–7 between Sanders and Hillary Clinton. It is likely that Clinton’s relatively strong performance in Wyoming, compared to wipeouts in other western state caucuses, was because Wyoming allowed absentee votes, instead of only in person votes. The even delegate split is because there were three Democratic delegate categories in Wyoming, and all three had even total numbers of delegates.

Clinton currently leads Sanders by 210 delegates. New York has 247 pledged delegates, and Clinton is leading there by about 14 points. Clinton will benefit from New York being a “closed” primary—this means that only registered Democrats can vote in the Democratic primary. Sanders has greatly benefited from Independents in states that allow them to vote in Democratic contests. For example, according to Wisconsin exit polls, Sanders won Independents 72–28, while he tied Clinton among Democrats. Most remaining states use closed primaries.

I expect Clinton’s current 210 pledged delegate lead to increase, as most remaining Democratic delegates are from New York, Pennsylvania, Maryland, New Jersey, and California. Clinton currently leads in all these states, usually by double digit margins.

The U.S. general election will be held on Nov. 8. While Trump could win the Republican nomination, his net favorability rating with all voters is currently a shocking -34, with 30 percent having a favorable opinion and 64 percent an unfavorable one; these numbers have worsened over the last few months.

Hillary Clinton is also currently unpopular, with a net favorability rating of -15. Clinton and Trump are very well known, so I believe the Clinton vs. Trump general election match up can be taken seriously. Clinton leads Trump 46–38; this gap has widened in the last few months.

Clinton also leads Cruz 45–41, but she trails Kasich 44–39. If the Republicans had selected a relative moderate, such as Kasich, they would have a good chance of winning the general election, as Clinton is running for a third Democratic term. I think Clinton would win the election by more than her current lead vs. Cruz because many voters have not yet realized how extreme Cruz is.

Bernie Sanders currently has bigger leads over the Republicans than Clinton, and he has a net +7 favorability rating. However, Sanders has not faced a single Republican attack ad yet. If he somehow became the Democratic nominee, Republicans and their media allies would attack him as a socialist, and I think his favorability numbers and general election positions would then deteriorate. I believe that Clinton is the stronger Democratic general election candidate.