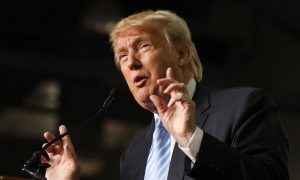 Poll: Trump Has 11-Point Lead Over Ted Cruz in Iowa
0 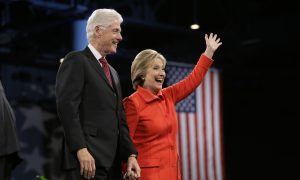 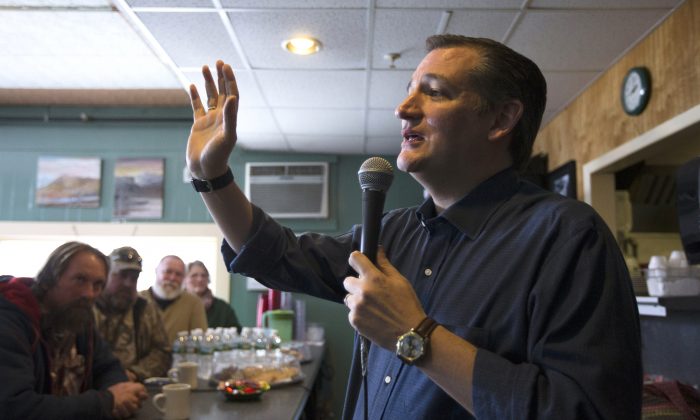 Republican presidential candidate Sen. Ted Cruz (R-Texas) at a campaign stop at Lino's Restaurant in Sanbornville, N.H., on Jan. 19, 2016. Cruz is dreaming of a face-off with Democratic front-runner Hillary Clinton, even before the first primary votes are cast. He warns his supporters about what he thinks America will look like under a Clinton administration, predicting a nuclear-armed Iran, amnesty for millions of people in America illegally and the continuation of President Barack Obama’s health care law. (AP Photo/John Minchillo)
Politics

Cruz Offers His Vision for Election Face-Off With Clinton

He warns his supporters about what he thinks America will look like under a Hillary Clinton administration, predicting a nuclear-armed Iran, amnesty for millions of people in America illegally and the continuation of President Barack Obama’s health care law.

“That’s how we win with a clear contrast,” Cruz told voters at a Wednesday town hall in Exeter, New Hampshire.

He calls it “telling the truth with a smile.”

For Cruz, Clinton’s biggest Democratic rival, Vermont Sen. Bernie Sanders, is an afterthought, even as Sanders gains in the polls. Cruz wants to take on Clinton—and he paints a picture for what a Cruz-Clinton contest would look like whenever he speaks with voters.

When a nominee begins “running to the middle,” Cruz says, it hurts the Republican Party’s chances of securing conservative votes in the general election. But Cruz voters in New Hampshire said this week that they would like to see him moderate his message to broaden his appeal—something Cruz says goes against what he stands for.

“How do we win?” Cruz asked voters. “Washington consultants … always say ‘the way you win is you run to the middle.’

“You run to the mushy middle, you blur the distinctions,” he continued, calling it the “Democrat-lite” approach. “Every time we do that, we lose.”

By contrast, Clinton tends to view the entire presidential Republican field as her foe, warning fellow Democrats of what could happen if the GOP wins the White House. But her campaign has identified either Cruz or billionaire businessman Donald Trump as their likely opponent in a general election, assuming she will clench the nomination.

One of her latest ads in Iowa shows images of Trump at one of his rallies and a gun-toting Cruz, vowing to prevent Republicans from “ripping all of our progress away.”

She also attacked Cruz on his approach to fighting the Islamic State, turning his political newcomer status against him.

“Promising to carpet bomb until the desert glows doesn’t make you sound strong, it makes you sound like you are in over your head,” she added, referencing recent comments by Cruz to demonstrate his aggressive stance against the militant group.

Cruz still faces an uphill battle in his effort to defeat Trump, widely seen as the national GOP front-runner. Cruz’s political career has thus far been based on support from the most conservative tea party wing of the Republican Party, heralding his bouts both with Democrats and GOP leadership and billing himself as a “consistent conservative.”

He cherishes his image as an outsider, railing against the “Washington cartel” and joking that voters should run and hide from any candidate who is liked by those in power.

When laying out how he sees a Cruz vs. Clinton general election playing out, Cruz uses the failed White House bids of Republicans Bob Dole, John McCain and Mitt Romney to demonstrate why his approach is what is needed to ensure a Republican win.

“What they did didn’t work,” Cruz said. “We’ve got to do something different.”

On Wednesday, he told reporters he believed establishment Republicans had rejected Sen. Marco Rubio and were coalescing behind Trump, a move he used to rally conservatives, who may view Trump as too liberal, to get behind him.

Cruz’s message has resonated with voters in New Hampshire and Iowa.

“I don’t like the Republican establishment,” said Dean Behrendsen, a 67-year-old farmer from Gilmore City, Iowa, who saw Cruz speak at a pizza restaurant near there earlier this month. “What the Republican establishment has done for us is give is President Bob Dole, President John McCain and President Mitt Romney. We’re ready, most of us, for a change. Someone who’s honest and an outsider.”

Mike Schleusener, a 72-year-old farmer from Marathon, Iowa, agreed with Cruz’s argument that Republicans need to turn to someone like him who fights with the establishment.

“I think that’s the appeal of somebody like Ted Cruz,” Schleusener said. “Americans are fed up with mainstream Republicans.”

But Cruz supporter Bryant Feeney of Hollis, New Hampshire, isn’t so sure that Cruz’s pitch is the right recipe for a victory in November.

“I don’t know that we are ready to have someone who is a core conservative,” Feeney said before a Cruz rally on Wednesday. “I just don’t feel that’s where a majority of the nation is. I hope I’m wrong. I’d like to be surprised.”