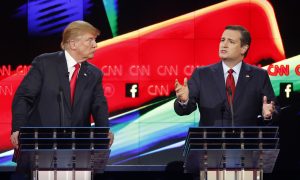 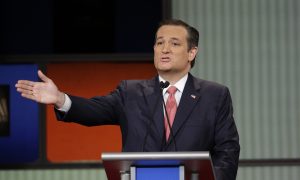 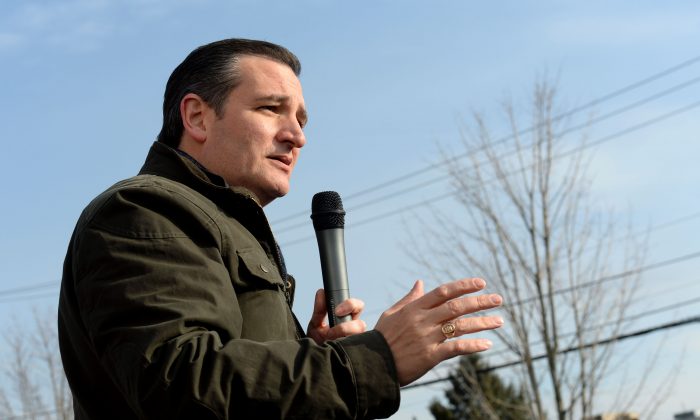 He was there to shoot a campaign video with Phil Robertson, the gray-bearded patriarch of reality TV’s “Duck Dynasty” clan. The junior U.S. senator from Texas, donning camouflaged overalls, is shown squeezing off a couple of rounds toward the gray sky. It was not immediately clear whether any ducks were harmed during the making of the ad.

Looking into the camera, Robertson says his selection criteria for endorsing a candidate include “would they kill a duck, put ’em in a pot and make ’em a good duck gumbo.”

Cruz has made the defense of Second Amendment rights a cornerstone of his presidential campaign, touting his past legal work fighting against gun control laws. In his three years in the U.S. Senate, Cruz’s voting record has earned an A+ rating from the National Rifle Association. Fiery criticism of President Barack Obama’s efforts to tighten background checks for gun purchases is a staple of Cruz stump speeches: The candidate quipped that back in Texas the term “gun control” means that you “hit what you’re aiming at.”

But records suggest the 45-year-old politician’s passion for the issue emerged relatively recently in his life, coinciding with his ascent in Republican circles in Texas.

In an autobiography published last year, Cruz recounts how after he moved to Austin in 2003 to serve as the state’s appointed solicitor general, he became concerned about leaving his wife Heidi at home alone while he traveled. The couple had previously lived in Washington, where each had jobs in the administration of President George W. Bush.

“Worried that an intruder might come through the window, I placed a hatchet beneath our bed, and started to tell her to grab the hatchet if anything happened,” wrote Cruz. “As I was saying this, it struck me … this was stupid. Heidi is five-foot-two. The last thing I wanted was for my beautiful, petite wife to be trying to swing a hatchet at a large, menacing robber coming through the window.”

The next day, Cruz recounts, he bought her a Smith & Wesson .357 Magnum revolver to keep in the bedside table. According to his campaign, Cruz also owns a 12-gauge Beretta Silver Pigeon shotgun for bird hunting, though a spokeswoman declined to disclose when he bought the weapon. The campaign also declined to say whether he holds a permit to carry a concealed firearm.

According to the Texas Parks and Wildlife Department, Cruz purchased his first hunting license there in 2006, when he would have been 35 years old. He then bought licenses in three of the last 10 years — 2008, 2014 and 2015.

Cruz’s campaign said he purchased a Louisiana hunting license before the recent video shoot with Robertson, though the state’s wildlife department refused last week to confirm that.

Records from Iowa show he also bought licenses in 2013 and 2015 at the Hole N’ the Wall Lodge, site of an annual pheasant hunt hosted by home-state U.S. Rep. Steve King, typically attended by aspiring GOP presidential contenders. King has since endorsed Cruz and is now a national co-chairman of his campaign.

At the most recent hunt in Iowa, a smiling Cruz posed for media photos with about two dozen dead fowl while wearing immaculate tan and orange hunting attire, a shotgun resting on his shoulder.

The campaign’s website also features a wide array of apparel targeted at hunters, including camouflage T-shirts, safety-orange hats emblazoned with his name, and even “Camo Cruzie” drink holders. Earlier this month, Cruz’s campaign raffled off a custom Remington 12-gauge shotgun engraved with his logo.

Questions about whether Cruz is an active sportsman became a campaign issue during his 2012 run for the U.S. Senate in Texas. During a televised debate, Cruz’s Democratic opponent questioned whether Cruz owned a gun and twice asked whether he was an avid hunter. Cruz responded that he was a gun owner, but declined to say how often he hunted. When pressed afterward, he said the question was a distraction from the race’s real issues.

“He’s been pretty forthcoming about saying he enjoys hunting but doesn’t get to do it as often as he would like,” Cruz campaign spokeswoman Catherine Frazier told The Associated Press. “You don’t have to have a hunting license to shoot guns.”

“It’s no secret that Sen. Cruz has been a passionate defender of the Constitution from a very early age,” Frazier said. “He exercises his own right to bear arms regularly and often, and he’s very glad to live in a country where he can do that.”

In boosting his bona fides as a foot soldier for the Second Amendment, Cruz often cites his role in a 2008 court challenge to the District of Columbia’s ban on private possession of most firearms in the nation’s capital.

As solicitor general, Cruz helped file a brief to the U.S. Supreme Court on behalf of Texas and 30 other states in support of Dick Heller, a Washington resident who challenged the city’s gun ban. In his book, Cruz details the case at length and slams the Bush administration for arguing in court that reasonable restrictions on gun ownership are constitutional if they protect “important regulatory interests.”

“I was dismayed with the Bush administration’s attempt to water down the Second Amendment and incensed with D.C.’s attempt to write the Second Amendment entirely out of the Constitution,” Cruz recounts. “… Unlike the Bush administration, we did not believe that laws infringing Americans’ right to ‘keep and bear arms’ become constitutional whenever a federal judge finds them ‘reasonable.’ That’s not what the Constitution says; instead, it says ‘the right of the people to keep and bear arms shall not be infringed.’ In my view, ‘shall not be infringed’ means exactly that.”

In his written argument to the justices, however, Cruz took a more nuanced legal position. Responding to concerns expressed by the government that striking down DC’s gun ban could jeopardize other gun control laws across the country, Cruz listed numerous “reasonable regulations” on guns he argued were constitutional, including state prohibitions on felons possessing firearms, as well as bans on owning machine guns and sawed-off shotguns.

In the end, the high court ruled 5-4 to strike down the DC gun ban, upholding the individual constitutional right to own firearms. Though he didn’t directly represent Heller, Cruz’s involvement in the case helped bring the then-relatively unknown Texas lawyer to the notice of top gun-rights supporters.

“Ted Cruz is one of our nation’s leading defenders of the Second Amendment,” NRA executive Vice President Wayne LaPierre says in a quote featured on the candidate’s website. “For over a decade, Ted has fought tirelessly to defend our constitutional right to keep and bear arms, and his leadership was absolutely critical to our major victories before the U.S. Supreme Court.”