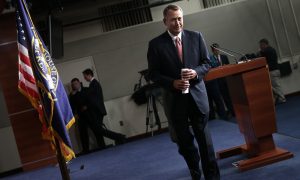 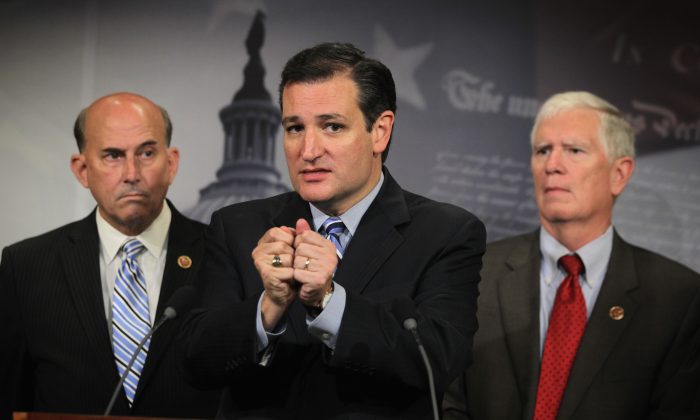 U.S. Sen. Ted Cruz (R-Tex.) at a press conference condemning Obama's immigration order on September 9, 2014 on Capitol Hill in Washington, DC. Cruz put a procedural move on Saturday to defund the order, which many say is unconstitutional, but was outvoted 22-74 in the Senate. (Alex Wong/Getty Images)
US

The Senate passed a $1.1 trillion omnibus spending bill that would fund most of the government through September after a rare Saturday session where Sen. Ted Cruz (R-Tex.) forced a vote on Obama’s immigration order.

To prevent a government shutdown on midnight Saturday, the Senate passed a four-day stopgap measure.

Cruz raised a rare constitutional point of order against the omnibus bill on Saturday, arguing that the portions of it funding the immigration order would violate three clauses in the Constitution, including the “separation of powers” and “powers of Congress” clauses in Article one, and the “laws be faithfully executed” clause in Article 2.

The Senate was scheduled to adjourn for the weekend, but continued on Saturday after Sen. Mike Lee (R-Utah) refused to give the motion unanimous consent unless Senate Majority Leader Harry Reid (D-Nev.) allowed the Senate to vote on an amendment to the spending bill defunding the immigration order, which Reid did not allow.

Cruz said that the main purpose of the point of order was to hold Senators, both Democrats and Republicans, accountable for their stance on the president’s immigration order.

“Since President Obama enacted his unilateral amnesty after the elections, Democrats have never been made to answer for it. Tonight, they will and they will show America whether they stand with a lawless President,” Cruz said in a statement. He noted that six Senate Democrats had previously made statements criticizing the immigration order.

The Senator devoted more time to admonishing members of his own party for being non-committal on opposing the president’s immigration order, and said that a vote was needed to test whether their stated intent to defund the immigration order after Republicans take control of the Senate was genuine.

The Republican leadership has promised to tackle the president’s immigration order in February, when the funding for the Department of Homeland Security would run out and Republicans control both the House and the Senate, but has been criticized by the grassroots wing of the party for not attaching provisions in the spending bill to defund the immigration order.

“I take them at their word because the alternative would be that elected leaders were saying something to the American people they don’t believe. And they don’t intend to follow through on. And I very much hope that is not the case,” Cruz said on the Senate floor. “Indeed, I’m reminded of Reagan’s famous admonition, ‘trust but verify.'”

Senate Democrats and a majority of Senate Republicans voted against Cruz’s point of order, which was defeated in a 22-74 vote.

Cruz’s point of order is the second major hurdle the omnibus bill has had to surmount. In the House, Democrats split over whether to pass the bill because of provisions that were inserted in the last-minute that would loosen regulations on derivatives trading and campaign finance.

House Minority Leader Nancy Pelosi had rallied House Democrats to vote against the bill, forcing the White House to scramble for votes, and reportedly the president made personal appeals to House Democrats on the phone.

Cruz has been criticized by members of his own party for giving Democrats a opportunity to confirm more executive nominees before they lose control of the Senate.

Cruz’s communications director fired back, charging that Reid would never pass that opportunity when there was still time.

“Did anyone seriously believe Reid was going to let noms die when there was working time on the clock left?” Amanda Carpenter said.

The White House said on Thursday it would sign the spending bill.