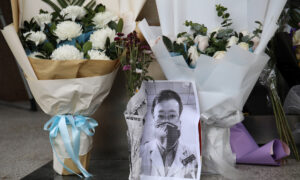 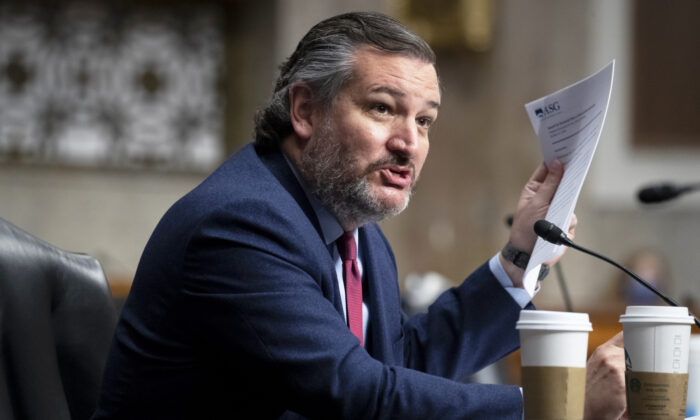 Sen. Ted Cruz (R-Texas) holds a copy of a 2019 speech by Linda Thomas-Greenfield that was delivered at the 'Confucius Institute' at Savannah State University, during the Senate Foreign Relations Committee hearing on the nomination of Thomas-Greenfield to be the United States Ambassador to the United Nations, in Washington on Jan. 27, 2021. (Michael Reynolds-Pool/Getty Images)
Congress

Sen. Ted Cruz criticized the World Health Organization (WHO) for parroting the Chinese Communist Party’s (CCP) narrative that COVID-19, the disease caused by the CCP virus, couldn’t have initially spread from a Wuhan lab.

“Shameful. At the outset of the pandemic, the WHO acted as a propagandist for communist China, echoing the CCP’s lies,” the Texas Republican said on Twitter on Feb. 10. “Now, the WHO concludes that the virus did not accidentally escape from a Wuhan govt lab because … the CCP told them it didn’t.”

As a team of WHO experts wrapped up their trip on Feb. 9, Peter Embarek, a Danish scientist who led the WHO fact-finding mission, dismissed the claim that the CCP virus may have leaked from a local virology lab as “extremely unlikely.” Bats, he said, remained a likely source.

“The laboratory incident hypothesis is extremely unlikely to explain the introduction of the virus into the human population,” Embarek said. “Therefore, [it] is not in the hypotheses that we will suggest for future studies.”

Days before former Secretary of State Mike Pompeo left office, the State Department released a fact sheet stating that it had reason to believe several researchers from the Wuhan Institute of Virology exhibited COVID-19-like symptoms in autumn 2019, even as a senior virologist at the Chinese facility said otherwise.

The State Department on Feb. 9 cast doubt on the amount of transparency afforded to the WHO team during their time in Wuhan and said that the United States would present its conclusion after reviewing the full WHO report.

The team visited the lab on Feb. 3.

“I think the report is shameful,” Cruz told Fox News on Feb. 10. ”The WHO, instead of stepping in as medical professionals, instead of acting quickly to stop this pandemic … just echoed the lies from the Chinese Communist government.”

Cruz alleged that the WHO assisted the Chinese regime in covering up the start of the Wuhan epidemic toward the end of 2019, which led to a lack of action to prevent international travel out of Wuhan, resulting in a full-blown pandemic.

The WHO didn’t immediately respond to a request for comment by The Epoch Times.

An audit by congressional Republicans in September 2020 concluded that the CCP and the WHO are “culpable” for the spread of the virus, and the global pandemic could have likely been prevented had they acted differently.

The report by Republican members of the House Foreign Affairs Committee said that the CCP engaged in active coverup efforts of information surrounding the spread of the CCP virus, and the WHO enabled the cover-up by praising the CCP and “parroting” its talking points.

The Trump administration announced plans to withdraw from the WHO in July last year, amid criticism that the international body was acting at the behest of the Chinese regime.

Former President Donald Trump said the WHO failed to investigate credible reports from sources in Wuhan that conflicted with Beijing’s accounts about the virus’s spread and “parroted and publicly endorsed” the theory that human-to-human transmission was not happening.

Upon taking office, President Joe Biden reversed Trump’s decision to leave the WHO.

Separately, Chinese dissident Yuan Hongbing, an academic and vocal critic of the CCP, condemned the WHO’s findings on the source of the pandemic as “a farce staged by the Chinese regime,” adding that the CCP is likely to leverage them to deflect responsibility for causing the global crisis.

The WHO team has said it could take years for health experts to fully understand the origins of the CCP virus.