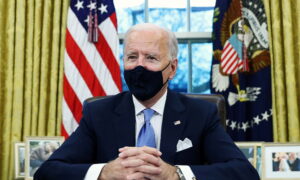 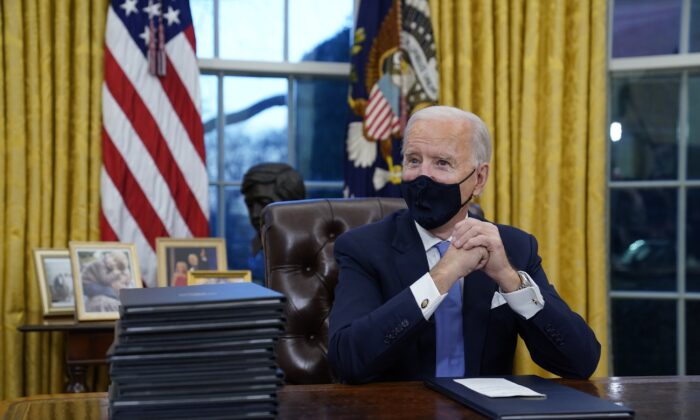 Top Republicans have taken aim at President Joe Biden’s proposals on immigration reform, which includes proposed legislation and a flurry of executive orders.

Biden took a number of immigration-related actions following his Jan. 20 inauguration, including a memo directing the preservation and strengthening of the Deferred Action for Childhood Arrivals (DACA) program and a proclamation terminating the Trump administration’s declaration of an emergency at the southern border and ordering a redirection of funds from border wall construction.

The president also signed an executive order mandating that the Census Bureau include illegal immigrants in its apportionment, in contrast to President Donald Trump, who sought to exclude them.

Biden’s order directs relevant agencies to review enforcement procedures and issue new guidance that accords with the stated values and priorities of safeguarding “the dignity and well-being of all families and communities” and addressing the humanitarian challenges at the southern border while ensuring security.

The president has also sent a new draft bill to Congress titled the U.S. Citizenship Act of 2021, with three core target areas: prioritizing smart border controls, addressing the root causes of migration, and enhancing pathways to citizenship, including for the 11 million immigrants now in the country illegally.

“It is deeply troubling that most of Joe Biden’s first acts as president were to protect illegal immigrants and encourage illegal immigration at the expense of American jobs and workers,” he stated. “Not only has he chosen to halt construction of a wall on America’s southern border and to continue Barack Obama’s illegal executive amnesty by preserving the Deferred Action for Childhood Arrivals (DACA) program, but he is promoting open-borders legislation that would gift citizenship to over 11 million illegal immigrants, roll back immigration enforcement, and promote and increase foreign labor at a time when many Americans desperately need work.

McCarthy also took aim at Biden’s flurry of executive actions and proposed legislation, saying in a statement that “it’s unfortunate that the first legislative plan that will be sent to Congress by President Biden, along with one of the first presidential actions, will prioritize help for illegal immigrants and not our fellow citizens.”

Noting that there are still nearly 11 million unemployed U.S. citizens, McCarthy said that “pushing a bill that grants citizenship to 11 million people living in the country illegally is an affront to the rule of law and will divert focus away from helping American citizens who want to go back to work.”

He argued that Biden’s proposal also encourages more illegal immigration, “which further detracts resources and energy away from the needs of American citizens.” McCarthy lamented the fact that Biden’s plan doesn’t include any additional funds for physical barriers and other infrastructure to protect the southern border.

“This problem is worsened by President Biden’s irresponsible executive order to halt wall construction along the southern border,” McCarthy said, adding that he expects other Republicans to come out in opposition to Biden’s plans on immigration.

White House press secretary Jen Psaki defended the draft bill at her first briefing in the role, saying that the act modernizes the immigration system and provides “hardworking people who have enriched our communities and lived here for decades an opportunity to earn citizenship.”

“The president’s priority reflected in the bill are [sic] to responsibly manage the border, keep families together, grow our economy, address the root causes of migration from Central America, and ensure that America can remain a refuge for those fleeing prosecution,” Psaki said.