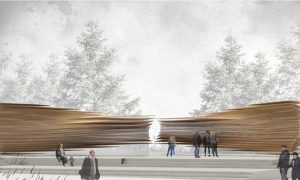 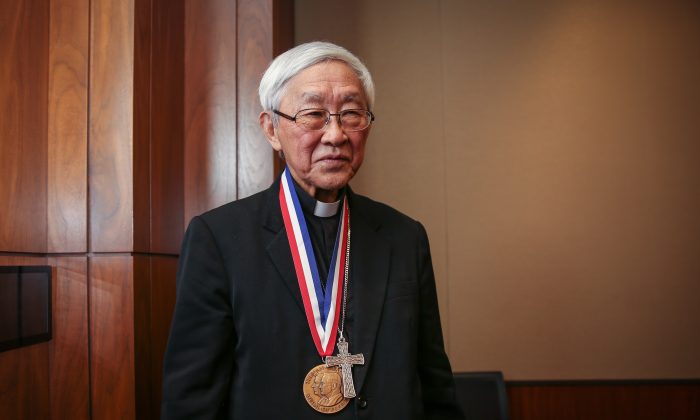 Cardinal Joseph Zen, recipient of the Truman-Reagan Medal of Freedom during the Victims of Communism Memorial Foundation's ceremony in his honor, at the Rayburn House Office Building on Capitol Hill in Washington on Jan. 28, 2019. (Samira Bouaou/The Epoch Times)
US News

The bishop emeritus of Hong Kong received the foundation’s highest honor, the Truman-Reagan Medal of Freedom, at a Capitol Hill ceremony Jan. 28.

The medal is bestowed annually on “those individuals and institutions that have demonstrated a life-long commitment to freedom and democracy and opposition to communism and all other forms of tyranny,” according to the foundation, an educational and human-rights nonprofit organization. The late pope, Saint John Paul II, whose bold stand against world communism helped to topple the Soviet Union, was a past recipient of the medal.

Marion Smith, the foundation’s executive director, said Zen has “given voice to those denied religious liberty and has opposed the collusion of the Vatican and Chinese Communist Party on the matter of ecclesiastical appointments.”

The 87-year-old cleric said he was worried about the future of Hong Kong because the autonomy that Beijing promised to protect is slipping away.

Although “true” Marxism no longer exists in mainland China, “the atheist persecutor dictatorship remains,” and is cracking down on religion throughout the country, including in Hong Kong, whose preexisting rights and freedoms Beijing vowed to respect for at least 50 years in 1997, when the United Kingdom ceded the territory to China.

“Of the promised high degree of autonomy, very little remains,” Zen said. “We are soon to become just one of the cities in China.”

“I want to remember many of those heroes who are suffering at this moment in China or Hong Kong for voicing their claim for respect of their dignity, for freedom, and for democracy—those well-known and those anonymous heroes.”

Beijing seeks to subordinate all churches to Communist Party control and employs officials whose job is to oversee those religious institutions. The Chinese regime openly interferes in the affairs of that nation’s estimated 12 million Catholics and has arrested and persecuted church officials. Zen has been a leading critic of this policy.

In the fall, the Vatican and the ruling Communist Party reportedly signed a provisional deal allowing Beijing to effectively appoint a limited number of bishops, a move that has been criticized by that nation’s Christians, who warn that it will only encourage more officially-sanctioned religious repression.

In September last year, Zen described the pact as “a complete surrender” by the Vatican, as well as an “incredible betrayal” of the Catholic faith.

U.S. Rep. Chris Smith (R-N.J.), the co-chairman of the Victims of Communism Memorial Foundation, wrote in a Washington Post op-ed in December 2018 that China’s Communist Party is now engaged in “the most comprehensive attempt to manipulate and control—or destroy—religious communities since Chairman Mao Zedong made the eradication of religion a goal of his disastrous Cultural Revolution half a century ago.”

Zen told reporters Jan. 28 that he’s wary of the agreement, which suggests the Catholic Church in Hong Kong “will need a blessing from Beijing” to name bishops. “This suggests Hong Kong’s ‘one country, two systems’ principle is about to disappear,” he said.

“I hope the Vatican will stand their ground and appoint a bishop who can truly lead our diocese and protect our religious life.”

Zen said he is praying for Pope Francis, whom he met with at the Vatican earlier this month, to do the right thing. The Holy See hasn’t answered his letters, in which he objected to the pact about appointing bishops, he said.

“They’re making their own judgment on matters that I disagree with,” he said. “We Catholics are praying for [the pope]. With God’s blessings, we pray he won’t make mistakes.”

In an interview with The Epoch Times at the awards ceremony, Rep. Smith explained why the cardinal deserved to be honored.

“Cardinal Zen, for years, even before he became the bishop of Hong Kong, has been a tremendous leader for all faiths believing that religious freedom is a fundamentally recognized human right, which China has agreed to. He has spoken out on behalf of everyone, not just Catholics, and I think that makes a difference. We are all in this together.

“The repression that has been unleashed … has crushed so many people’s lives, not just through murder and through torture and long jail sentences, but their hopes and aspirations are thwarted because of this dictatorship.

“I think Cardinal Zen inspires all of us, people inside of China, as well as outside, to do more on behalf of religious freedom.”

A representative of the Falun Gong (also known as Falun Dafa) spiritual practice, which Zen has defended, said the cardinal deserves the award.

“Cardinal Zen is known to be a very righteous and outspoken figure in Hong Kong,” said Kan Hung-cheung of the Hong Kong Association of Falun Dafa.

Kan recalled how Zen spoke up when the Chinese regime began its persecution of Falun Gong in mainland China in 1999. The regime’s propaganda initially had an effect on Hong Kong’s population, and Falun Gong practitioners faced a hostile environment. Nonetheless, Zen defended them.

“When [the Chinese Communist Party] started the persecution of Falun Gong in 1999, the then-Bishop Zen came up to defend the universal values of truthfulness-compassion-forbearance [the core principles of Falun Gong] and the freedom of religion of Falun Gong, and strongly objected to and criticized the Hong Kong government on the intended suppression.”

Zen has helped to ameliorate the repression suffered by Falun Gong practitioners. “We very much appreciate his support of us in so many years,” Kan said.

Zen said that receiving the Truman-Reagan Medal of Freedom will give his fellow Chinese Catholics hope.

Zen was asked by The Epoch Times if his receipt of the award would have an impact on religious freedom in China and Hong Kong.

“Sure,” Zen replied, “because I got everybody to promise to pray for us and I hope you get informed and always be concerned. That’s important for us, because we need the support of everyone.”