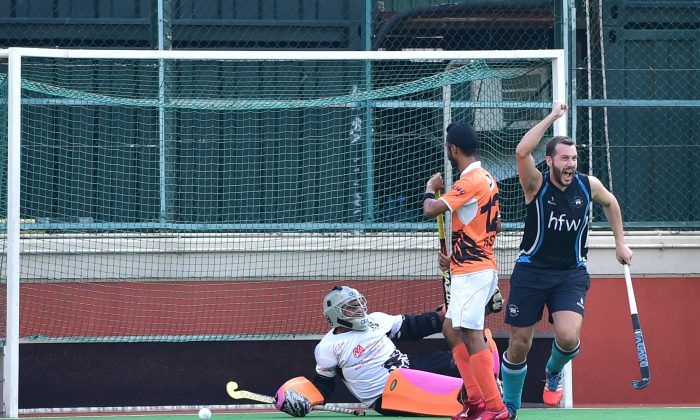 Hong Kong men’s premier hockey has just 2-more rounds to go (Nov 29 and Dec 6) before the half-way break. The league positions and the teams likely to make the divisional split (top 6 and lower 5) at the half way mark are beginning to emerge.

However, the final positions are still difficult to predict as the odd number of teams in the division means that not all teams have played the same number of matches. But the teams safe in the top half are Khalsa-A (24-points from 8-matches), SSSC-A (22-8) and HKFC-A (18-8).

Valley is up against Khalsa this week (Nov 29), and Pak-A and KNS still have to play HKFCA all of which will be difficult matches for the mid table teams. While HKCC play HKFC-B on Sunday and then meet Shaheen on the final weekend.

SSSC-A vs HKFC-A
The star match of last Sunday’s games was the match between HKFC-A and SSSC-A. This highly competitive match with many regional international and ex international stars, was full bore for the full 70 minutes of play. HKFC were delighted to score first with a solo effort by Tom Moore but SSSC always looking dangerous in attack and leveled the match just before half time from a narrow angle shot by their Malaysian International Ismail Bin Abu.

SSSC also had several penalty corner chances during the first half but could not convert, skying the ball above the goal. But 4 minutes into the second half SSSC got on target from a penalty corner to take a 2-1 lead and went on to score a third well taken one-on-one goal with the HKFC goalie by Ismail Bin Abu with 12 minutes left on the clock. HKFC pushed to get back on terms but could not hit the target.

The big match for top of the table lead will be SSSC vs Khalsa t King’s Park on Dec 6.