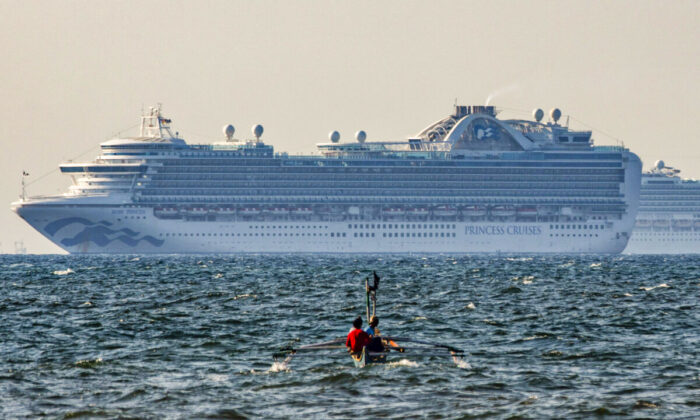 A cruise ship is seen in a 2020 file photo. (Photo by Ezra Acayan/Getty Images)
Vaccines & Safety

Update: A Crystal Cruises spokesperson issued this statement to The Epoch Times:

“Thank you for your inquiry regarding Crystal Symphony whose most recent cruise was extended by one day with disembarkation taking place this morning. Guests were provided overnight accommodations last evening with the ship’s exemplary service and amenities offered and they well cared for on board.”

“Crystal has arranged ground transportation to local airports, as well as PortMiami, and guests are currently en route home. We know that today’s transfer to Port Everglades via ferry was uncomfortable due to inclement weather.”

“This end to the cruise was not the conclusion to our guests’ vacation we originally planned for. Crystal’s guests are among the most passionate and loyal in the cruise industry and we thank them for their patience and understanding during this challenging time. Please note that we are not able to comment on pending legal matters at this time.”

A Miami judge issued a warrant that gives officials the ability to seize the Crystal Symphony ship if it enters U.S. waters. Passengers and crew on board told news outlets that the cruise ship diverted to the Bahamas instead of returning to South Florida.

Xivi Medina, a vendor aboard the Crystal Symphony, told NBC Miami that there are no passengers on board now. The only people on board are crew members and vendors.

Elio Pace, a singer performing on the Crystal Symphony, also wrote that the ship was diverted.

“Would you believe me if I told you that yesterday, Friday, (the night of my second show) after all arrangements had been set for flights, car hire, etc by all disembarking passengers and crew, we were notified by the captain that the ship was no longer sailing to Miami and was instead diverting to Bimini in the Bahamas where we would arrive tomorrow, Sunday, and disembark from there?” he wrote on Instagram.

A passenger wrote on Twitter to travel agent Mundy Cruising: “Can you help me change my flight to Heathrow from Miami as we are stuck on Crystal Symphony which has changed route and is now heading for Bahamas instead of Miami.”

In a court complaint, Peninsula Petroleum claimed that Crystal Cruises owes the firm $4.6 million dollars in unpaid fuel bills, including $1 million from the Crystal Symphony alone, according to Local10.

According to court documents, “Peninsula has not been paid for the maritime necessities provided to the vessel, and therefore proceeds to arrest it.” A Miami-based judge issued a warrant saying officials can seize the ship, NBC Miami reported.

The Crystal Symphony cruise left Miami on Jan. 8 for a 21-day through the Bahamas. It was supposed to return to Florida on Jan. 29, media reports say.

Crystal Cruises announced earlier this week that it was suspending operations through late April. Besides Crystal Symphony, it has two other ships currently cruising, which end their voyages on Jan. 30 in Aruba and on Feb. 4 in Argentina.

“Suspending operations will provide Crystal’s management team with an opportunity to evaluate the current state of business and examine various options moving forward,” said the company in a statement earlier this week.

The Epoch Times has contacted Crystal Cruises for comment.