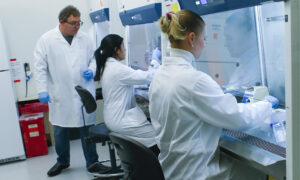 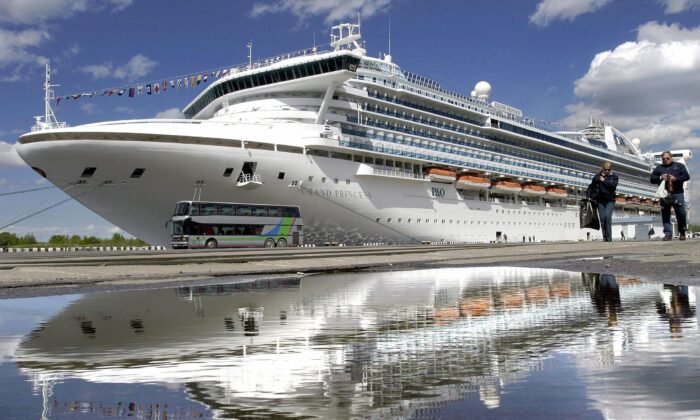 One of the biggest world cruise liners in the world, the Grand Princess, is pictured in a file photograph. (Stringer/AFP via Getty Images)
AMERICA

California officials are blocking a cruise ship from docking in San Francisco after a passenger from the ship’s previous voyage died on Wednesday.

The Grand Princess went on a 10-day roundtrip to Mexico in mid-February before picking up new passengers and leaving for Hawaii. It was on its way to Ensenada in Baja California when a patient who was on the previous voyage died from the virus, prompting the ship to head back to California.

The ship, which was originally scheduled to dock on March 4, is now being held about a day off the coast, California Gov. Gavin Newsom said at a press conference late Wednesday.

“The ship will not come on shore until we appropriately assess the passengers,” he said.

Some 60 people who were on the trip to Mexico are on the new cruise and all will be tested. Eleven passengers and 10 crew members were showing symptoms consistent with COVID-19, the disease the virus causes, as of Wednesday evening, officials said.

Test kits are being flown to the ship and samples will be quickly ferried to the state laboratory in Richmond to confirm or rule out the suspected cases. That process was expected to be completed by Thursday night, according to Newsom.

Discussions are ongoing with federal officials and the ship could be directed to a port other than San Francisco, Newsom said. The ship has thousands of passengers on board, as well as crew members.

“We’ll provide as much time as needed to secure the safety of everyone on board, secure their health, and then more broadly that potentially could be impacted by thousands of people disembarking and then going to many ports of calls, through airports large and small, not only through the state of California but throughout the United States and throughout the rest of the world,” he said.

Two passengers from the previous voyage have already tested positive for the new virus, including the elderly patient who died. Officials in Placer County, where the death occurred, said that it was monitoring 10 workers from Kaiser Permanente Roseville and five emergency responders who were exposed to the patient before the case was placed in isolation.

The other patient is in Sonoma County and is “very difficult condition,” Newsom said.

Officials across the country are working on getting in touch with passengers who were on that voyage, which departed San Francisco on Feb. 11 and returned on Feb. 21. By one estimate, over 50 percent of the 2,500 passengers on that cruise live in California. Officials have the manifest and are working with local health departments to locate the individuals. The Centers for Disease Control (CDC) is working on the same process for passengers who live outside the state.

The ship is operated by Princess Cruises, which is owned by Carnival Corp. The company also owns the Diamond Princess, the ship that was quarantined in Japan last month before becoming one of the largest clusters of coronavirus cases in the world.

Officials of the company said in a letter Wednesday to passengers that there are no confirmed cases of COVID-19 currently on board but that the CDC has identified “fewer than 100” passengers and crew members who will be tested before the ship arrives in San Francisco. Those people have experienced flu-like symptoms.

All the passengers and crew identified for testing were restricted to their cabins for the time being.

“You may order room service while you wait for the medical screening to be completed, and we apologize for any inconvenience,” Dr. Grant Tarling, the ship’s chief medical officer, told passengers.

The scheduled Grand Princess voyage slated to start on March 7 was canceled and all passengers were receiving a full refund of the cruise fare and airfare, along with a cruise credit.