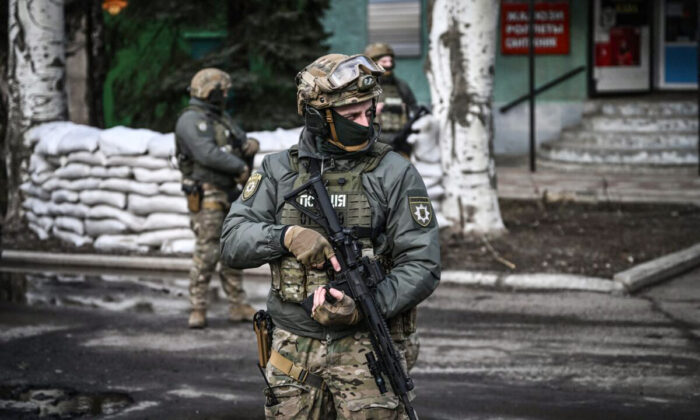 ‘Cruel’ for NATO to Leave Ukraine to Fend for Itself: Diplomacy Expert

A diplomacy expert has lambasted the transatlantic defence bloc for leaving Ukraine to fend for itself and warned that the entire episode could undermine confidence in the global rules-based order.

“I thought it was morally repugnant for the west to encourage Ukraine to take on Russia without providing manpower or funding—along with the idea that 100-200,000 Ukrainians have to die by themselves without help. I think it’s ridiculous,” Joseph Siracusa, adjunct professor in international diplomacy at Curtin University, told The Epoch Times.

“I think there’s something really wrong with NATO, which consists of 30 countries? To allow a near neighbour to go to battle with a Goliath,” he added.

“They wouldn’t give Ukraine air defence systems because they thought, number one, they couldn’t handle it, and number two, it would fall into the wrong hands. So, the Russians control the sky and it’s just a matter of time before they break the place down.”

On Feb. 24, Russian President Vladimir Putin announced a “special military operation” in response to alleged threats from the Ukrainian government.

Moscow then launched a multi-prong attack via land, sea, and air into the country. Currently, Reuters is reporting that there have been 137 Ukrainian defence personnel and civilians killed and hundreds of casualties have been reported, with the population either sheltering, taking up arms, or attempting to flee the major cities.

The latest move comes after months of build-up from Russian forces along Ukrainian borders, which European and U.S. leaders have condemned.

However, a desperate Ukrainian President Volodymyr Zelensky on Feb. 19, called for action from world leaders, warning that the European “security architecture” could not be repaired and needed to be replaced.

“It crashes again because of different things: selfishness, self-confidence, irresponsibility of states at the global level. As a result, we have crimes of some and indifference of others. Indifference that makes you an accomplice,” he told the audience at the 58th Munich Security Conference.

“I hope no one thinks of Ukraine as a convenient and eternal buffer zone between the West and Russia.”

Since the invasion, multiple nations have imposed several tranches of sanctions against Russian banks, individual oligarchs and their families, and the company behind Nord Stream 2—the major pipeline set to provide gas from Russia to Germany. Putin was not named in any sanctions.

Siracusa noted that world leaders were attempting to create internal pressure on the Russian leader but were still pessimistic on the use of such measures.

“What NATO and the West were doing was to pretend that those sanctions were a deterrent. Sanctions are not a deterrent; they are a punishment. A deterrent by definition is ‘fear and retaliation,’ and Putin and the rest of these guys had nothing to fear in terms of retaliation,” he said.

Regarding tensions on the other side of the world in the Indo-Pacific region involving Beijing, Siracusa said the Ukrainian saga could undermine confidence in regional alliances and that world leaders needed to step up.

“Maybe at the end of the day the 195 nations on earth are on their own?” he said.

“The real lesson for defence planners is that if they think alliances are ironclad, or if they think they’re in the company of people who will come to their aid—the Ukraine situation will be a cautionary tale for countries like Australia on how far the West and the United States will go for an individual country.”