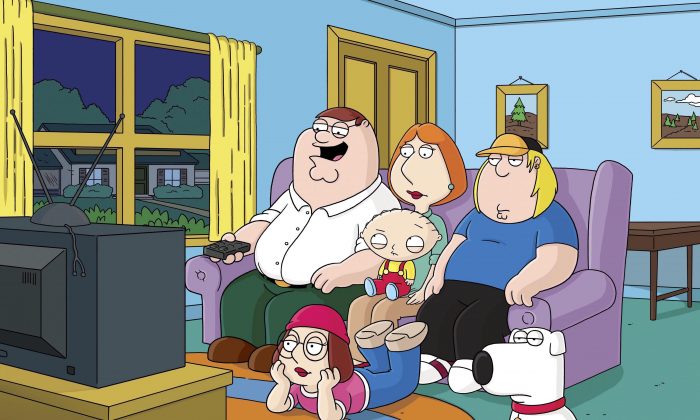 Everyone watches TV in "Family Guy." The CRTC is inviting Canadians to have their say on the future of the television system. (The Canadian Press/AP, Fox)
Canada

With Canadians increasingly using a number of different platforms to view their favourite TV shows and movies, coupled with long-standing dissatisfaction with the current bundling of TV shows by providers, Canada’s telecom regulator is seeking the public’s input before bringing in new rules.

The Canadian Radio-television and Telecommunications Commission plans to consult with industry and then set out new regulations governing the Canadian television system to keep it usable and competitive.

But first it wants to hear from Canadians, and people are encouraged to use the CRTC’s discussion forum Let’s Talk TV! to express their views about how programs are currently offered—what works, what doesn’t—and suggestions on changes they would like to see. The forum began Aug 21 and ends Sept. 19.

“The Let’s Talk TV conversation is all about ensuring that the television system is able to adapt to changing technologies and viewing habits in the coming years,” CRTC chairman Jean-Pierre Blais said in a press release.

“We encourage Canadians not to miss out on this opportunity to influence the final outcome and help shape the future of television in Canada. After all, it’s their television system. The only way we can make sure it meets their needs is if they participate.”

The regulator has published a working document that outlines, in an easy-to-read table, the items to be discussed during a public hearing scheduled for Sept. 8-19 in Gatineau, Que. The document presents a new framework and will also help focus the online discussions.

However, the CRTC notes that the working document is not a finished product but rather a tool that outlines themes up for discussion, proposed solutions/changes, and the consequences of implementing each proposed change.

The CRTC started the process of obtaining input from Canadians and of looking at the issues that may need revision last fall and has indicated that any changes to the regulatory framework for TV services and how they are presented to consumers will be implemented by Dec. 15, 2015.

The working document is based on the thousands of comments the regulator received in the first two phases of the project. Those comments and findings of requested reports can be viewed at www.crtc.gc.ca.

Canadians can use the forum to comment as often as they like about items in the working document; comments as they are posted on the forum; the current TV program offerings; and the public hearing discussions, which can be heard via live audio feed on the CRTC website in September throughout the hearing.

The regulator has stated that it wants any changes to the TV system to maximize choice and flexibility, further Canadian programming, and provide quality programming to Canadians.

Feedback from some consumers indicates that program packages are too large and contain channels they aren’t interested in and don’t use. TV program bundling has been likened to forcing shoppers to buy eggs, fish, and milk when they only went to the store to buy apples.

Unbundling of packages is expected to be part of the new framework, allowing consumers to choose and pay for only the channels they want. Basic packages will still be available for those who see it as a less expensive option, and channels can be added to create customized bundles and thus provide more flexibility and choice.

Other issues to be covered at the public hearing include issues such as hardware that is not user-friendly for sight-impaired users and improving closed captioning for hearing-impaired viewers.

Canadians are also looking for clear and understandable presentation of the channel options, lower cost overall, and improved customer service.