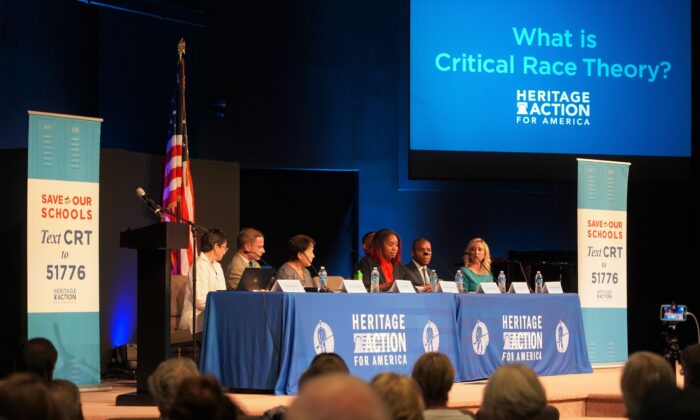 The Heritage Action for America, a partner organization of the Heritage Foundation, hosted a panel discussion on critical race theory (CRT) in Georgetown, Delaware, on July 29. Six speakers stressed the dangers of CRT and how it has penetrated American society. One speaker compared the similarities of CRT and China’s Cultural Revolution.

About 500 people attended the event in person, while thousands watched it via livestream.

At the beginning of the panel discussion, Jonathan Butcher, senior policy analyst at The Heritage Foundation, talked about the history of CRT and what it’s all about. He said CRT, an offshoot of Critical Theory from the neo-Marxist Frankfurt School, is built upon Karl Marx’s ideas and has slowly and methodically worked its way into American society, infecting the education system, workplace, military, and everything in between. He added that CRT is destructive and advocates for the exact opposite of what it claims to be—treating individuals differently based on the color of their skin.

CRT adherents believe America is systemically racist, that racial oppression exists in every institution, and an individual is either an oppressor or oppressed based on the color of their skin. They reject the idea that America has strived, for more than two centuries, to fully live up to the founding creed that all men are created equal and should be treated so under the law.

Keynote speaker Xi Van Fleet told the audience that America is starting to feel like communist China during the Cultural Revolution—a sociopolitical movement that occurred between 1966 to 1976 under former Chinese leader Mao Zedong.

“We have been seeing that America is going the wrong direction,” she said, in reference to CRT.

Van Fleet was attending elementary school as a first-grader when the Cultural Revolution began. After she completed her education, the Chinese Communist Party (CCP) forced her and other young adults to work in the countryside for three years.

After the panel discussion, Van Fleet told The Epoch Times, “It’s the same tactic; it’s Marx’s tactic. So what they do is to create chaos. As Mao said, ‘When the worst chaos emerges, that is when the greatest control can be achieved.’ They want to create chaos so that they [can] overthrow the existing system. … Cancel culture is the same because what the people [want to] do here is to overthrow the American founding [principles], just like [in] China–to overthrow the traditional culture and our civilization.”

“I did not really want to go … public. It is difficult for the Chinese; most of us would rather be quiet. But now I feel like it’s really not about me. It’s about America.”

She continued, “I want Americans to know that what’s happening today is communism taking over.”

“The grandfather of CRT and the CCT is the same guy, Karl Marx. And the ideology is cultural Marxism,” Van Fleet said. “Just like CRT, Mao’s CCT divides people into groups: [the] oppressors and the oppressed. The only difference is … class rather than race.”

Van Fleet said that during the Cultural Revolution, everyone can be a class enemy; that is Mao’s way to ensure he always had an ample supply of fake class enemies. Similarly, CRT creates fake racial divisions, and redefines the concept and the definition of racism. “So divid[ing] people and pit[ting] them against each other is the hallmark of Marxism, and that is the business model for the CCP and CRT,” she said.

During the Cultural Revolution, Van Fleet witnessed how students were violent with each other and with their teachers. She said Mao launched the Cultural Revolution by unleashing the Red Guards to create chaos. The Red Guards were communist youth who were led by Mao to persecute those who were identified as the CCP’s enemies. They resorted to violence, looting, rioting, and destroyed all the known enforcement and court systems. “That’s exactly what we saw on American streets last year,” she said, referring to the riots organized by Black Lives Matter activists. Furthermore, Van Fleet believes that there’s no difference between the social justice warriors today in America and Mao’s Red Guards.

She believes the United States is experiencing a culture war. “Cultural Marxism and American ideals, there’s no common ground.”

Van Fleet concluded, “We have to fight this war and win it to preserve America.”

Marilyn Booker, the chairperson for the Sussex County Delaware Republican Committee, told The Epoch Times: “Hearing Xi Van Fleet speak about what went on in communist China, and her being able to draw those parallels to what’s happening in this country, I found it fascinating and scary, to be perfectly honest.” Booker added: “We are a meritocracy, where we used to be, and we need to continue to be, so there will be people who will do better in some things than others.”

Jim Boothby, the pastor of the Mountain State Baptist Church in West Virginia, told The Epoch Times that he was also impressed by Van Fleet. “In Mao’s China, she experienced it with her flesh, with her body. It’s not about reading a book to her.” Boothby said Van Fleet told him two days ago: “We are further down the road of our cultural revolution in America, which may result in a similar type of disaster [as China’s Cultural Revolution].” He added, “Prescient words. Scary words.”

Boothby shared that anti-CRT proponents won three seats on the five-person school board which used to support CRT in Queen Anne’s County in his home state of Maryland. He said they have worked very hard to stop CRT because it’s deeply connected with communism. “This is the secret: school boards elect the right people,” he said.

Another keynote speaker, Joe Mobley, a podcaster, agreed with Van Fleet’s views on communism. “I think, as Xi Van Fleet said, the [communist] indoctrination has gone on for at least 60 years, maybe as much as 100 years. So the institutions are indoctrinated from the military to the financial institutions, to schools; universities are completely far gone,” he said.

Mobley believes that religious freedom is still pushing back against communism under the protection of the constitutional rights of the First and Second Amendments.

Carmela Ciliberti, a lawyer running for clerk of courts in Chester County, Pennsylvania, told The Epoch Times after the panel discussion that she felt “inspired.” “It’s just heartwarming to see others stand up, speak so clearly about the threat that we face here in America, and work to get the grassroots motivated to push back on these ideas.”

Ciliberti said, “I think hearing the personal stories, especially from Xi [Van Fleet], clearly described what we have ahead of us and what is currently being used. It’s the same skeleton that we find here.”

Walt Babich contributed to this article.