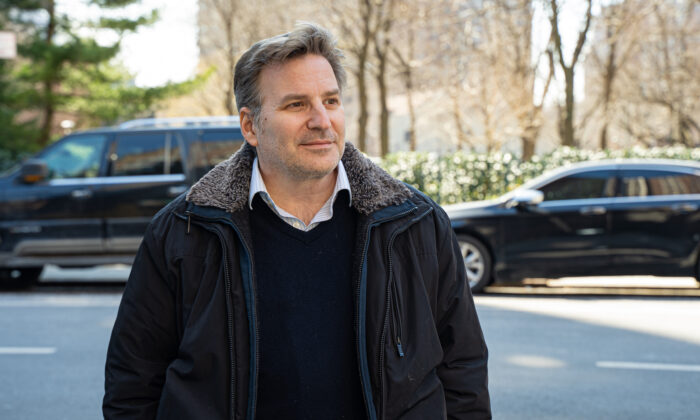 Paul Rossi says some level of societal indoctrination is inevitable in education, but when students are taught an explicit political ideology and prohibited from questioning those teachings, the results are damaging, the former teacher said.

Rossi, who taught high school mathematics and persuasion at Grace Church School in Manhattan for 10 years, left the school in 2021 after publishing an essay titled “I Refuse to Stand By While My Students Are Indoctrinated” on the blog of former New York Times editor Bari Weiss.

“What was happening was explicitly a political indoctrination that was based around the idea of a moral imperative … a collective morality, which focused on certain maxims like ‘impact regardless of intent,'” Rossi said in a March 24 interview for the EpochTV program “American Thought Leaders.”

Students and faculty at Grace Church School were taught, and expected to abide by, the tenets of critical race theory (CRT), a race-based ideology that divides people into classes of “oppressors” and “oppressed,” he said.

This type of ideology is causing damage to students “because it’s cheapening, it’s warping, it’s diminishing the individual,” he said.

Rossi, who considered himself a left-leaning liberal at the start of his tenure at Grace Church School, said he initially embraced the school’s equity and diversity training as benevolent, but that he soon saw how destructive this type of indoctrination was and how it lacked objectivity and truth-seeking.

He said there was an understanding that you could traumatize and harm someone else merely by sharing an opinion that was unwelcome or provocative.

“This created a kind of environment where certain politicized ideas—ideas about race, ideas about identity, ideas that align with the left-liberal wing of the Democratic party blatantly, ideas about climate change—these were not open to discussion,” Rossi said. “Or if they were they, were done in a very perfunctory, dismissive way.”

Rossi provided an example of how CRT might be discussed.

“So, you [a white person] could profess to say that, ‘You know, no, I really try to treat people equally based on their personality or interactions,'” Rossi said. “And an anti-racist moral schema [would presuppose] ‘But no, actually your biases prevent you from behaving that way, and furthermore, you don’t even know what your biases are. You need to rely on the diversity, equity, and inclusion experts to tell you what those are, or for a person of color to “school” you or call you out in certain situations that you may not be aware of.'”

He said he was disturbed by how the students were being taught to supplant their own worldviews, their perceptions, with the view held by anti-racism experts that people are limited by their social identities and biases.

After Rossi questioned an anti-racism trainer during a school videoconference session, he was told he’d caused people harm and that, if he wanted to return to the school the following year, he would need to attend “restorative justice training” led by the school’s Office of Community Engagement, which handled diversity, equity, and inclusion issues.

“When I asked what that session would entail, what were the things that I would have to do, what would it mean to participate, I wasn’t given any details,” he said. “I was just told, ‘Look, you just need to sign or not sign.'”

It was at this point that Rossi wrote his essay, after which he was banned from teaching at the school, which he knew could be an outcome of speaking up against CRT ideology.

“In the four or five days after my article came out, the school contacted me, and they said, ‘Well, since the community is upset with you, and they feel harmed by you, we’re going to reassign all your classes.'”

A Type of Religion

Rossi compared anti-racism and critical social justice ideology to a religion that has taken over both public and private institutions.

He said that because morality has been somewhat drained from public life, schools are looking for a way to instill ethics and morals in their students. Many private schools had religious pasts, he said, but those religions have been supplanted by a different religion, the religion of critical social justice.

Rossi said he thinks the only way to rid schools of this type of divisive system is to have teachers, parents, and especially students push back against this obsession with identity and tribalism.

“It’s really, kind of, institutionally sanctioned cliques,” he said. “What I’d like to see is to see students say, ‘You know, my identity isn’t your business. I’m here to learn to read. I’m here to get skills. I’m here to, you know, do math and calculus and algebra, and all the things that are going to help me in life and help the people I love. I’m not here for you, to be your guinea pig about what identity it is, or what gender I am, or what my sexual preferences are.'”

The former math teacher said the left’s version of diversity and inclusion is superficial and primarily focused on skin color, not intellect or character, and is reminiscent of Karl Marx’s conflict theory.

Conflict theory, first put forth by Marx, purports that social order is maintained by domination and power, rather than by consensus. The theory holds that those with money and power (in the current period, that would be white people) try to maintain that power at any cost, especially by exploiting the poor (nonwhites).

“What it’s creating is an intellectual monoculture. No matter what your skin color, you ascribe to this particular worldview around critical consciousness, critical social justice,” he said.

Teachers are looking at students and teaching them to evaluate ideas not based on truth, but rather based on the marginalized status of the person proposing the idea, he said.

To the left, if everything is a catastrophe, such as the threat of climate change, then extreme responses are justified, said Rossi.

“You have that same logic playing out around the extremism if, say, I questioned the riots,” he said, referring to widespread looting and riots across the country in 2020 after the death of George Floyd.

“If I say, ‘Well, you know, burning down property is wrong,'” Rossi said, the response might be, “‘Well, you don’t care about black lives, and riots are the language of the unheard.'”

Rossi said if the student questioning the riots responds by saying he or she cares about everyone, including the business owners and everyone trying to earn a living, and that, after the riots, no one will invest in that community, the leftist will retort that they’re supporting capitalism, and that capitalism is slavery.

“These are really thought-terminating clichés that just shut down conversations, because the moral purity and the moral clarity of who’s good and who’s bad is unquestionable,” he said.

Rossi said he’s watched hundreds of hours of diversity, equity, and inclusion training and tries to expose these videos, but once he writes about them, the clips are taken down because the CRT proponents don’t want scrutiny.

Returning to the Classics

Rossi said the solution to this type of indoctrination is for parents to be involved in their children’s education and insist on getting back to classical education, where students are taught to think critically and study their subjects with more rigor.

“The classics belong to everyone. They are not just Western civilization,” he said. “They’re everyone’s birthright, and to deny those things to people just based on the color of their skin or because the people who said those things don’t look like you, that’s criminal,” said Rossi.

“These are the ideas, these are the thinkers that made our society possible. You cut people off from that, and you cut civilization off at the knees,” he said. “You cut all the things that are the engine of progress.”

Rossi advised parents to develop strong communication with their children and teach them the warning signs to look out for, such as when a teacher gets too invasive and asks them about personal issues of gender, race, or sex.

“So, they’ll have affinity groups, based around gender and race or ethnicity where they bring the child into these little lunch groups, and they’ll try to foster racialized identity, belonging, that kind of thing, gender, and I’ve seen teacher training where the presenters will say, you’ll be amazed what a kid does for a bag of Hot Cheetos.”

“But rather than those commonalities, developing organically, they are paid for by the school, they are supported by the school they are invested in by teachers that have an agenda. They’re all part of the critical consciousness program.”

Rossi said parents should look to see if the school has a diversity, equity, and inclusion director and what that person’s goals are, and also check if the child’s school collaborates with any universities that are pushing these ideologies.

But ultimately, Rossie said it’s best to homeschool children to avoid all this.