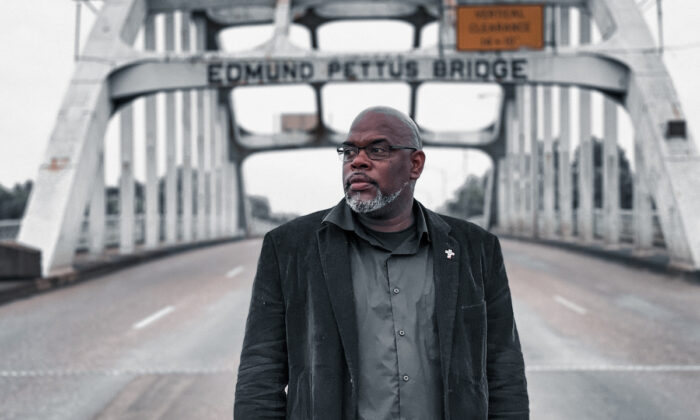 Rev. Brian Hawkins doesn’t try to hide his troubled past. He believes in learning from mistakes, and he admits he’s made a few.

An ex-felon who spent 10 years in state prison for a series of low-level crimes, Hawkins eventually turned to faith. He is now a married Christian pastor and a devoted family man who cares deeply about his children’s education. Last year, he was elected to the city council in San Jacinto, Calif., and he’s running for Congress in 2022.

Hawkins, 43, believes in truth, forgiveness, and redemption, which are some of the many reasons he rejects critical race theory (CRT).

“I’m teaching my children how to respect people, how to care for all people. We’re teaching our children to not think of themselves more highly than anyone else, to have work ethic and positive attitude and mindset,” he said.

Last fall, Hawkins, his wife, Terri, and their children drove cross-country to Washington, D.C., where he stood in front of the slave auction block at Smithsonian’s National Museum of African American History and Culture.

“Had I not been able to see that stone, I wouldn’t have been able to tell my children that part of history,” said Hawkins.

“I said, ‘Listen, we’re looking at this through a museum, but 150 to 200 years ago, there were actual slaves—blacks or African Americans—who actually stood on this. But we’re not standing on this block anymore,” Hawkins said.

“So, my daughter looks at me and says, ‘Dad, we’ve come a long way.’ That moved me,” he said. “When you remove history, you don’t get to tell history. You don’t get to explain history.”

The family journeyed to Jamestown, Virginia to see where the first slaves were brought to America, to Washington, and to New York to see the Statue of Liberty and Ellis Island to learn about immigrants who fled other countries to come to America for a better life.

“We wanted our children to learn history, not to hate people or not to look down on people for the color of their skin, or to blame the past or that someone else is responsible for your future. You charter your own destiny,” Hawkins said.

“We’re Christian and we’re raising out children in a Christian home, and so it’s alarming that my children have been subjected to so much hate and anger. … Those are the things that really bothered me in 2020.”

The anger that filled the streets and “really the atmosphere” during the summer of 2020 affected his children, he said, but as parents he and Terri were able to help them find their way through the crisis.

“I noticed that it put my kids in a different mindset from what we really wanted to teach them,” he said.

“I want to show them what life really is. I don’t have to teach my kids that we’re in 1963, 1854, or 1921, or different periods of time in history that are ridden with atrocities. I can teach my kids where we are right now.”

A Tale of ‘Equity’

With California’s Reparations Task Force talking about ways to close the wealth gap between black and white Americans, Hawkins, who is a descendant of slaves, likes to tells a different story about equity and incentives from the perspective of his nine-year old daughter, Naariah.

“She really looks up to me,” he said. “When I ran for council, she ran for school council, and she won last year. She was excited.”

Not long after Hawkins announced he would run for Congress, the fourth-grader decided to run for the Eagle Elite Student Leadership Team at her school the San Jacinto Unified School District (SJUSD).

To qualify, students must campaign for the position. They were required to create an advertising poster board, take it to school, and talk to other students about why they were running for Eagle Elite and why they wanted to be a leader.

“So, my daughter over the weekend makes this beautiful board. She uses Stephen Covey’s [book] because she goes to a school where they use a curriculum from Seven Habits of Highly Effective People,” Hawkins said.

She was one of three students to vie for Eagle Elite but the only one to make the poster.

“Nobody else did it,” Hawkins said.

Theoretically, because her opponents hadn’t followed the rules, they should have been disqualified, but they weren’t, he said.

Naariah campaigned on the issue, asking her schoolmates to vote for her because, unlike her opponents, she had followed the rules. But then her teacher announced all three students had won.

And, even though the teacher later whispered to Naariah she had earned the most votes, Hawkins said Naariah was disappointed.

The message of equity, social passes, and trophies for all is sending children the wrong message, that they don’t have to try to win, he said.

“It discouraged my daughter because she put forth all the effort to win only to turn around and find out that her efforts were meaningless because they were all winners,” Hawkins said.

When Naariah came home from school with a teacher-recommended reading list that included a children’s book about Black Lives Matter (BLM), Hawkins decided it was time to get more involved in her education.

The book, “A Good Kind of Trouble,” essentially encourages young kids to get involved in the BLM movement, he said.

Hawkins ordered the book so he and Naariah could read it together.

The book’s main character, Shay, is allergic to trouble. Her sister Hana is involved in Black Lives Matter and after attending a protest, Shay decides some rules are worth breaking and wears an armband to school in support of the BLM movement.

“Tensions are high over the trial of a police officer who shot an unarmed Black man. When the officer is set free, and Shay goes with her family to a silent protest, she starts to see that some trouble is worth making,” is how Publishers Weekly describes the book by debut author Lisa Moore Ramée on its anti-racist children’s and young adults reading list.

But the lesson Naariah learned wasn’t the same. After reading the book, she told her dad she would never join BLM and that “it wasn’t for her,” Hawkins said.

Amazon describes the book as a “funny and big-hearted debut middle grade novel about friendship, family, and standing up for what’s right,” but Hawkins doesn’t buy the assumption BLM is fighting for a just cause.

To advance its own opportunistic and Marxist agenda, BLM has reopened old wounds to portray a false sense of history that ignores the fact slaves were freed more than 150 years ago, he said.

“They want to make it seem like it never happened so you can keep people in that mindset as though it’s still happening,” Hawkins said.

During the summer, Hawkins attended several different school board and regional government meetings to protest CRT being taught in California classrooms under the guise of ethnic studies.

Newsom signed the bill in the wake of the National School Board Association (NSBA) comparing angry parents protesting ethnic studies at school board meetings in recent months to a form of “domestic terrorism.” The NSBA later apologized for the remark.

The mainstream media has “hijacked” the conversation on CRT and pushed it to “uncomfortable levels” for many parents and students, he said.

At a Desert Sands Unified School District (DSUSD) board meeting in Riverside County, Hawkins urged the board of trustees to abandon the ethnic studies program which he sees as divisive and destructive. He asked trustees to level with parents about the intent of the curriculum and admit that it’s connected to CRT.

Many school board members, principals and teachers who claim CRT isn’t part of the ethnic studies program “have never studied critical race theory to qualify that,” Hawkins told the board at a July meeting.

Hawkins cited Dr. Kimberlé Crenshaw, a leading scholar of CRT and professor at UCLA Law School and Columbia Law School. Crenshaw is best known for developing the theory of “intersectionality,” a term she coined in a 1989 paper, “Demarginalizing the Intersection of Race and Sex: A Black Feminist Critique of Antidiscrimination Doctrine, Feminist Theory and Antiracist Politics.”

“So, to suggest that ethnic studies is not critical race theory, well, that’s far from the truth because right in your own curriculum is the word intersectionality,” he said. “To sit up here and play parents as though they’re not intelligent is going to be the worst mistake that you can ever make.”

Rather than ranking students on their level of “privilege” and portraying people of color as “the oppressed” and white people as their “oppressors,” schools should be teaching about children about freedom and equal opportunity, not pushing for guaranteed outcomes in the form of equity, Hawkins said.

“I’m teaching my children not to be angry at white people, not to be mad at history, but to understand it,” he told the board.

In the words on one principal, he said, it could “mess up a lot of students if the wrong person teaches ethnics studies.

“That’s a concern for me. The only people that are qualified to teach this class are totally biased. And, if you don’t think … black folks are prejudiced towards white people, you’re fooling yourself,” Hawkins said.

“There’s anger out there and society is feeding into that narrative. I grew up in the inner city, I know what it’s like,” he said. “I know the conversation that they’re having at barbecues and salons. Some of them won’t be honest enough to tell you, but they have been waiting. … There are some folks that are really ready for anarchy in this country.”

Hawkins said “it hurt” to see protesters burning the American flag on the Fourth of July. He celebrates Independence Day and Juneteenth because he believes “there’s a space in all of this for everybody to be equally respected.”

Hawkins told the board said he’s talked to Riverside County Sherriff Chad Bianco to “be a bridge” between law enforcement and the community.

“That’s something that I love calling myself—a bridge—because that’s what we need in society,” he said.

Hawkins warned if nothing is done to promote unity rather than the divisive rhetoric of CRT in California classrooms, eventually the blame will fall on the shoulders of school boards who refused to stand with the parents.

“It’s only going to get worse. And guess what? Some politicians are banking on this. Racism is a huge hustle,” he said.