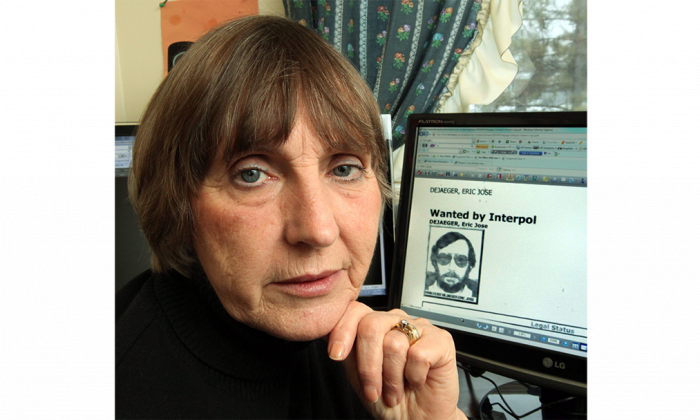 Sylvia McEachen is shown at her home in Fitzroy Harbour, Ont., with an image of Eric Dejaeger on her computer behind her, in March 2011. McEachen was instrumental in having Dejaeger returned to Canada from his native Belgium to face sex-abuse charges. The former Oblate missionary is facing sentencing on 32 counts of sexual abuse committed when he was stationed in Igloolik between 1978 and 1982. (The Canadian Press/Fred Chartrand)
Canada

IQALUIT, Nunavut—Prosecutors have asked an Arctic court to sentence a defrocked priest convicted of sexually abusing dozens of Inuit children to 25 years in prison.

“[Eric Dejaeger] appears to have no insight into why he offended and he didn’t stop until he got caught,” said head Crown prosecutor Doug Curliss.

Defence lawyer Malcolm Kempt argued that a 12-year sentence would be enough.

Dejaeger, a former Oblate missionary, is facing sentencing on 32 counts of sexual abuse committed when he was stationed in Igloolik, Nunavut, between 1978 and 1982.

Final sentencing arguments before Justice Robert Kilpatrick were made Wednesday, Jan. 21, after two days of victim impact statements. In deeply emotional testimony, witnesses from Igloolik told how they’ve been left with permanent mental and physical scars.

One man said that the smell of moldy wood takes him back to the mission’s boiler room where Dejaeger raped him. A woman told court she blames Dejaeger for the scars that have been diagnosed on her womb. Others said they still suffer nightmares.

In deeply emotional testimony, witnesses from Igloolik told how they’ve been left with permanent mental and physical scars.

Many spoke of lingering anger and depression and of attempts to flee those feelings through booze and drugs. One victim blamed her illiteracy on Dejaeger, saying she was left with a fear of school that prevented her from learning.

“They look back and think, ‘If this hadn’t happened to me, what would I have been?'”

In Igloolik, a live satellite link allowed more victims and community members to watch the proceedings at the local government building.

The Nunavut government has made extra mental-health workers available to people in court and in Igloolik to help with the mental stress.

Dejaeger was convicted in September on 24 counts of indecent assault, one of unlawful confinement, two of buggery, three of unlawful sexual intercourse, one of sexual assault and one of bestiality. He pleaded guilty to eight sex-related counts at the start of the trial.

The victims include 12 boys and 10 girls. Most were between the ages of eight and 12, although they could have been as young as four and as old as 18. Dejaeger also abused a dog in front of two children.

Many testified at trial that Dejaeger used his position to trap them into sex, threatening them with hellfire or separation from their families if they told. Sometimes he dangled food in front of hungry children as a lure.

He is to appear in Edmonton on Friday on four separate sex-related charges.

Dejaeger has already served one five-year sentence on 11 counts of assaulting children in Baker Lake, Nunavut, where he was posted after Igloolik.

It was in 1995, after he had served that sentence, that he learned RCMP were about to charge him for his activities in Igloolik. Before his court date arrived, he fled to his native Belgium.

Oblate officials have acknowledged that they knew Dejaeger was about to depart. They have also said that Canadian justice officials suggested that the easiest thing was for him to simply leave Canada, where he had become a citizen. They have said Dejaeger was told he wouldn’t be bothered if he stayed away.

For 16 years, he lived quietly in homes maintained by the Oblates despite an international warrant for his arrest. Eventually, journalists revealed that Dejaeger was living illegally in Belgium. He was returned to Canada in 2011.