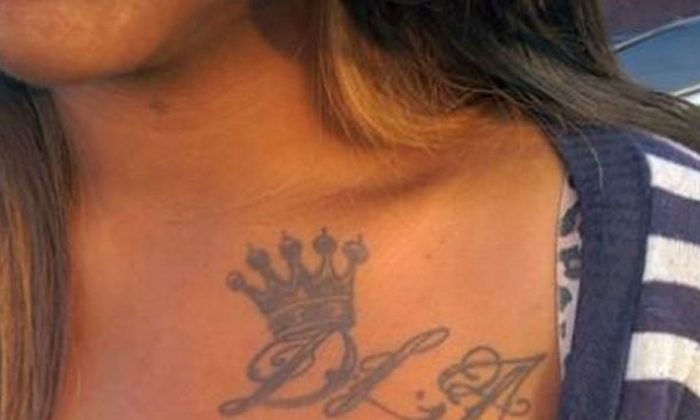 ‘Crown’ Tattoos Have an Unexpected Meaning

Thousands of women across the United States are being forced to get tattoos that have a disturbing meaning.

The “crown” tattoos indicate that the women are under the orders of a certain pimp, who typically forces the women to also get their name or initials inked on them as well.

Jennifer Kempton was one of these women, a sex slave before she escaped. Now she speaks out about what happened to alert people to the problem.

Jennifer’s first tattoo was straight-forward–“Property of Salem,” her first pimp. A crown was later added, accompanied by “King Munch,” the name of her pimp at the time.

Many women are forced into prostitution at a young age, sometimes as young as 12 or 13, by men who get them addicted to drugs and then only provide the drugs in exchange for sex work.

Even if the women are able to escape the horrible situation, they’re left with the scars of the crowns. That’s why Jennifer’s organization Survivor’s Ink helps to cover up the tattoos.

“It very much so is a psychological form of bondage,” Kempton told CNN.

“It ties you to those memories and it ties you to those feelings that you felt when you got that and to be able to be free of enslavement and then to make an active choice of, ‘This is what I want on my body, not this man’s name or this gang’s symbol, I want my daughter’s name, I want a beautiful flower, I want a religious scripture, I want a butterfly to show that I have wings, and I can fly.'”

Instead of just removing the crown tattoos, Survivor’s Ink turns the symbols into something else with the assistance of skilled tattoo artists.

Apart from looking into to donating to or otherwise helping the organization, you can also keep an eye out for women with crown tattoos. If you see one, they may need help in getting out of their situation.

Demand for online sex-trafficking has dropped as the operators of smaller sites struggle to stay afloat, following the shutdown of the largest human-trafficking portal in the United States, according to a new report shared with The Epoch Times by a counter-human trafficking technology company.

In April 2018, President Donald Trump signed into law the Stop Enabling Sex Traffickers Act and Fight Online Sex Trafficking Act, or SESTA-FOSTA, that stopped the shielding of website operators from state criminal charges or civil liability if they facilitate sex ads or prostitution. Just days later, sex-trafficking website Backpage.com was taken down by the FBI.

The report by Childsafe.AI—the world’s first artificial intelligence platform for monitoring, graphing, and modeling child-exploitation risk on the web—details how the twin acts “dramatically changed” the sex-trafficking online marketplace, specifically the distribution layer that served the underground commercial sex economy.

Now, a year later, the report explains how the industry has since been fragmented across dozens of websites, all competing fiercely for market share. No single dominant site emerged in the past year as the popularity of the online economy “remains volatile and shifts quickly.”