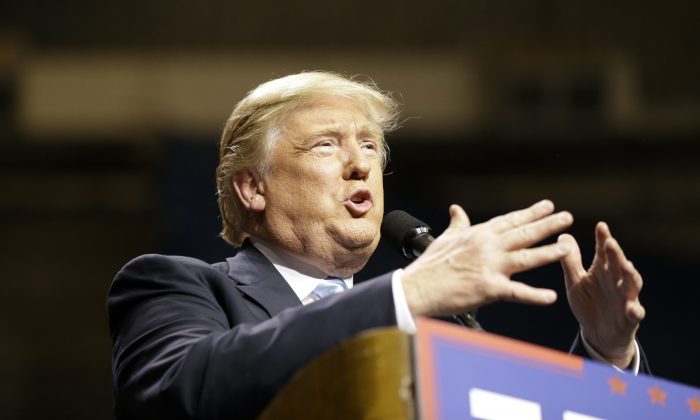 A Donald Trump supporter has been charged after punching a protester as he was being escorted out of Trump’s North Carolina rally on Thursday.

Video footage of the altercation show Rakeem Jones, 26, being punched by John McGraw, 78.

“I didn’t see it coming,” Jones, who is black, told the Fayetteville Observer.

He came from a couple of sections over and walked across the rows to hit me.
— Rakeem Jones, protester

McGraw, who is white, was charged with assault and disorderly conduct.

“He came from a couple of sections over and walked across the rows to hit me,” Jones said. “I got a glimpse before he hit me. He didn’t say nothing. He just hit me.”

The deputies who were escorting Jones out of the rally at Crown Coliseum had their faces down, looking at the steps, when McGraw punched Jones.

But McGraw was later arrested and charged.

“No one should be subjected to such a cowardly, unprovoked act as that committed by McGraw. Regardless of political affiliation, speech, race, national origin, color, gender, bad reputation, prior acts, or political demonstration, no other citizen has the right to assault another person or to act in such a way as this defendant did,” Cumberland County Sheriff Earl Butler told WB-TV.

“I hope that the courts will handle this matter with the appropriate severity for McGraw’s severe and gross violation of this victim’s rights.”