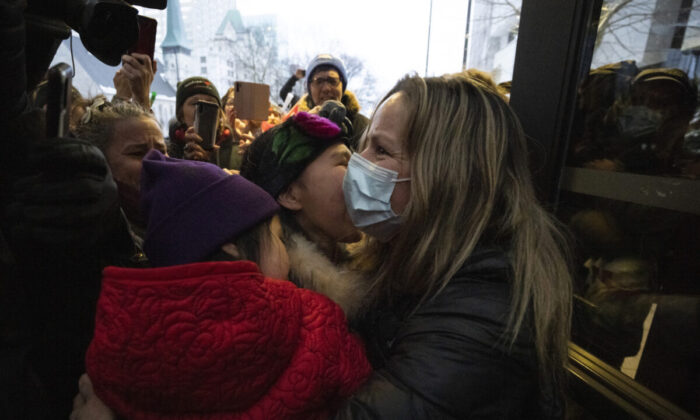 Tamara Lich, an organizer of the Freedom Convoy protest, embraces supporters as she leaves the courthouse in Ottawa after being granted bail, on March 7, 2022. (Justin Tang/The Canadian Press)
Canada

A Crown prosecutor argues that Freedom Convoy organizer Tamara Lich should be sent back to jail until her trial after accusing her of breaching her bail conditions by agreeing to accept an award that recognizes her contribution in “advancing and preserving freedom in Canada.”

Lich appeared virtually on May 19 in the Ontario Superior Court of Justice, where lawyers wrangled over how the bail hearing should proceed.

She was arrested and charged with counselling to commit mischief on Feb. 17 for her role in organizing the three-week Freedom Convoy truckers’ protest in Ottawa calling for an end to COVID-19 mandates and restrictions.

The arrest came after Prime Minister Justin Trudeau declared a state of emergency on Feb. 14, giving the police additional powers to remove protesters and vehicles parked at the national capital.

Lich was released on March 7 with a long list of conditions, including a ban from all social media and a stipulation that she not “engage in organization or promotion of anti-COVID 19 mandate activities and Freedom Convoy activities” or express support for any such events through any means.

A violation of any bail conditions can result in a fine, imprisonment, or both, according to the Justice Centre for Constitutional Freedoms, a legal advocacy group that is representing several convoy leaders in court.

The Crown said Lich has violated one of her bail conditions by agreeing to accept a “freedom award” from the Justice Centre.

“The annual George Jonas Freedom Award recognizes and honours one individual each year who has contributed significantly to advancing and preserving freedom in Canada,” the Justice Centre said on its website.

“Ms. Lich inspired Canadians to exercise their Charter rights and freedoms by participating actively in the democratic process, and took the initiative to help organize a peaceful protest and serve as one of its leaders.”

The website, which noted Lich was “unjustly jailed” for 18 days, said Lich would attend the award dinner in Toronto on June 16 if a review of her bail conditions would allow her to attend, as well as attend events in Vancouver and Calgary.

“We recognize that Canada’s legal system is founded on a principle of innocent until proven guilty. While Ms. Lich’s bail conditions prohibit her from entering Ontario, these are under appeal and the outcome of the appeal is pending,” the website said.

Lich told the court she learned she won the award for her leadership role in the protest in an email on March 28, and responded that she’d be honoured to accept.

“You were supporting something related to the Freedom Convoy,” Karimjee said as Lich appeared by video conference.

“Yeah, I guess so,” Lich replied, but said she didn’t feel it was a breach of her conditions.

She also told the court “there is no convoy anymore.”

In the notice of application, the Crown concluded that “Tamara Lich ought to be detained.”

Ottawa Sgt. Mahad Hassan told the court Lich wasn’t arrested for the alleged breach, even though police felt they had the grounds to do so after a conversation with the Crown on May 3.

The police and the Crown decided to deal with the issue at the scheduled bail review hearing instead.

Lich’s lawyer, Lawrence Greenspon, challenged the idea that the awards gala was connected with the protest. He pointed out that the event doesn’t appear to be a fundraiser for the protest movement.

Greenspon also argued that Lich’s bail conditions are too restrictive and should be reconsidered. He told the court that the social media ban imposed on his client was unnecessarily broad and has had a huge impact on her life while.

He said she wishes to be in contact with her 94-year-old grandmother through social media and communicate with her friends and family.

The hearing is expected to last two days.