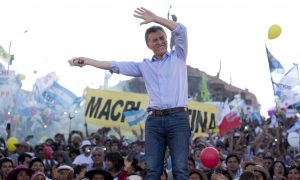 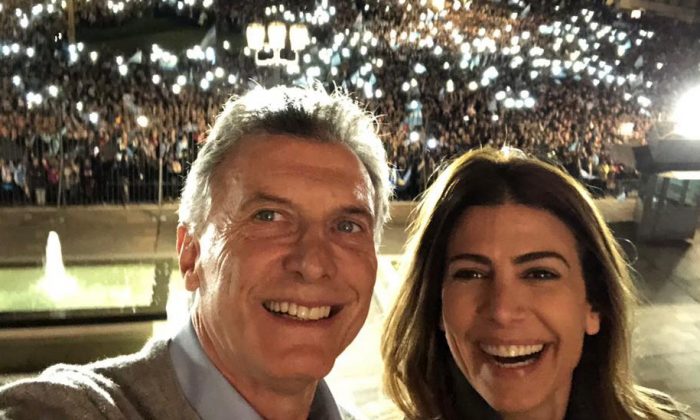 Argentine President Mauricio Macri thanks his supporters from the presidential palace in Buenos Aires, Argentina, with his wife María Juliana Awada on Aug. 24, 2019. (Facebook)
Americas

Crowds Fill Argentine Streets to Back President Macri: ‘You Are Not Alone’

BUENOS AIRES, Argentina—Tens of thousands of Argentines jammed streets in the capital and other cities Saturday to show support for free market President Mauricio Macri as the nation heads into general elections in October still beset with economic struggles.

Chanting “We can be better” and “Let’s go together,” a crowd that greatly exceeded expectations swelled outside the presidential palace in Buenos Aires just two weeks after the populist left-wing Peronist presidential ticket was shown to be leading in political party primary voting.

The buzzing crowds waved national flags and cheered, with many shouting phrases like “Argentina, without Cristina” and “Do not come back”—also directed at the former President Cristina Kirchner Fernández.

Posters reading “President, you are not alone” were also seen amid the crowds.

Kirchner was constitutionally barred from running for president again after she was indicted on corruption charges last year. She is currently standing trial.

An emotional Macri emerged on a balcony of the Casa Rosada to acknowledge his supporters, who responded to calls on social media to get out in the streets.

“How are we not going to get ahead with you? Please, we can. Of course, we can. We’re going to be better,” the president said, with tears in his eyes. He then made a gesture of hugging everyone present while saying, “I hug them.”

“Thank you for your support. I listened to you, I know what you are going through,” Macri said. “We decided to change because we can be better, we cannot leave, we have to stay together, now more than ever, because three years is little to change a story, and we are changing it.

“Telling us the truth, without stealing, without deceiving ourselves, without shortcuts, working together, dialoguing, and so we will build the Argentina we want.”

“Please, let’s stay together, it’s worth it. All together you can,” he added.

Similar but smaller demonstrations in support of the Macri government were also seen at public squares, monuments, and shopping centers across several cities, including Córdoba, Rosario, and Mendoza.

The outpouring by his backers underlined the division and polarization in Argentina, where many voters used the Aug. 11 primary elections to show support for Alberto Fernández and his vice presidential running mate, Kirchner. The two Fernández, who are not related, got 47.6 percent of the total votes cast, while Macri’s slate was at 32.1 percent.

Macri won the last election in 2015 after promising to bring an end to the cyclical crises that over the last 100 years turned one of the world’s strongest economies into a serial defaulter. But he was left with the challenge of reviving a bankrupt country after it collapsed under in 2012.

But Fernández has won supporters who are upset that after almost years under Macri, inflation is running at more than 40 percent a year and the currency has slumped. Argentinians have also had to face Macri’s tough austerity measures.

But others worry a victory by the Fernández team will bring back the populist policies that characterized the presidency of Kirchner, in which Alberto Fernández served as her first chief of staff. After news of Fernández’s lead in the primary elections, Argentine stock prices fell and the already weak peso dropped 35 percent in three days.

“Macri I give you 4 more years, Cristina we have given you enough,” one banner proclaimed Saturday.

One protester, Cristina Rizo, said she doesn’t want to see Cristina Fernández back in power. Macri’s government “isn’t perfect but I prefer that over Cristina,” she said.