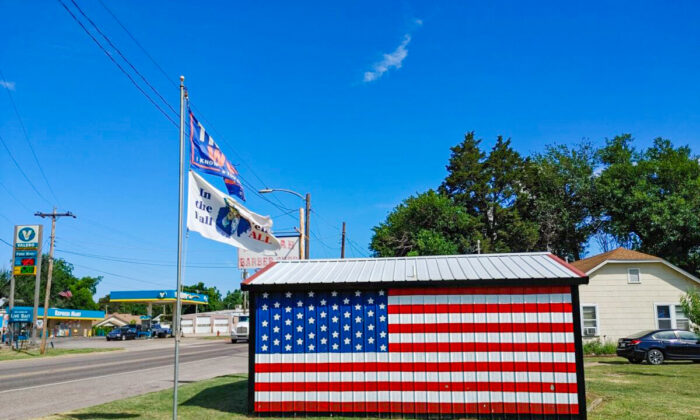 Harrah, Oklahoma, on June 28, 2022, the day of the midterm primary election in the state. (Jeff Louderback/Epoch Times)
2022 Midterm Elections

Oklahoma’s 2nd Congressional District Republican primary is headed for a runoff after no one in the crowded 14-candidate field surpassed 50 percent of the vote on June 28.

His challenger in the runoff remained to be determined with roughly 600 votes separating Josh Breechen and John Bennett, in second and third place respectively.

Frix and his Republican opponent will meet in the August 23 runoff to determine who will face Democrat Naomi Andrews and independent Ben Robinson in November’s general election.

Oklahoma’s 2nd district includes most of eastern Oklahoma from Texas to Kansas. The House seat has been occupied since 2012 by Rep. Markwayne Mullin (R-Okla.), who stepped away from that role to run for Senate to replace retiring Sen. Jim Inhofe (R-Okla.)

Mullin also advanced to an August 23 runoff in a Republican primary that featured 10 candidates.

Quapaw Nation secretary-treasurer Guy Barker gave his campaign a $770,000 loan, the most money spent in the race.

All five of Oklahoma’s seats in the U.S. House are on the ballot this year.

Hern, who sponsored the Defund Planned Parenthood Act, is endorsed by Trump.

In the 4th Congressional District, incumbent Rep. Tom Cole (R-Okla.), a member of the Chickasaw Nation who has held the seat since 2002, defeated Norman pastor James Taylor and Franke Blacke. He will face Democrat Mary Brannon in the general election.