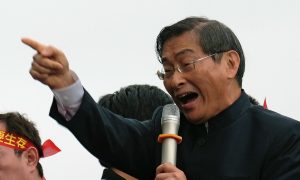 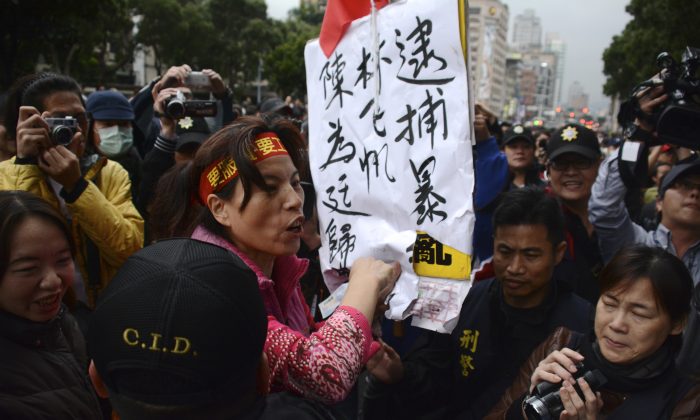 Having just finished their meal, business owner Shirley Yeh, with her brother and mother, wandered into the evening air outside Taiwan’s iconic Taipei 101 building. What they found in the square was a loud, angry band of pro-Chinese communist roughnecks, with speakers blaring as they waved the red flags of the People’s Republic of China.

The Yehs had unknowingly walked into a recent overseas initiative of the Chinese Communist Party—in large part an odd extension of the Party’s political and propaganda struggle against the Falun Gong spiritual practice, which has been persecuted in China since 1999. The group also promotes the Party’s broader agenda in its long-term goal of politically assimilating the small island nation of Taiwan.

Shirley Yeh and her mother, Winnie Chang, in Taipei, Taiwan, on Sept. 4. The pair were attacked by activists with the Concentric Patriotism Association in Taiwan. (Courtesy of Shirley Yeh)

Affronted by the yelling, Yeh’s mother, in her 70s, made her way over to ask them to turn the speaker down. That was asking for trouble.

The group began to surround and crowd in on Yeh and her mother. They pushed Yeh in the back with their flagpoles. Then one of them started kicking her mother. Yeh began yelling, so one of the men, named Hsiao Chin, thrust a flagpole, hard and sharp, into her stomach.

“I wanted to throw up,” Yeh said, recalling how the pain surged through her abdomen. One of the men yelled: “This is China! Don’t you understand? The cops don’t do anything!”

“We were stunned,” Yeh said in a telephone interview from Taipei. “I never thought that this kind of violence would take place in our civilized country, at the iconic Taipei 101 building.”

She continued: “Why have they brought the Chinese Communist Party’s political struggle to our Taiwanese democracy? They’re abusing the freedoms of our country.”

Yeh pursued legal action against Hsiao Chin, charging him with inflicting bodily injury; she will appear in court again soon.

The group, which calls itself the “Concentric Patriotism Association of ROC,” an acronym for the Republic of China, or Taiwan’s official name, set up shop outside Taipei 101 in 2010, about a year after Falun Gong practitioners began coming out to greet the flood of tourists from mainland China. The PRC-friendly policies of the Ma Ying-jeou administration had opened the doors to Chinese tourism in 2009.

Recently, police have promised to start daily patrols, after being repeatedly pressured by Taipei City councilors.

Nevertheless, police response to the group has been remarkably restrained, given the challenge to public order they pose.

Police do not routinely monitor the group, nor make on-the-spot arrests immediately following incidents of violence and abuse, even when showed video of them, according to Theresa Chu, a lawyer in Taipei who has handled a number of the cases, and who often represents Falun Gong practitioners in prosecuting Chinese officials.

Likewise, it is unclear from the recent promise of “patrols” how active the police presence intends to be.

Ten formal legal charges have been lodged against members of the group, according to Chu.

“We’ve won cases against them for slander, libel, physical injury, false imprisonment, battery and assault, and there have been some sentences, but they’re far too light, especially for the recidivists,” Chu said.

Researchers in Taiwan have traced potential links between the Patriotism Association and Taiwan’s mafia, the ruling Nationalist Party, as well as the Communist Party’s United Front Work Department, which handles some of the regime’s overseas agitation and infiltration activities. They make for a dubious cast of characters.

Zhang Xiuye, a proactive member of the Concentric Patriotism Association, and no stranger to rough tactics, holds a banner near the Executive Yuan in Taipei on April 1, 2014, calling for the arrest of student activists. (J. Michael Cole)

The most bare-knuckled of the participants is a woman named Zhang Xiuye, who was born in Shanghai and came to Taiwan in 1993 after marrying (and quickly divorcing) a Taiwanese man. She is a leading member of the Patriotism Association and has been sued in Taiwan for aggravated slander.

Then there is Su An-sheng, a colleague born in Vietnam, who spent several months in prison for kicking the former Taiwanese President Chen Shui-bian in the back, and is reported by Taiwanese media to have been involved in triad activity.

A member of the Concentric Patriotism Association hands out money to temporary workers that were holding placards attacking Falun Gong, a Chinese spiritual practice, in October 2013. (Ke-Ren/Epoch Times)

A man named Zhou Qingjun is the group’s chairman. Zhou characterizes himself as a pro-unification politician. He is known to associate with the former or current gangster Chang An-lo, widely known as “White Wolf.” Chang was a member of the Bamboo Union, a major organized gang in Taiwan, before fleeing to China in 1996.

Chang returned to Taiwan last year to begin pushing pro-unification political activities, and appears to have some degree of tacit acknowledgement by Nationalist Party political figures, who pose for photos with him, and whose administration has done nothing to prevent his public threats of violence, according to J. Michael Cole, a scholar and writer based in Taiwan who closely follows such developments.

Zhou is also an active street agitator, and can be seen in numerous photographs with his megaphone and placards. Off camera, he is reported to have in 2003 violently bashed the pro-independence activist Cao Changqing, after an encounter outside the Grand Hotel in Taipei. “It was completely the Red Guard style, like they were holding a struggle session,” Cao said afterward.

Zhou, in July, also boasted to one Mr. Huang, a Falun Gong practitioner, that his group receives $100,000 new Taiwan dollars per day, or about US$3,300, for their activities outside Taipei 101.

This may explain the meticulous documentation they make of their activities on their website, ilovroc.org.tw. Nearly every day, and sometimes multiple times a day, the website is updated to show their street campaigns—mostly flag waving and angry screaming—against meditating Falun Gong practitioners in Taiwan, or against pro-Taiwanese independence activists. Along with spot news, the website also includes extended written attacks on Falun Gong, and propaganda about the Chinese Communist Party’s political stance on the unification of Taiwan.

Cole, the researcher in Taiwan, writes, “It is difficult to find a ‘smoking gun’ on formal links between organizations like the Alliance … and the Chinese intelligence apparatus. However, there is ample anecdotal evidence to suggest at least some connections with the Chinese Communist Party’s United Front Work Department, the General Political Department, … and the Ministry of State Security,” listing the Communist Party’s various instruments used to penetrate and spy on other countries.

“Either they are feared,” Cole said, “or their deep connections within the Nationalist Party and Chinese Communist Party are making them ‘untouchables'” for the authorities.

Video captured on Aug. 5 shows a typical scene: Zhang Xiuye grabs a female Falun Gong practitioner by the arm, then punches her in the head, again and again. Later she begins tossing photographs of the founder and spiritual teacher of Falun Gong, Li Hongzhi, on the ground.

On yet another occasion—in a scene eerily reminiscent of the worst of the religious persecution against Falun Gong in China—she tapes photographs of Master Li to the ground, inviting pedestrians to step on them, while using a toilet plunger to strike the portrait.

Most of the participants in the Patriotism Association’s activities are not gainfully employed, nor educated on the finer points of etiquette. They are also often ready for a bit of rough and tumble, according to Chu, who has observed and interacted with them on a number of occasions over the last four years.

When not engaging in violence, the Patriotism Association may simply wave the red flag of the PRC in the faces of pedestrians and Falun Gong adherents, hold placards that slander Falun Gong, or pay others to do so, yell slogans like “Long live the Communist Party,” and sing propaganda songs like “There would be no ‘New China’ without the Communist Party,” all through their loud and crackly megaphones.

Falun Gong practitioners meditate outside the Taipei 101 building in Taiwan’s capital in October 2013. The group has been targeted by roughneck pro-Chinese Communist Party activists in the last few years. (Ke-Ren/Epoch Times)

Though the Patriotism Association, on the street and online, makes a point of supporting political unification between Taiwan and the People’s Republic of China, much of its recent energies seem to be directed against Falun Gong.

Falun Gong, a traditional Chinese spiritual practice, has an established body of practitioners in Taiwan numbering in the “hundreds of thousands,” according to an estimate by Chang Ching-Hsi, the chairman of the Taiwan Falun Dafa Association, which represents the practice there.

Well-known university professors, journalists, lawyers, and judges are among those that comprise the Falun Gong population in Taiwan, which cuts across all parts of society.

Though the Communist Party has for the last 15 years run a vast campaign of violent repression of the group in China, until recently it has mostly kept its hands off the Falun Gong population in Taiwan.

That began to change over the last few years—in Taiwan, especially as the influx of Chinese tourists began encountering adherents and picking up their materials that debunked the hate-filled propaganda against the practice spread by the authorities in the mainland.

In Hong Kong a similar group to the Patriotism Association—they call themselves the Youth Care Association—conducts similar activities directed toward an apparently similar end. They hurl abuse, strike with their flagpoles, and generally terrorize, harass, and attempt to suppress the Falun Gong presence wherever it appears in Hong Kong.

As in Taiwan, public contretemps have erupted between conscientious members of the public and the hooligans. An award-winning schoolteacher, Alpais Lam Wai-sze, became the unwanted center of attention in Hong Kong last year after she was caught on video cursing out Youth Care Association miscreants who were blocking a public thoroughfare and harassing nearby Falun Gong adherents.

Falun Gong practitioners meditate outside the Taipei 101 building in Taiwan’s capital in October 2013. The group has been targeted by roughneck pro-Chinese Communist Party activists in the last few years. (Ke-Ren/Epoch Times)

Response from people in Taiwan has been varied. Shirley Yeh, for example, after being assaulted last year, won’t be going back to Taipei 101 until they’re gone, “because I’m scared of them. I’m afraid that they’ll attack me again. In my heart, I’m even scared they’ll find where I live and do something,” she said in a telephone interview.

A number of lawmakers, in both the Nationalist Party and opposition Democratic Progressive Party camps, have questioned Taipei Mayor Hau Lung-pin on why he hasn’t acted decisively to put a stop to the Patriotic Association’s antics and violence.

Taipei City Councilor Hung Chien-yi and the People First Party’s Lin Kuo-cheng, also a councilor of Taipei, have spoken out.

Many Taiwanese civic groups are also incensed by what they see as the flagrant disregard by the Patriotic Association for Taiwan’s civic life.

“All kinds of groups go there now to stand off against them,” said Theresa Chu.

Members of the Citizen Autonomy Reaction Front, a pro-independence group in Taiwan, interviewed by New Tang Dynasty Television, said: “We came here after seeing the video of them beating Taiwanese people and Falun Gong practitioners. … Taiwan is a land of freedom, but we absolutely won’t tolerate such barbarism.”

Computer hackers have also made their feelings known. The Patriotism Association’s website was vandalized in August and made to read: “I am wrong. The Chinese Patriotism Alliance Association is the origin of all evil.”

Another note on the site said: “I’m sorry I’m so stupid. I’ve got nothing to do but stand outside Taipei 101. I should go back to China and eat …” The remark finished with a scatological reference.