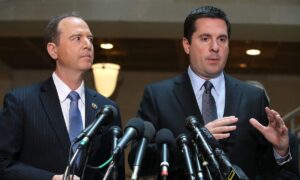 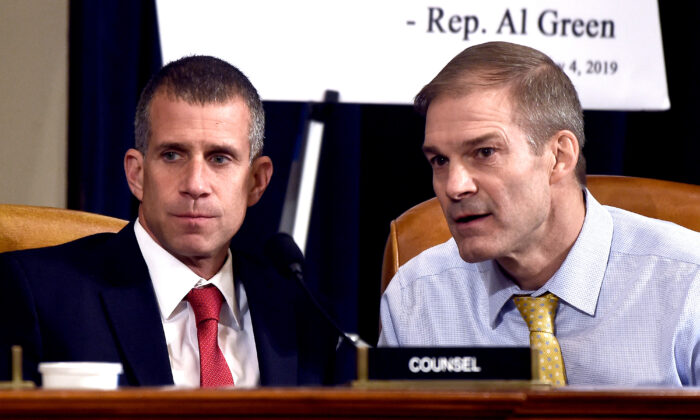 Republican lawmakers used the first public hearing of the impeachment inquiry into President Donald Trump on Nov. 13 to expose major gaps in the narrative crafted by Democrats and their media allies over the course of weeks of secret depositions.

Taylor testified that he had developed a “clear understanding” that the aid for Ukraine and the potential White House meeting between Trump and Zelensky were conditioned on Ukraine committing to pursue the investigations into Ukrainian energy giant Burisma, the Bidens, and Ukraine’s interference in the 2016 U.S. presidential election. But under questioning by Rep. Jim Jordan (R-Ohio), Taylor conceded that during his three meetings with Zelensky, the Ukrainian leader never linked the military aid to the opening of any investigations.

“So three face-to-face meetings, it doesn’t come up, no linkage whatsoever. President Zelensky doesn’t announce it before the aid is released on Sept. 11, yet you said you had a clear understanding that those two things were going to happen, the money was going to get released, but until there was an investigation and that in fact didn’t happen,” Jordan said. “So what I’m wondering is, where did you get this ‘clear understanding’?”

“We’ve got six people having four conversations in one sentence, and you just told me this is where you got your ‘clear understanding,’” Jordan said. “This all happens, by the way, in Warsaw, where Vice President Pence meets with President Zelensky and guess what—they didn’t talk about any linkage either.”

In addition to the three levels of hearsay, the concern Sondland raised with Yermak was based on a presumption that Sondland made about a potential link between the military aid and the investigations, according to a sworn statement that Sondland submitted as an addendum to his closed-door testimony (pdf).

In subsequent questioning, Rep. Michael Turner (R-Ohio) got Taylor to agree that the people who were the subject of the hearsay evidence he presented could be wrong.

The Democrats are working to determine whether Trump leveraged his official position for personal political gain when he requested, during a July 25 phone call with Zelensky, that the Ukraine president “look into” the Ukrainian business dealings of Hunter Biden, son of former Vice President Joe Biden, and a server tied to CrowdStrike, the cybersecurity firm that analyzed an alleged hack of the Democratic National Committee (DNC).

During the open hearing, Schiff alleged, without evidence, that Trump acted to benefit his 2020 reelection campaign by specifically targeting the Bidens. The California Democrat also dismissed the request about CrowdStrike as an unfounded conspiracy theory. Previous testimony from other witnesses suggests that Trump’s reference to DNC and Crowdstrike is tied to his broader concern about Ukraine’s interference in the 2016 U.S. presidential election.

Republicans put Schiff’s narrative on trial during the open hearing by demonstrating that Trump had good reason to ask for some investigation, beyond the rationale alleged by Schiff.

Both Taylor and Kent admitted that issues with corruption in Ukraine are pervasive. Kent told lawmakers that Burisma, the Ukrainian gas firm that paid Hunter Biden to serve on its board at the time his father was vice president, was the first company to be the subject of a joint investigation by U.S. and Ukrainian law enforcement. Under questioning for Republicans, Kent confirmed that he had concerns about Biden joining the Burisma board because of the appearance of a conflict of interest. Kent flagged the concern with the vice president’s office.

The House committee’s ranking Republican, Devin Nunes (R-Calif.), through a series of questions, outlined a wide-ranging campaign by Ukrainian officials and a DNC operative to undermine Trump and boost Hillary Clinton prior to the 2016 election. Nunes cited several pieces of evidence to support the claim, including an August 2016 op-ed by Ukrainian Ambassador to the U.S. Valeriy Chaly, in which Chaly criticized Trump and a July 2016 Facebook post in which Ukraine’s current Minister of Internal Affairs, Arsen Avakov, calls Trump a “dangerous misfit.”

“The Democrats downplay, ignore, or outright deny the many indications the Ukrainians actually did meddle in the election, a shocking about-face for people who, for three years, argued that foreign election meddling was an intolerable crime that threatened the heart of our Democracy,” Nunes said.

“While the brazen suddenness of this U-turn is jarring, this denial is the necessary part of their argument,” Nunes added. “After all, if there actually were indications of Ukraine election meddling and if foreign election meddling is a dire threat, then President Trump would have a perfectly good reason to want to find out what happened.”

An overarching theme running through Taylor’s narrative is that two channels existed on Ukraine policy, a regular one run by him and an irregular one run by then-Special Envoy to Ukraine Kurt Volker, Energy Secretary Rick Perry, Sondland, and Rudy Giuliani, Trump’s personal attorney.

Under questioning by the counsel for the Republicans, Taylor agreed that it was “perfectly acceptable” for Perry, a Senate-confirmed official with deep experience in international energy markets, to be working with Ukraine and that Volker was working in the best interest of the United States and had “unquestioned integrity.” Taylor noted that it was “a little unusual” for Sondland, the EU ambassador, to be working on Ukraine policy.

Rep. John Ratcliffe (R-Texas) questioned Taylor about Zelensky’s repeated public statements that there were no conditions, nor was there pressure, corruption, blackmail, or quid pro quo on the call with Trump. Ratcliffe cited official Ukrainian press releases, Reuters, and other media that have reported that Zelensky never linked military aid to Trump’s request.

“Unlike the first 45 minutes that we heard from the Democrats today, that’s not secondhand information, that’s not hearsay, that’s not what someone overheard Ambassador Sondland say. That was his direct testimony,” Ratcliffe said.

“Ambassador Taylor, do you have any evidence to assert that President Zelensky was lying to the world press when he said those things?” Ratcliffe asked.

“I have no reason to doubt what the president said in his press conference,” Taylor said.

Ratcliffe concluded by noting that the Democrats would have to call Zelensky a liar if they were to impeach Trump based on the current allegations.

The impeachment inquiry’s most egregious allegation is that Trump tried to pressure Ukraine to investigate Biden in order to benefit his 2020 reelection campaign. The allegation is one of several listed in the complaint filed by an anonymous whistleblower that triggered the impeachment inquiry. The complaint was forwarded to the Justice Department to determine if Trump’s request constituted a campaign finance violation; the Justice Department determined no further action was necessary.

In his request to Zelensky, Trump referenced the firing of Viktor Shokin, a top Ukrainian prosecutor, who was ousted after then-Vice President Biden threatened to withhold $1 billion in U.S. loan guarantees from Ukraine. At the time Biden lobbied for Shokin’s removal, his son served on the board of Burisma, the company under investigation by Shokin’s office.

Some officials, including Kent, say that Biden acted in line with U.S. policy, which viewed Shokin as a corrupt prosecutor. In a sworn statement, Shokin said he was fired due to pressure because he refused to drop the Burisma investigation.

A representative for Burisma used Hunter Biden’s name while lobbying the State Department to stop the corruption allegations against the company. Burisma’s overture came just weeks after Shokin’s investigators seized the property of Burisma’s owner, Mykola Zlochevsky. Hunter Biden stepped down from Burisma’s board in April of this year.

Early last year, the elder Biden bragged about forcing Shokin’s firing during a 2018 panel by the Council on Foreign Relations.

During a round of questioning by Rep. Chris Stewart (R-Utah), Taylor and Kent conceded, through their silence, that Biden’s move was unprecedented.

After Taylor agreed that corruption exists in every country in the world, Stewart asked, “So in these corrupt nations, in which there are probably hundreds of corrupt individuals, hundreds of corrupt government officials, can you give me an example any time where the vice president of the United States shows up and demands that a specific prosecutor be fired and gives them a six-hour time limit to do that? Are you aware of that happening in any other place?”

“I guess the answer is no,” Stewart said.