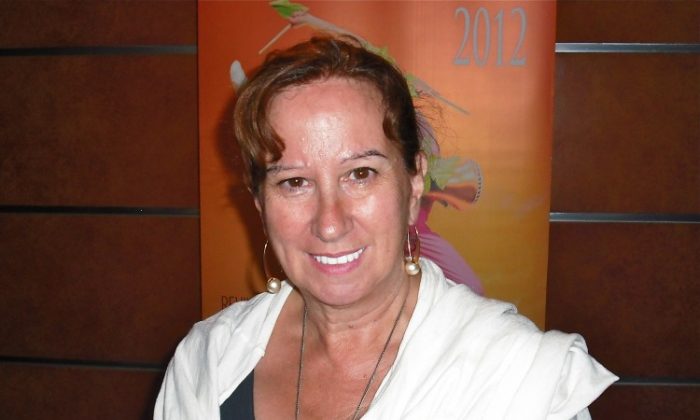 Building designer and Cronulla Rotary Club president, Philip Hutt, was among the crowded theatre wowed by the loveliness exuding from the dancers onstage. He was enjoying the portrayal and revival of China’s five millennia cultural heritage.

“The costumes are fantastic! The ladies with the silk sleeves, Sleeves of Silk,, I thoroughly recommend watching them, fantastic! The dancing is by far the best I’ve seen,” he said.

Mr. Hutt was referring to what is known in classical Chinese dance as “water sleeves,” which is used for some of its loveliest expressions. Acting as extensions of a dancer’s arms, these sleeves linger in the air long after a movement is finished, the program book says.

And as much as he admired the beauty of the dancers, that’s how much he enjoyed the piece How the Monkey King Came to Be. This dance is choreographed to match hi-tech animated backdrop scenes that interact between screen and stage.

“Growing up as a young boy I used to watch Monkey Magic, and I think watching the Monkey King was very impressive,” he said.

Monkey King was born out of a rock. He has magical powers that allow him to travel freely between Heaven and Earth. As Monkey King wreaks havoc in heaven, he finds himself in the palm of the Buddha.

“Fantastic … The dance and the synchronicity of the dance is absolutely phenomenal,” he said.

“It’s just beautiful and it’s so elegant. The costumes are fantastic and I love the little stories; every time one of the different segments are on there’s a little story,” she said.

She too especially enjoyed How the Monkey King Came to Be.

“I think, because I grew up with the story and I knew the story of the Monkey King so it was just lovely to see it come alive,” Ms. Moran said.