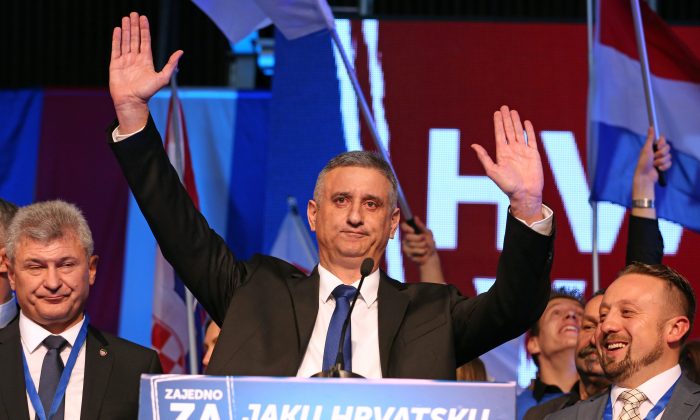 Leader of the conservative opposition Croatian Democratic Union party, Tomislav Karamarko (C), and supporters celebrate initial results of the general elections in Zagreb, on Nov. 8, 2015. Croatia's conservative opposition was leading the vote count late Nov. 8, 2015, after a general election dominated by concerns over the migrant crisis and a sluggish economy. (STR/AFP/Getty Images)
Europe

The state electoral commission said Sunday that with about 70 percent of the vote counted, the conservatives, led by former intelligence chief Tomislav Karamarko, won 61 seats in the 151-seat parliament, while Social Democrats, led by incumbent Prime Minister Zoran Milanovic, had 53.

The result means both blocs have failed to win an outright majority in Sunday’s vote and the forming of the new government will depend on several small parties that entered parliament. The kingmaker could be the third-placed party, Most, or Bridge, with a projected 19 seats.

“We have won,” Karamarko said. “The party which has won the most number of votes must lead Croatia in the future,” he added with his supporters chanting “Victory, Victory.”

However, Milanovic called on Most, the newly-formed group of citizens without clear political stands, to start talks on a new coalition.

“Croatia has decided for a change,” Milanovic said. “We cannot do it alone.”

The vote’s outcome could disrupt the flow of migrants crossing the small country if the conservatives form the government and return to power and carry out pledges to implement tough measures against the surge. Since September, Croatia has seen an influx of more than 330,000 people fleeing war and poverty and seeking a better life in wealthier EU states such as Germany.

The conservatives have criticized Milanovic’s government for allowing a free flow of migrants and have hinted they would build fences and deploy the army to the border to stop the flow.

“Our election campaign was very passionate. Unfortunately, it has been marked by the migrant crisis as well as by hate speech and hate mongering of the (conservative) backers,” Milanovic said as he cast his ballot.

Croatia, with a population of 4.2 million, has one of EU’s worst economies. It only recently emerged from a six-year recession, the public debt stands at nearly 90 percent of gross domestic product and unemployment is hovering around 16 percent, of which 43 percent is among young people.

Sunday’s vote represented a revival for Karamarko’s conservative Croatian Democratic Union party, which led Croatia during its war for independence from the Serb-led Yugoslavia in the 1990s and then dominated its political scene for years. Its popularity plummeted after a series of corruption trials against top officials.

The presidential election victory earlier this year of a conservative, Kolinda Grabar-Kitarovic, was a clear sign that Croatia is shifting to the right after the center-left bloc’s four-year rule.

Karamarko campaigned on patriotism and creating new jobs, while Milanovic promised economic revival and warned against allowing Croatia to return to its conservative past.