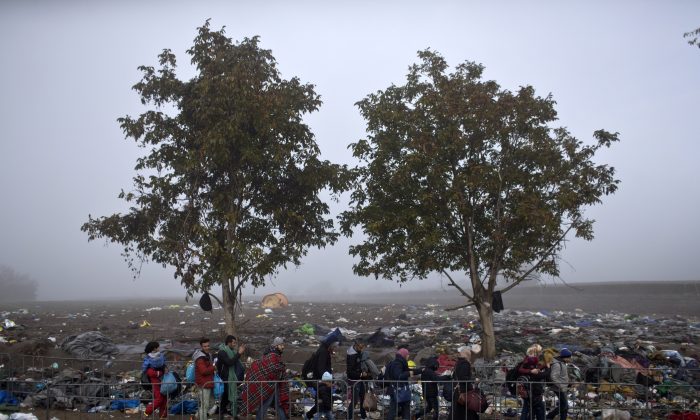 A group of people walks towards Serbia's border with Croatia in Berkasovo, Serbia, on Oct. 24, 2015. Thousands of migrants and refugees are still crossing from Serbia into Croatia and continuing their journey towards Western Europe. (AP Photo/Marko Drobnjakovic)
Europe

BREZICE, Slovenia—The latest news as asylum-seekers make their way across Europe by the tens of thousands, fleeing war or seeking a better life. All times local:

Croatia’s prime minister has criticized a draft agreement prepared for Sunday’s EU-backed summit on the migrant crisis as “unrealistic.”

Zoran Milanovic said Saturday the draft envisages that countries along the so-called Balkan corridor would not transfer migrants to a neighboring countries’ border without first getting agreement.

Milanovic said: “That is impossible, whoever wrote this does not understand how things work and must have just woken up from a months-long sleep.”

Milanovic says the only solution for the control of migrant influx lies at the border between Turkey and Greece, where migrants first enter EU. “Everything else is a waste of time,” he says.

Leaders of Austria, Bulgaria, Croatia, Germany, Greece, Hungary, Romania and Slovenia have been invited to the Brussels summit along with two non-members of the EU, Macedonia and Serbia.

Slovenian police say they have used pepper spray to break up a scuffle between migrants at a refugee camp near the border with Croatia.

Witnesses say several people have been slightly injured in the brawl Saturday morning at the Brezice camp, and were given medical treatment.

Novo Mesto police say that a quarrel between two groups of migrants escalated into a fight.

Tensions have been boiling at the Brezice camp where thousands are waiting to move on toward Western Europe. Tiny Slovenia complains it lacks capacity for tens of thousands surging through the country.

Slovenian police say some 13,000 people came into the country on Friday and early Saturday.

Austrian authorities say they’re expecting at least 6,000 more asylum-seekers to reach a registration camp in the town of Spielfeld on the border with Slovenia.

Police spokesman Fritz Grundnig told the dpa news agency Saturday some 3,000 were already in the camp as of Saturday morning and were being housed in heated tents.

The flow of buses to take the people on to Vienna to board trains for their final destinations has been slow and many have been waiting for days. Hundreds of taxis swarmed through the area to pick up those who could afford the 400 euro fare to the Austrian capital.

Austrian army spokesman Pierre Kugelweis told the AP some 1,000 troops, including interpreters, have been deployed around the country to help.

The city said in a statement Saturday that Berlin expects 1,000 people to arrive this weekend based upon the numbers coming across the border from Austria.

It says 90 other facilities are all full, so firefighters, soldiers, disaster-relief workers and volunteers are busily erecting 73 large tents inside a hangar at the famous former airport, which was closed in 2008.

Aid workers and medical personnel are also being brought in to help at the new facility, which should house all 1,000 people.

Since closed, Tempelhof’s hangars have been used for various events including gala balls, fashion shows and even hockey games.

German Chancellor Angela Merkel says it is important to try to quickly integrate a flood of newcomers into society, stressing the importance of jobs, education and learning the German language.

Merkel said in her weekly podcast Saturday that Germany had learned its lessons from the 1960s when a wave of migrants arrived as “guest workers.” It was thought they would eventually return home but instead many have remained for generations.

She says less-educated refugees should be given training to help get them jobs, and that children should be quickly put into schools.

Merkel is proposing a 600-hour integration course to help refugees learn the language and culture, which could begin even before asylum is officially granted.

An official in Cyprus says a “small number” from the 114 migrants whose two boats landed at a British air base earlier this week have claimed asylum.

Base spokeswoman Connie Pierce says RAF Akrotiri “is not a route through which people will be able to get to the U.K.”

Pierce said Saturday that base authorities are working with the Cyprus government to process the mostly Syrian, Lebanese and Palestinian nationals and handle all asylum claims.

She said a temporary facility is being set up on base territory to house the people if it’s deemed necessary to move them.

Britain fears that its two sovereign bases on Cyprus could be seen by traffickers as an easy back door to Britain.

Authorities say thousands more migrants arrived overnight in the locality of Berkasovo in western Serbia on the border with Croatia.

They’re part of the flood now trying to make to Western Europe via Croatia and Slovenia instead of Hungary, which has erected high, razor-wire fences along its borders with Serbia and Croatia.

Niklas Stoerup Agerup, a field protection officer with the U.N. refugee agency, said Saturday some 3,000 migrants arrived at the border with Croatia overnight.

But he says people are moving along on buses through the night. He says there’s been a “continuous outflow of people as well as an inflow.”

Mahmoad Al Haj was among those waiting.

Thousands of migrants are shouting ‘I need go’ as they wait in an overcrowded migrant center in Slovenia to move on toward Western Europe.

Tensions were building again Saturday at the Brezice camp near the border with Croatia where a fire broke out burning down several tents earlier this week.

Migrants at Brezice are waiting for transport further west to Austria. Thousands are packed behind metal barriers guarded by riot police and armored vehicles.

The migrant flow has slowed down in tiny Slovenia which has complained it lacks manpower and equipment to handle the influx of tens of thousands of people crossing through the country.

The so-called Balkan migrant route switched to Slovenia a week ago when Hungary closed its border with Croatia forcing the tide to move.

Amnesty International is warning of a humanitarian disaster unless countries on the Balkans migrant route come up with a plan at a summit this weekend on how to tackle the crisis.

The group’s branch in Slovenia said in a statement Saturday that migrants are still often forced to sleep outside on their way to Western Europe, and that conditions will become more severe as winter set in.

The group says Sunday’s summit in Brussels of several EU and Balkan nations must result in a solution.

Leaders “must not walk away from another meeting without a feasible plan on how to protect the needs and rights of the refugees,” the group insists.

Swedish police say an early-morning fire has destroyed a house intended to house refugees in Eskiltuna near Stockholm. Two people are reported missing.

Spokesman Paul Edenstrom says the whereabouts of a couple who were listed as living at the address is not known, but they were believed to be in the building when the fire started.

Edenstrom said the fire is being investigated as a case of arson.

In recent weeks, Sweden has seen a spate of arson attacks on asylum centers or buildings to be used as such as an influx of refugees has surged. Immigration officials estimate some 190,000 asylum-seekers will arrive this year, second only to Germany in Western Europe.