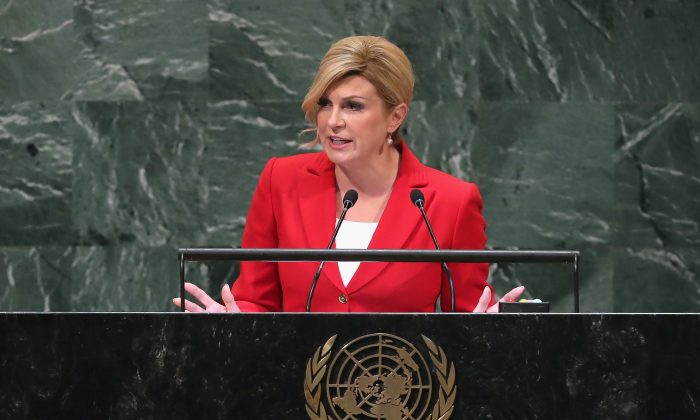 Croatia said that it will not sign the United Nations’ Global Compact for Migration. The country joins a growing number of countries that have not signed the agreement, including the United States, Hungary, and Austria.

In a statement regarding the Global Compact for Migration (GCM), Croatian President Kolinda Grabar-Kitarovic wrote: “Be assured I will not sign the ‘Marrakesh Agreement,'” Croatian journalist Velimir Bujanec reported on Oct. 31.

The GCM (pdf), set to be signed in Marrakesh, Morocco, on Dec. 11-12, is the first of its kind to set global standards and guidelines for countries to address migration.

On July 13, with the exception of the United States, all other U.N. member nations—of which there are 192—had approved the GCM. However, a growing number of countries have since decided not to sign the non-binding pact, including Hungary and Austria.

Croatia’s decision comes amid increasing tensions at its border in recent months, as thousands of illegal migrants try to cross into the country from Serbia, Bosnia, and Herzegovina. The migrants hail from northern Africa, the Middle East, or Asia.

The United States was the first to pull out of the compact in December 2017. Hungary withdrew from the agreement on June 18. Austria announced it would reject the migration compact on Oct. 31.

The migration compact came about following the adoption of the New York Declaration for Refugees and Migrants on Sept. 19, 2016, by 193 U.N. member states.

The Trump administration said that the pact, which had been recognized by the Obama administration, is inconsistent with national sovereignty.

“The United States supports international cooperation on migration issues, but it is the primary responsibility of sovereign states to help ensure that migration is safe, orderly, and legal,” the then-Secretary of State Rex W. Tillerson said in a statement on Dec. 3, 2017.

“We simply cannot in good faith support a process that could undermine the sovereign right of the United States to enforce our immigration laws and secure our borders,” he said.

Nikki Haley, U.S. ambassador to the U.N., said at the time, “We will decide how best to control our borders and who will be allowed to enter our country.”

Australia voiced similar concerns about the U.N. global migration deal in July, saying it wouldn’t sign the agreement “in its current form” as it was not in the nation’s interest, their immigration minister, Peter Dutton, said.

Dutton said at the time that Australia won’t “sign a deal that sacrifices anything in terms of our border protection policies.”

Recently on Oct. 31, the Austrian government said it wouldn’t sign the migration deal, citing, among other things, fears about a possible watering-down of the distinction between legal and illegal migration, the Epoch Times reported.

“Some of the contents go diametrically against our position,” Austrian Vice Chancellor Heinz-Christian Strache said on Oct. 31.

“Migration is not and cannot become a human right,” he added. “It cannot be that someone receives a right to migration because of the climate or poverty.”

“It’s not clearly interpreted and it could be abused. The United States has pulled out, Hungary too, now Austria, and Poland is debating it as well,” he said, according to the Irish Times.

“I don’t like the fact that it blurs the distinction between legal and illegal migration … I will propose to partners in the government that we should do the same as Austria and Hungary,” he added, ahead of cabinet talks to take place in the coming week.

‘An Encouragement to Migration’

When Hungary announced its withdrawal from the agreement in June, Hungary’s Minister of Foreign Affairs and Trade Péter Szijjártó said in a statement that the agreement is “totally at odds with the country’s security interests.”

“Hungary does not regard the goals and principles declared by the compact as valid guidelines with regard to itself. In addition, the document does not deal with the truly existing fundamental human rights of people who want nothing else than to be able to live in peace and security in their own homelands,” he said.

Szijjártó added that although the fundamental premise of the agreement is a “good and unavoidable phenomenon,” the document itself is “dangerous, extremist, biased, and an encouragement to migration.”

Tom Ozimek of The Epoch Times contributed to this article.