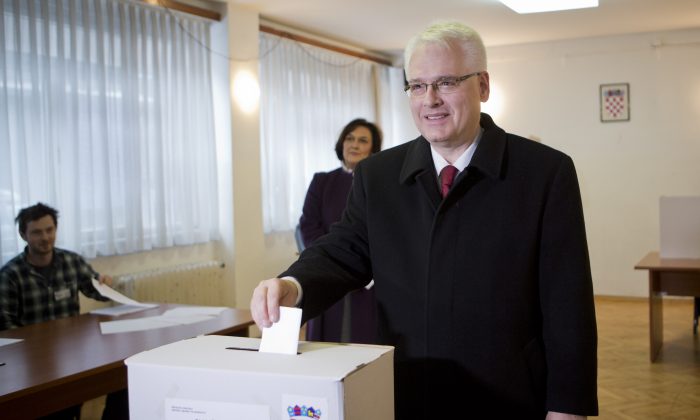 Croatia's president Ivo Josipovic cast his ballot at a polling station in Zagreb, Croatia, Sunday, Dec. 28, 2014. Croatia's economic woes hung over presidential elections Sunday in which a liberal incumbent faced pressure from a conservative challenger. The vote is seen as a test for the center-left government which has come under criticism for its failure to revive the economy more than one year after Croatia joined the EU. Croatia has one of the weakest economies in the bloc, with unemployment at nearly 20 percent and a six-year recession. Nearly 3.8 million voters can pick from four candidates for the largely ceremonial but influential post. (AP Photo/Darko Bandic)
Europe

Croatia Presidency to Be Decided in Runoff

ZAGREB, Croatia—The liberal incumbent and a conservative rival are heading for a showdown in a runoff presidential election in Croatia, according to the preliminary count of the Sunday poll, held amid severe economic woes in EU’s newest member.

Current President Ivo Josipovic, who is backed by the center-left government, held a slight lead with 38.5 percent over opposition candidate Kolinda Grabar-Kitarevic at around 37.1 percent, early results released by the election authorities showed. Two other candidates were far behind.

Since no one took more than half of the votes, a runoff will be held in two weeks.

“We have won the first round, and we will win in the second,” Josipovic said.

Grabar-Kitarevic told supporters that “Croatia has shown it wants change. This is just the beginning!”

The presidency in Croatia is a largely ceremonial post, but the vote is seen as a test for the center-left government which faces criticism over an ailing economy more than one year after the country joined the European Union.

Prime Minister Zoran Milanovic said Josipovic “was carrying a heavy burden of the government, which is doing a tough job in a tough time.”

Croatia has one of the weakest economies in the bloc, with unemployment at nearly 20 percent and a six-year recession.

Voters, who braved a blizzard to cast ballots early Sunday, said issues such as unemployment and the fight against corruption would be decisive.

Nearly 3.8 million voters were eligible and turnout was around 36 percent.

Josipovic, a soft-spoken composer and law expert, is bidding for a second term at the post that is considered influential although the government largely runs the country.

Grabar-Kitarovic is a former foreign minister and an ex-assistant to the NATO secretary general. A strong showing for Grabar-Kitarovic would give her Croatian Democratic Union a major boost ahead of parliamentary elections due in about a year.

From The Associated Press. Almir Alic contributed to this report.