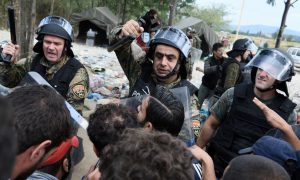 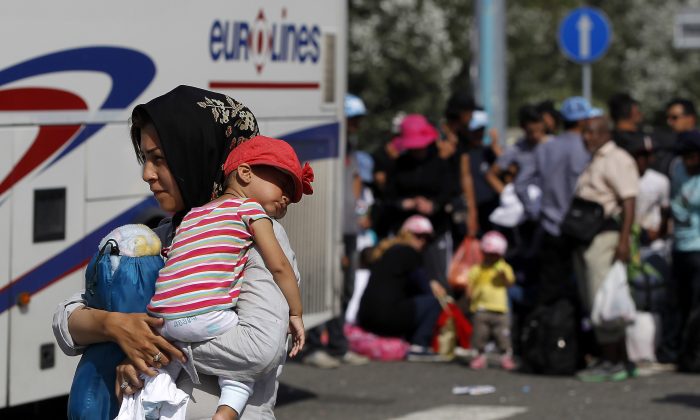 Migrants board a bus which will take them to Croatia at the Horgos border crossing with Hungary on September 17, 2015 in Horgos, Serbia. (Srdjan Stevanovic/Getty Images)
Europe

Croatia Is the Latest Migrant Hotspot After Hungarian Clashes

TOVARNIK, Croatia—Thousands of people are pouring into Croatia, turning that nation into the latest hotspot in the 1,000-mile plus exodus toward Western Europe after Hungary used tear gas, pepper spray and water cannons to keep migrants out of its territory.

After bus trips through Serbia, the migrants crossed fields on foot to enter Croatia, where dozens of police directed them to trains and buses heading to refugee centers in Zagreb and elsewhere. Authorities earlier had warned them to avoid walking in areas along the Serbian border that are still being demined from the country’s 1991-95 war.

Croatian Interior Minister Ranko Ostojic said the country has the situation under control but warned that “if huge waves start coming through Serbia, we must consider different moves.”

Croatia represents a longer and more arduous route into Europe for the asylum-seekers from Syria and elsewhere fleeing violence in their homelands. But they have little choice after Hungary sealed off its southern border with Serbia on Tuesday and began arresting anyone caught trying to enter the country illegally.

The migrants are unlikely to stay long in Croatia. Most plan to travel on, passing through Slovenia and then Austria en route to their final destination, which for most is Germany or the Scandinavian countries. Croatian Foreign Minister Vesna Pusic said the country “cannot force anyone to stay.”

Both Slovenia and Austria reinstated border checkups in anticipation of the refugee wave — and Hungary warned that it would consider also building a wall on its border with Croatia.

Clashes between migrants and Hungarian riot police broke out Wednesday afternoon after people frustrated at being blocked from the country pushed open a gate at the border with Serbia. Baton-wielding police responded with tear gas and water cannons, and migrants threw rocks and other objects at the police. Dozens were injured.

Syrian Refugees Seek New Passports as a Ticket to Europe

On Thursday, the European Union’s migration commissioner, Dimitris Avramopoulos, urged Hungary to work with the bloc to alleviate the continent’s migration crisis and declared that walls and violence are no solution.

“The majority of people arriving in Europe are Syrians,” Avramopoulos said at a news conference alongside Hungarian Foreign Minister Peter Szijjarto in Budapest. “They are people in genuine need of our protection. There is no wall you would not climb, no sea you wouldn’t cross if you are fleeing violence and terror. I believe we have a moral duty (to) offer them protection.”

Hungary, in contrast, has been insisting that most of the people who have entered are economic migrants seeking better jobs. Prime Minister Viktor Orban has also said by keeping out Muslims, Hungarian police are defending “Europe’s Christian culture.”

Avramopouls countered that he considered it a “Christian duty” to handle the migration crisis with compassion.

Overnight, Hungarian authorities positioned barbed wire and a new gate at the border where the clashes occurred near the Serbian village of Horgos.

Hundreds of migrants remained at the two Horgos border crossings on Thursday, but their numbers dwindled as many headed toward the Croatian border. Serbian state TV said 70 buses transported people overnight to the border with Croatia.

Some refused to leave.

“We will stay here until they let us through,” said Sami Bustani from Homs, Syria, whose large family, including two small children, sat on the ground eating only bread. “Even if we have to die here, we are not going to Croatia, Slovenia. We want to go to Germany.”

In Paris, French authorities evacuated more than 500 Syrian and other migrants from tent camps and moved them into special housing as the country steps up its efforts to deal with Europe’s migrant wave.

Social workers and aid groups woke the migrants before dawn, and they gathered their belongings calmly, watched over by police. The operations took place at a large camp near the Gare d’Austerlitz train station in southeastern Paris, and another in the 18th arrondissement in northern Paris.