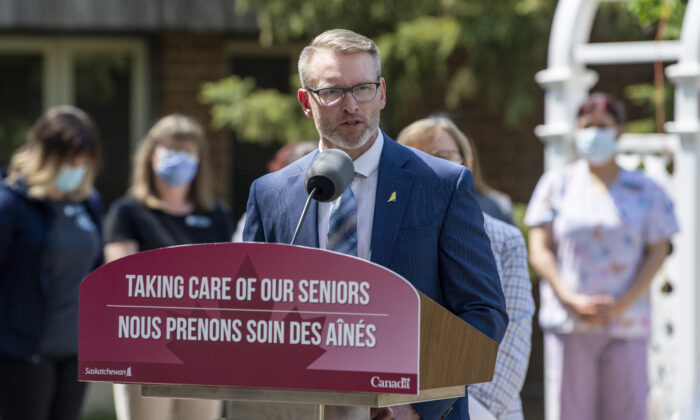 Saskatchewan Minister of Mental Health and Addictions, Seniors, and Rural and Remote Health Everett Hindley speaks at a joint media event with the federal government at St. Ann’s Senior Citizens’ Village in Saskatoon on May 25, 2022. (The Canadian Press/Liam Richards)
Canada

SASKATOON—Until recently, if you dialed the 811 health line in Saskatchewan looking for help with everything from COVID-19 to mental health and addictions, one of the options was contacting the medical assistance in dying (MAID) program.

“Press 5 if you wish to leave a message with the Medical Assistance in Dying Program,” said the recorded message.

That did not sit well with Peoples Party of Canada Leader Maxime Bernier, who tweeted about it in late August.

“They’re making it as quick and easy as possible. It’s a death cult,” Bernier wrote.

In a telephone interview with The Epoch Times, Bernier said he is pleased the province has dropped the option from the health line.

“Promoting actively the fact that you can have assisted suicide when you’re calling 811—and 811 is for people who are looking for help, emergency help—it’s unethical,” he said.

The provincial government sent a statement to The Epoch Times, explaining the decision.

“Healthline 811 provides a 24/7 call-in service for people experiencing mental health issues,” said Everett Hindley, minister for addictions and mental health in Saskatchewan. “It does not make sense to greet people who are seeking help with mental health issues with a message that could potentially imply that suicide is an option.”

Hindley said his office directed the Saskatchewan Health Authority to remove the message from the 811 service.

“This issue was originally raised with me by a mental health and suicide prevention advocate for whom suicide is a deeply personal issue.”

Bernier is not the only one applauding the news. Saskatchewan Sen. Denise Batters had contacted the provincial government about the 811 message. After it was dropped, she said on Twitter, “Thank you, Minister @everetthindley. The #Sask 811 ‘Health Line’ should promote suicide prevention, not suicide facilitation.”

Not everyone was applauding. The group Dying With Dignity said in an email to The Epoch Times: “It is important that systems such as Saskatchewan’s 811 health information services prioritize the needs of callers who are in crisis, while also providing uncomplicated access to health care information such as the regional MAID coordination services to those who are seeking it.”

The MAID information is available on the Government of Saskatchewan website.

For Bernier, the episode raises a bigger issue: the state of Canada’s euthanasia law. He says he voted for the original law when he was an MP in 2017, but the expansion of the legislation adopted last year goes too far. Besides people facing the end of life, MAID can now be offered to people who face unbearable mental or physical suffering from a disease or disability.

“It’s too easy for Canadians to have euthanasia,” he said. “That is why I said in my tweet we are promoting death, and we must promote life.”

Last month, the Conservatives asked for an investigation after reports emerged that a Veteran Affairs worker recommended MAID to a veteran seeking treatment for his injuries.

The federal government insists the legislation has “strong safeguards.”

In 2023, MAID will be expanded to accommodate people suffering solely from mental illness.