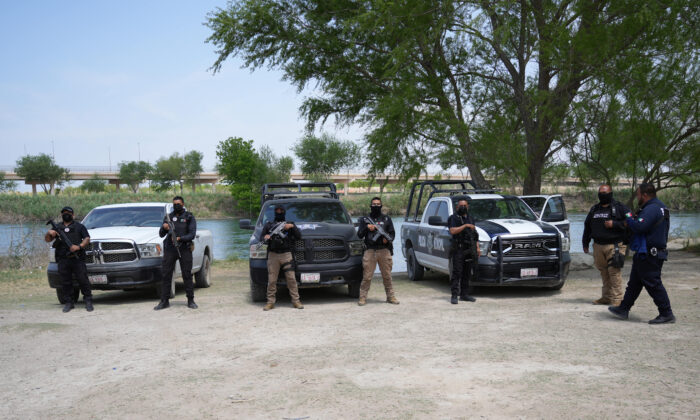 State and local Mexican police prepare to take photos for social media to show the area is safe for tourists during Easter, by the Rio Grande border with Texas, in Acuna, Mexico, on April 15, 2022. (Charlotte Cuthbertson/The Epoch Times)
Immigration & Border Security

Border Patrol Union chief says the Mexico side won't abide by the agreements: 'It's not going to be lasting—it never is’
By Charlotte Cuthbertson

ACUNA, Mexico—April 15 was quiet in Acuña, Mexico, which sits across the river from the Texas city of Del Rio—a hot spot for illegal immigration.

A day earlier, Texas Gov. Greg Abbott inked a border security agreement with his counterpart in the Mexican state of Coahuila, in which Acuña sits. The deal included “enhanced border security enforcement measures” along the Rio Grande.

In Acuña, The Epoch Times saw state and local police pull up to the Rio Grande and take photos of themselves for social media. They said they want to show tourists that it’s safe in Acuña during the Easter holiday and confirmed they haven’t been conducting extra river patrols since the agreement was signed.

Local immigration agents said “everything is normal,” when asked if they had been given any new instructions over the past week.

The agreements signed between Abbott and his counterparts in four bordering Mexican states have commercial trucks moving smoothly again through most ports of entry again, but critics say the border security part won’t last long.

The three Mexican states have promised to patrol the Rio Grande and curb illegal immigration into Texas, as well as conduct safety checks on the commercial trucks preparing to enter Texas.

“They’ll show a good faith effort, but it’s not going to be lasting—it never is,” Brandon Judd, president of the Border Patrol Union, told The Epoch Times.

“There’s just too much corruption. The cartels are too embedded in the governments, the corruption is very widespread down there. But at least Governor Abbott was able to force their hand.”

Over the previous two nights, Border Patrol agents apprehended 235 illegal immigrants who had crossed the river into the Eagle Pass area from the Mexican city of Piedras Negras, Coahuila state.

Among the first group were 16 illegal aliens from Kyrgyzstan, seven from Kazakhstan, and a Russian, according to Customs and Border Protection (CBP), which is responsible for border clearance into the United States.

Texas had signed agreements with three of the four Mexican states: Chihuahua, Coahuila, and Nuevo León, before an agreement with Tamaulipas, the furthest eastern state, was announced on April 15.

Abbott, a Republican, signed the first agreement with the governor of Nuevo León on April 13. That state shares just 8.6 miles of border with Texas, but Abbott immediately unblocked the ports in Laredo that had been clogged by Texas state police inspections close to the ports of entry.

The next two agreements were signed the following day—with Chihuahua (unclogging El Paso) and Coahuila (across from Del Rio and Eagle Pass, where no slowdowns were recorded).

The only reason the Mexican governors are signing the deals is because trade is being slowed down, Judd said.

“They don’t do anything to stop the cartels, they could have done this before,” he said.

But, he also said, ultimately the Biden administration has failed in border security.

On April 6, the Texas Department of Public Safety (DPS) was directed by Abbott to begin enhanced safety inspections on commercial vehicles entering Texas from Mexico.

Almost immediately, the commercial ports of entry became jammed and commerce dropped by around 60 percent in some areas. In the Rio Grande Valley, the Pharr port of entry closed entirely after protestors blocked it on the Mexican side, according to CBP, which issued its own statement on April 12 calling the inspections “unnecessary.”

“These inspections revealed that about 25 percent of the vehicles crossing into Texas were unsafe for Texas roads and were removed from service,” Abbott said.

“At the same time, Texas has been overrun with a record number of illegal immigrants crossing from Mexico into Texas, with the assistance of cartels.”

María Eugenia Campos Galván, governor of Chihuahua state, wrote in a memo to Abbott that she shares his concerns.

“I am concerned about the same interests that the Texas government is worried about: drug trafficking, people smuggling, money laundering, and most of all migration,” Campos’s April 13 memo states.

Campos said she intends to relocate the state’s public safety headquarters from Chihuahua City to Juarez, which sits directly across the border from El Paso.

The memorandum of understanding between Texas and Chihuahua sets forth that the two states will “work cooperatively to stop the flow of migrants from over 100 countries who illegally enter Texas through Chihuahua—including providing resources to respond to hot spot areas as identified by the Texas DPS.”

It also says the two states will “work cooperatively to reduce the cartels’ human trafficking and smuggling of deadly fentanyl and other drugs across and between ports of entry.”

The deal with Coahuila was similar.

“Until President [Joe] Biden decides to fulfill his constitutional duty to secure the border, we will continue to do whatever it takes to protect the safety and security of all Texans,” Abbott said in an April 15 statement.

In the first three months of 2022, agents apprehended more than 318,000 illegal immigrants entering the state of Texas from Mexico, according to CBP data. Tens of thousands more evaded capture.

Todd Bensman, national security fellow at the Center for Immigration Studies, said the whole idea of forcing the agreements through jamming up the commerce routes “is really quite brilliant.”

But, he said, “the devil is in the details. All of it’s just too vague.”

“The only real measure that is going to matter is if they [Mexico] physically pick up migrants and drive them to Guatemala. That’s it. Nothing else matters.”

The cartels control the Mexican side of the border, and so the governors are walking a fine line, Bensman said.

“They’re put in between a rock and a hard place between doing what Abbott wants and doing what they have to do to not get killed.

“Especially the Tamaulipas agreement. Because you’ve got cartels there making just billions of dollars—most of the money is being made there.”

Tamaulipas sits across from the Rio Grande Valley, which has long been the busiest sector for both illegal immigration and drug smuggling.