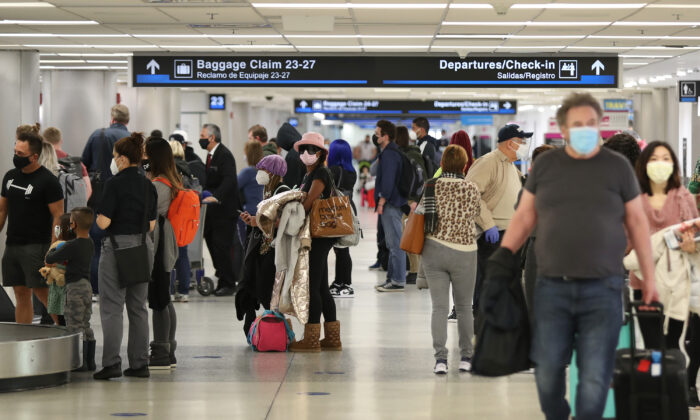 People gather their luggage after arriving at Miami International Airport on a plane from New York, in Miami, on Feb. 1, 2021. (Joe Raedle/Getty Images)
Executive Branch

The Biden administration said Wednesday that it would extend the federal mask mandate for planes, airports, and trains to May 3.

The Biden administration had initially extended the mandate to April 18 before announcing this additional extension.

Critics quickly pointed out the U.S Centers for Disease Control and Prevention is lifting Title 42 enforcement next month. Title 42 is a Trump-era immigration policy that allowed border agents to expel immigrants at the border to help prevent the spread of COVID-19 in the United States.

“And the POLITICAL science continues,” Rep. Tom Tiffany (R-Wis.), wrote on Twitter. “The Biden administration is planning to extend the mask mandate on planes, but they are lifting pandemic restrictions on illegal aliens. Will they ever stop putting the American people LAST?”

That message quickly became a talking point for Republicans Wednesday.

The Biden administration has taken fire for extending the mandate since nearly all other mask mandates around the country have been lifted.

“Our industry has leaned into science at every turn. At the outset, we voluntarily implemented policies and procedures—mandating face coverings; requiring passenger health acknowledgements and contact tracing information; and enhancing cleaning protocols—to form a multi-layered approach to mitigate risk and prioritize the wellbeing of passengers and employees,” the letter said. “However, much has changed since these measures were imposed and they no longer make sense in the current public health context.”