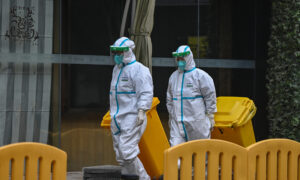 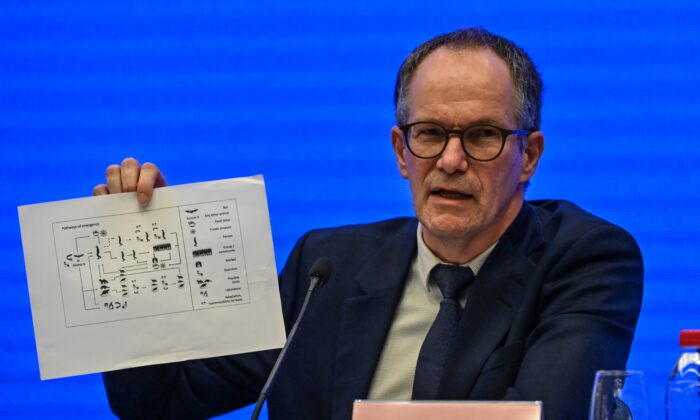 Peter Ben Embarek speaks during a press conference to wrap up a visit by an international team of experts from the World Health Organization (WHO) in the city of Wuhan, in China's Hubei province on Feb. 9, 2021. (Hector Retamal/AFP via Getty Images)
cover-up

A report from scientists assembled by the World Health Organization (WHO) and China into the origins of the pandemic is drawing criticism challenging the independence of its findings.

The report, released on March 30, left unresolved the question of how the CCP (Chinese Communist Party) virus (which causes the COVID-19 disease) entered the population but concluded the possibility of it being leaked from a lab as “extremely unlikely.

The long-awaited report was put together by a team of Chinese and foreign experts, based on their findings from an early February two-week fact-finding mission in central China’s Wuhan.

The report found the “likely to very likely” scenario was that the virus was transmitted to humans from another animal that was infected by bats. The possibility that it was directly transmitted from bats to humans was determined to be a “possible-to-likely” pathway.

It further found that contaminated “cold-chain” food products being the source of the virus was “possible” but not likely.

The Chinese regime started making unsubstantiated claims that the initial outbreak in Wuhan might have “originated from imported frozen food” in June last year, when it suspected European salmon could be contaminated with the virus.

“There is currently no evidence that people can catch COVID-19 from food or food packaging,” the WHO says on its website.

One of the team’s investigators has already said China refused to give raw data on early COVID-19 cases to the WHO-led team, potentially complicating efforts to understand how the global pandemic began.

“In my discussions with the team, they expressed the difficulties they encountered in accessing raw data,” WHO Director-General Tedros Adhanom Ghebreyesus said on Tuesday. “I expect future collaborative studies to include more timely and comprehensive data sharing.”

Ghebreyesus also called for further studies to build upon the report’s findings, saying that “all hypotheses remain on the table.”

“We have not yet found the source of the virus, and we must continue to follow the science and leave no stone unturned as we do,” Ghebreyesus said.

Since the report’s findings were leaked on Monday, it has since been heavily criticized by several U.S. lawmakers for being biased, including Michael McCaul (R-Texas), the lead Republican on the House Foreign Affairs Committee.

“The WHO should never have allowed the Chinese Communist Party to have such a heavy hand in drafting this report,” said McCaul in a statement ahead of the expected release of the report.

He added: “A report censored by the CCP is worse than no report at all because it allows the CCP to continue to spread misinformation about the virus and cover up the role they played in allowing it to spread.”

House Minority Whip Steve Scalise (R-La.) took to Twitter to say that the report was a joke, as the WHO “is covering for China.”

As a result, Scalise stated that it did not come as a surprise that the WHO report “exempts the Wuhan lab.”

The lab, the Wuhan Institute of Virology, has long been speculated that it could be the source of the pandemic through an accidental leak. Researchers at the lab have conducted extensive research on deadly bat viruses.

A fact sheet released by the U.S. State Department in late January stated that it “had reason to believe” several researchers at the institute fell ill with symptoms consistent with both COVID-19 and common seasonal illnesses in the autumn of 2019. A senior researcher at the institute previously said in July 2020 there was “zero infection” among lab staff and students.

The WHO report also said that it was inconclusive what role the Wuhan-located Huanan Seafood Market—which Beijing claims was ground zero for the outbreak—may have contributed to the spread of the virus.

Jamie Metzl, an Atlantic Council senior fellow who is also a WHO adviser, told Fox News on Tuesday that the findings of the report would have been a result of a “compromise” between the foreign scientists and the Chinese regime.

Metzl challenged the report’s finding dismissal of the lab leak theory as “extremely unlikely” saying “there’s a lot of evidence that suggests … that that is a very, very real possibility.”

He called for “full and credible investigation” into the origins of the CCP Virus.

There have been a lot of controversies prior to the release of the WHO report. Some of the team members who traveled to Wuhan earlier this year have been found to have relationships with the CCP, raising conflict of interest issues.