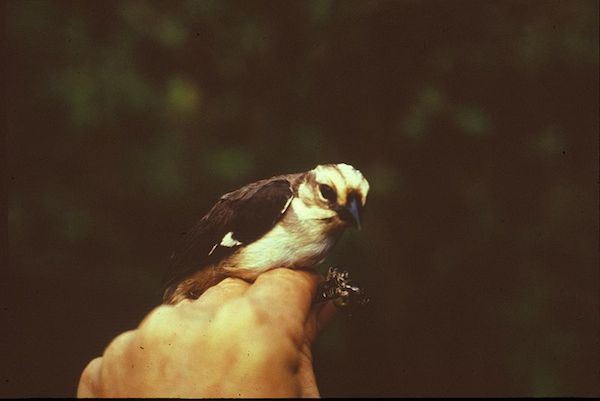 A pale-headed brush-finch (Altapetes pallidiceps)., one of the most endangered birds in the world.
News

Critically Endangered Bird Gets New Addition to its Reserve

An unassuming brown bird, tiny both in body and population size, hovers on the edge of extinction as much of its habitat has been cleared for agriculture and its nests are parasitized by cowbirds. In response, conservation organizations created a reserve expressly for the species’ preservation in the late 1990s; now that reserve is being expanded to try to push one of the world’s most endangered bird species farther back from the precipice.

The pale-headed brush-finch (Altapetes pallidiceps) disappeared for 30 years. But intensive surveys in 1998 turned up a few breeding pairs in southern Ecuador’s Yunguilla Valley, initiating a race to save those that remained. The American Bird Conservancy (ABC), in collaboration with Fundación Jocotoco, an Ecuadorian conservation organization, worked to establish the Yunguilla Reserve to protect the brush-finch’s habitat – which totals just half a square mile in size (one square kilometer).

Creation of the reserve allowed conservationists to better fend off human encroachment and manage habitat. The Yungilla Valley is particularly affected by agriculture, with natural vegetation felled to make room for crops and pasture, according to ABC. Scientists also blame another bird species, the shiny cowbird, for taking a toll on brush-finches. The cowbird is a brood parasite, laying its eggs in other birds’ nests. Baby cowbirds grow larger and faster than the nesting birds’ real offspring, outcompeting them for food the parents bring back. Conservationists both eradicated cowbirds in Yunguilla Reserve, and banned agricultural activities.

The efforts were a success. From just a handful of birds in the late 1990s, the known population has grown to between 200 and 250 individuals as of 2009. However, the IUCN still lists it as Critically Endangered.

“Jocotoco’s effort to save the Pale-headed Brush-finch is a wonderful example of how successful wildlife conservation can be achieved with expert knowledge and dedication,” said Christine Hodgdon, International Conservation Manager for Rainforest Trust. “Rainforest Trust is excited to continue supporting this invaluable project as it continues to expand and develop.”

Now, the problem seems to be space. A study conducted in 2009 found that the reserve may be at its brush-finch saturation point, meaning there may not be enough resources to allow the population to keep growing. Also, with all the world’s pale-headed brush-finches living in one small area, the species is very vulnerable to external threats. According to ABC, the reserve and its birds already been affected by fires that spread from neighboring agricultural land.

In response, ABC, Fundación Jocotoco, and Rainforest Trust recently purchased 104 acres of land to provide more potential habitat for the brush finches. The new purchase will act as a “satellite area” two miles from the reserve proper.

To conservationists, this may not just be a success story for the pale-headed brush-finch, but a possible protection strategy for other highly threatened, localized species around the world.

“ABC is particularly invested in this species, having financed the expedition that rediscovered the bird in addition to providing early support to build the reserve,” said Dr. George Fenwick, President of ABC. “This species is of global significance given that the entire remaining population persists in one location. This project demonstrates that protection of small populations restricted to single remaining sites can be an effective way to halt species extinction. With the addition of this new habitat, we expect the continued improvement of this species’ conservation status and prospects for its long-term survival,” he added.