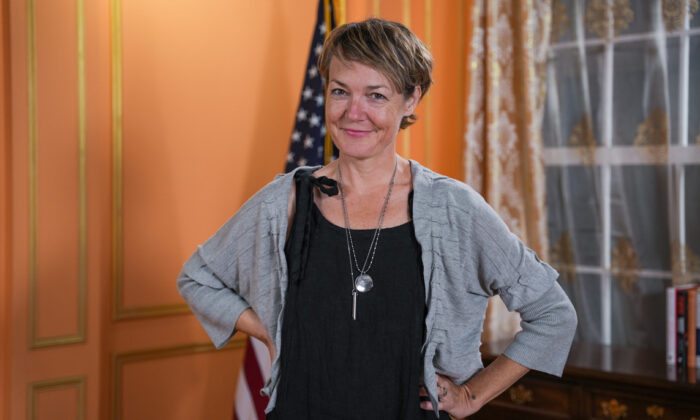 “When it was my turn, I said, ‘I’m not comfortable discussing my race here,'” whistleblower Jodi Shaw said. “The facilitator said, ‘Any white person who displays discomfort or distress when asked to discuss their race is not actually feeling distress. What they’re exhibiting is a power play, and that is white fragility.’”

In a recent episode of EpochTV’s “American Thought Leaders,” host Jan Jekielek sits down with Jodi Shaw, who has become an influential figure in the growing movement opposing training based on critical race theory, in academia and beyond. She made waves when she started speaking out in 2019 about the increasing illiberalism she saw at her then-employer and alma mater, Smith College, in Northampton, Massachusetts.

Jan Jekielek: Congratulations on being named a Hero of Intellectual Freedom, an honor awarded to you by the American Council of Trustees and Alumni.

Mr. Jekielek: You did your undergraduate studies at Smith College. Why don’t you start there and bring us up to the present?

Ms. Shaw: I graduated with my [Bachelor of Arts] in anthropology in 1993. I loved Smith. After graduation, I spent most of my time in Brooklyn. I was a musician living hand to mouth, but I was happy doing something I loved.

After I got married and had children, I became a librarian. Then my marriage ended. It’s tough living in the city with children if you don’t have a lot of money, so I was excited to get a job at Smith as a temporary librarian. I noticed there were a lot of discussions about whiteness and white privilege and systemic racism. I hadn’t been in academia for a long time, so these discussions were pretty foreign to me.

During this first year, I was tasked with giving an orientation to 600 incoming first-year students. I was told to do something wild and crazy. I pitched this idea of rapping, and it was accepted.

I was working on this rap over that summer of 2018 when a black student accused a white custodian of racism. The student made a Facebook post about it, and it went viral.

Smith immediately apologized to the student, announcing they were going to fight systemic racism with mandatory anti-bias trainings for employees. They did this before they even began an investigation into the incident. Less than a week before my presentation, my supervisor told me, “You can’t do the rap.” I asked, “Why not?” He pretty much said, “Because you’re white. Rap by white staff can be seen as culturally insensitive.”

I asked him, “If I was a person of color, could I do it?” And he said, “Yes.” So there was no rap. Even though I was up for a full-time position, I ended up leaving the library and taking a job in the residence life department. I took a big pay cut, but I thought I could avoid all this discussion about race and wouldn’t have to talk about my white privilege and my white fragility. Boy, was I wrong.

I didn’t know this, but in general, residence life departments are staffed by people with their master’s degrees in education, which is now saturated with social justice ideology. This is part of their job, to teach social justice to students.

It was made clear to me early on that I was going to have to talk about my fixed characteristics, like race and gender. That’s when I really started questioning this ideology. It’s hard when everyone around you is saying one thing, and you’re having this feeling that something isn’t right. So I tried to validate that feeling and find out why I was having it.

In the fall of 2019, I was mandated to attend a professional development training where we would discuss race. You’re not supposed to ask about race at a job interview, so I wondered why was I asked to do it as a continued condition of my employment.

I told my supervisor I wasn’t comfortable discussing my race at work, and she said, “Just say that in the workshop.” So we went around the room, and when it was my turn, I said, “I’m not comfortable discussing my race here.” The hired facilitator said: “Any white person who displays discomfort or distress when asked to discuss their race is not actually feeling distress. What they’re exhibiting is a power play, and that is white fragility.”

It felt like my heart stopped. I never dreamed that would be the response. I was singled out for my skin color, and I felt ashamed. That was when I decided I had to say something. I talked to my supervisors. I filed a lengthy internal complaint. I was passed off among administrators, and the investigation was delayed and delayed.

While this investigation was ongoing, I was informed that I would have to start going to discussions about racial justice at Smith. I thought, “If I’m not going to say anything, will I be construed as racist?” It was really stressful.

I don’t have a Ph.D. I’m not a faculty member. I’m a staff member. So I thought: “What can I do to get Smith to respond? How can I get them to pay attention to what I see is a real problem here, and not just for me, but for all the staff?” So I made a YouTube video with no idea what would happen.

In the video, I asked Smith College to stop reducing my personhood to a racial category, to stop telling me what I must think and feel about myself. I was watching television with my kids and checked my phone and saw the video had gotten 10,000 views. That’s when I knew, “They’re probably going to pay attention now.” And they did.

Mr. Jekielek: What happened next?

Ms. Shaw: The president released a letter on the website. She characterized the video as a critique of our social justice initiatives. It wasn’t a critique of the initiatives. It was very specific about things they were asking me to do. She didn’t address that. At the end of her letter, after she mentioned all this stuff about the video, she basically said, we stand by our initiatives and with students of color. That was condescending to any student who’s not white who watched my video. She implied they can’t handle somebody talking honestly in a polite, respectful way. I think that’s disempowering.

So I made a video in response to her letter. In it I said, “I’m going to create this as a dialogue, because I haven’t had one yet.” Then she sent a letter back. And there was retaliation. I was forwarding emails from my work account to my private account about my complaint, because this was documentation. For this, they put me under investigation, saying I’d compromised college information.

Then they said, “We’d like to resolve this amicably.” At that point, I asked them to apologize to the Smith staff and stop the programming, and they refused. I remember agonizing in front of my wood stove in the middle of winter thinking, “I could take a settlement and be OK.”

Mr. Jekielek: But there would be strings attached.

Ms. Shaw: Correct. Basically, I couldn’t talk about Smith anymore. In the end, I decided I would regret taking a settlement. I made a video about this decision, about freedom versus comfort. I thought: “I have to choose freedom. I just can’t give up my freedom.” Finally, I left.

Mr. Jekielek: How is your family?

Ms. Shaw: Thanks for asking. It’s been hard on my kids, but I comfort myself knowing they can take strength because their mother didn’t back down. I don’t want them to inhabit a future in which they’re told they’re bad because of their skin color or gender.

Mr. Jekielek: Have people reached out to you who have made difficult decisions like you did?

Ms. Shaw: Yes. And that’s very gratifying to me. I just had somebody write to me last night. I had talked to her on the phone about a year ago. She was in a similar terrible situation and has now filed a complaint with her state office of civil rights. She has gone from talking to me to filing a public complaint.

Something I would tell people is to find one other person. You need to find another person, preferably in the same environment as your job or school, just one other person. Once you start talking to each other, that one person can have such an impact.

Mr. Jekielek: In your acceptance speech, you make this distinction between stories that are ours and stories that come from outside, and how these stories impact our emotions. Woke ideology demands that its story be accepted. Either you do it volitionally, or it will be done against your will.

Ms. Shaw: If you don’t participate, then woke ideology says you are wrong.

People in woke ideology tell us that reverse discrimination doesn’t exist. But racism is an adverse action taken because of your skin color. That’s racism—across the board.