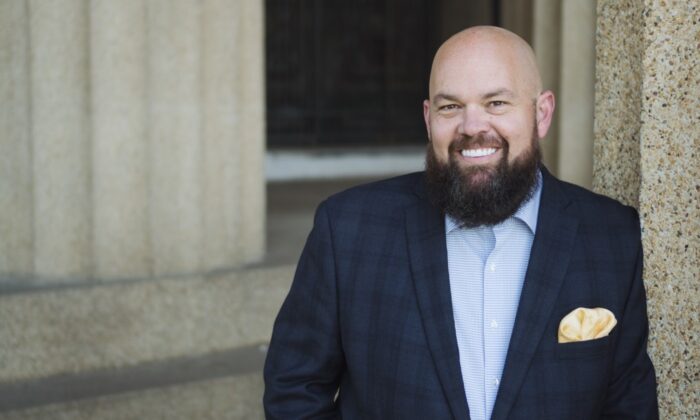 A Philadelphia-based radio personality, Chris Stigall, told The Epoch Times that critical race theory (CRT) is not only showing up in our schools and military but also in other places—even in churches. He believes that CRT is the racial version of Marxism.

Stigall hosts two different radio shows each day and produces a daily podcast as well. According to his website, “Talkers Magazine” has listed him as one of the “100 Most Important Radio Hosts in America” since 2009.

For the past week, Stigall has produced multiple programs on one topic: CRT. He told The Epoch Times that by the time he was able to return to church and his children were able to return to school after the lockdowns last year, he felt as though something radical had hijacked these institutions.

According to criticalrace.org, “critical race theory is an academic movement which seeks to link racism, race, and power … Critical race theorists argue that American social life, political structures, and economic systems are founded upon race, which (in their view) is a social construct.”

In his opinion, CRT is a “purposeful provocation … It pits people against one another, from day one, just by virtue of who they are.” And he believes that this is totally antithetical to everything that America has striven to achieve as individuals.

Because of CRT teachings in schools, Stigall decided to pull his youngest child out of the public school system. He said his youngest child is still quite impressionable, and he doesn’t want her to be steeped in this toxic ideology.

The radio host saw how his older children became so sincerely confused since the term “racist” was being thrown at them just because they are white. His biggest concern is that if the children are “fed a steady diet of ‘you are a bad person,’ how long do kids get that message before they do become really nasty, awful, hostile people?”

Stigall understands that Marxism divides people according to their economic status: the wealthy people are oppressive, and the poor people are oppressed. Similarly, CRT is the racial version of Marxism. “It’s a deconstruction. That oppressed, oppressor dynamic is exactly the same as Marxism. [CRT] is just a different angle of looking at it,” he said.

Stigall mentioned that a Chinese lady gave a “beautiful testimony” on CRT during a recent Loudoun County School District (LCSD) board meeting. Stigall said he trusts those Chinese immigrants more than any Ivy League academic on this topic since they really lived under such repression. Therefore, they understand it better than anybody else. “They are the ones that are shouting the loudest and sounding the alarm the loudest because they have seen it, and they are warning the rest of us. Don’t let it happen here,” he commented on those Chinese immigrants.

The LCSD board meeting which Stigall referred to was held on June 8. The Chinese lady, Xi Van Fleet, said during  the meeting that CRT-related teaching is “the American version of Chinese cultural revolution.” She further emphasized that CRT is rooted in “cultural Marxism” and “it should have no place in our schools.”

The radio host further said it’s not enough to simply ban CRT from schools. Americans also need to go on the proactive and offensive by asserting that schools teach the greatness of this country, “we’re now going to insist our public schools teach the 1776 curriculum, not that 1619 curriculum.”

He warns that the theory is present in more than just our education system. It broke his heart that CRT is preached from the pulpit of his church. Stigall tells others to be on the lookout, “whether it’s our military, our police, our city council, our churches, and our schools. It seems to be infecting everywhere,” he said.

Stigall is not alone. More and more local parents and even school board members have stood up to oppose the teaching of CRT in schools. East Penn parents Maureen and Christopher Brophy filed a lawsuit against East Penn School District on June 14. According to the complaint, earlier this year, the Brophys requested that their children don’t have to take lessons relating to “systematic racism, white fragility, religion, white privilege, Black Lives Matter, and police brutality,” but the request was declined by the school district superintendent.

The Brophys’ attorney Catherine Smith told The Epoch Times in an email that she would not provide any further public comment since minor children are involved in this case.

Another recent example was the Pennsylvania Souderton Area School District board meeting on June 17, the school board president Ken Keith announced: “In Souderton, we are not following or teaching critical race theory in our schools, any more than we are following or teaching Marxism or Communism.” His speech was interrupted by a 30-second round of applause.

Moreover, Pennsylvania state Reps. Russ Diamond and Barbara Gleim recently introduced House Bill 1532, or the Teaching Racial and Universal Equality (TRUE) Act, which aims to ban the teaching of CRT ideology across the commonwealth. It had collected at least 28 sponsors by press time.