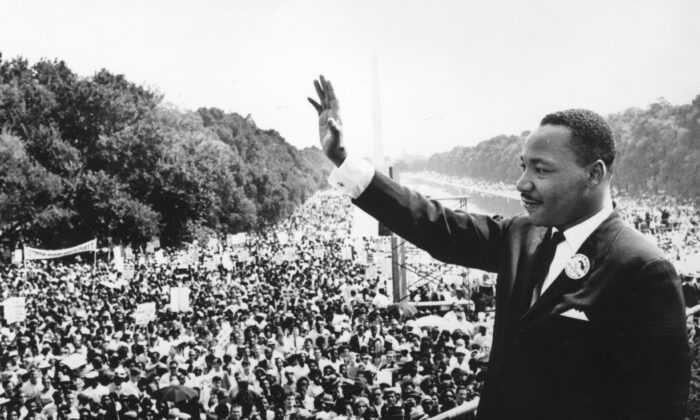 Martin Luther King addresses crowds during the March on Washington at the Lincoln Memorial, where he gave his “I Have A Dream” speech in Washington on Aug. 28, 1963. (Central Press/Getty Images)
Viewpoints

You might wonder why you should care about what a college kid has to say on just about any topic. I don’t blame you. But, on the topic of critical race theory, I would argue we’re uniquely qualified to give our two cents.

I’m an older member of Generation Z. My childhood was not blemished by this newfangled pseudo-philosophy. I thankfully can remember a time when Martin Luther King’s mission was celebrated and upheld in my schooling. But I also was thrust into the critical race theory worldview early in my high school career.

My sub-generation—those of us around college age today—teetered uniquely on the cusp of the explosion of this neo-racist theory. As such, we may be the only ones able to remember a time without it but also know what it means to be steeped in this perverse worldview.

My first recognizable experience with critical race theory came when I was a freshman in high school. In celebration of Martin Luther King Day, we congregated in the auditorium for lectures and activities.

I always approached this day with particular reverence. I was taught its value as a child. It’s a day to recognize common humanity and celebrate our country’s progress toward justice. But that year, my experience was entirely different.

After an introductory speech, the entire student body was told to report to a specific room or building based on their racial identity, systematically segregating students throughout campus.

In doing so, the leaders of the event chose to promote the impression that only those in the same racial category are able to relate to the feelings and experiences of one another. As such, they suggested that conversations about race are better segregated than community-based—ironically on Martin Luther King Day.

I was only 14 years old at the time. It would be years before I even heard the term critical race theory. But, nonetheless, I knew then and there that I dissented. Ever since then, I have watched different iterations of this philosophy creep into my education, impacting the broader culture and mindset of my contemporaries.

Identity politics have exploded on my college campus, the natural byproduct of this misguided neo-racist education we’re steeped in. Generation Z has been divided and told to view one another through the lens of color and difference, and we have done exactly that.

As a believer in Martin Luther King’s authentic mission and cause, this worries me in a truly visceral way. As a culture, we’re willingly turning our backs on the values that promote inclusivity.

I worry, in particular, for the children younger than I am who have never known any different—who can’t recall a time before their immutable characteristics were deemed their defining attributes.

Activist teachers and administrators have hijacked the parental responsibility of activating children and shaping their senses and selves and their general worldview. And, when all authorities seem to bow down to this new ideology, it’s no wonder impressionable young people are swept up in it.

Though such true supporters of critical race theory may be few in number, they’re a powerful minority. Through cancel culture and reputation destruction, their threats of intimidation and slander render them able to shut down most all opposition.

But I have hope, too. There has been a tidal wave of awareness surrounding critical race theory in very recent times. I’d be willing to bet that most people, like myself, didn’t even know the term mere months ago. Nonetheless, it now dominates the national dialogue.

We’re acutely aware of its denigrating effect on society and the wellbeing of our future generations. Parents, teachers, politicians, and activists alike have joined forces to fight this newfangled take on race relations. Even whole organizations have sprung up in opposition.

This is what fills me with optimism, despite the severity of the situation. It’s my hope that more members of my generation, who are uniquely situated in their perspective, will come forward, too. We have been a silent majority. Now we’re making ourselves heard.