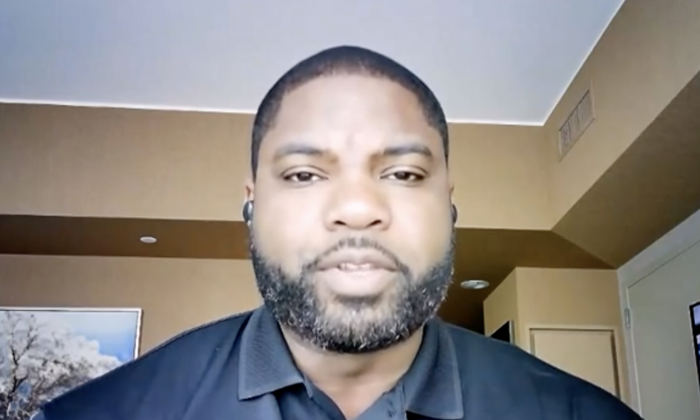 After his recent visit to the U.S. southern border, Rep. Byron Donalds (R-Fla.) said it’s essential that President Joe Biden go to the border and talk with Border Patrol personnel to get a first-hand account of what’s happening before ending the Title 42 public health restrictions.

‘“It’s critical. I don’t, for the life of me, understand how the president and the vice president are making decisions about what’s going on at the southern border when they’re not down there on the ground actually talking to the men and women who have to do the work, who have to do the jobs,” Donalds told NTD’s “Capitol Report” host Steve Lance.

“It’s important to understand exactly what’s happening at the southern border right now, especially with the administration looking at getting rid of Title 42, which is actually going to lead to a massive spike in illegal immigrant entrance into the United States.”

Title 42 is a Centers for Disease Control and Prevention (CDC) order that was put in place in March 2020 under then-President Donald Trump to slow the spread of COVID-19 by ensuring that only essential travel occurred across the U.S. borders.

It’s estimated that when the CDC rule ends, double the number of illegal immigrants will be released into the United States, which is alarming given that in 2021, Customs and Border Patrol (CBP) had more than 1.7 million encounters. It’s estimated to reach 2 million by the end of 2022.

Donalds, along with other Republican members of Congress, including House Committee on Oversight and Reform ranking member James Comer (R-Ky.), recently took a two-day tour of border crossings and other facilities in California and Arizona.

“We wanted to go down there, get a firsthand look at what’s happening now today, with accurate information that’s current so we can try to at least explain to the American people at a minimum what’s happening and also advocate for changes that the president needs to make in order to secure the southern border,” Donalds said.

Comer said he wants to know what the administration’s plan is after ending Title 42.

“The radical open borders policies perpetuated by the Biden Administration are reckless and government mismanagement at its worst. Ending Title 42 authority at the border will make President Biden’s border crisis unimaginably worse,” Comer said in an April 1 statement.

“[House Oversight and Reform Committee] Chairwoman [Carolyn] Maloney must immediately convene a hearing with DHS Secretary Mayorkas to hear what plan, if any, the Biden Administration has to manage the anticipated surge in apprehensions at the southern border.”

White House officials didn’t respond by press time to a request for comment on why the president hasn’t visited the southern border.

Only a few Democrats, all from border states, have appealed to the current administration to keep Title 42, including former congressman and now Texas gubernatorial candidate Beto O’Rourke, who recently said Biden needs a plan before ending the health rule.

“It does not make sense to end this until there is a real plan and the capacity in place to handle those and address those that come over,” O’Rourke told The Texas Tribune on April 12. “I have yet to hear a plan from the Biden administration to address the dynamic we will have on the border once Title 42 ends.”

Donalds believes that it’s crucial for Biden to hear what the CBP officers have to say and what stress they’re under.

“They’re incredibly stressed, morale is low. They view it as they’re not being able to actually do the job that they were hired to do. They’ve largely become an agency of processing people, as opposed to securing the southern border,” he said.

“And what’s worse is that the border agents will tell you that because we’re having to spend so much time just processing paperwork, the drug cartels are using this to traffic more fentanyl, more cocaine, and more heroin into the United States. Border Patrol knows this is happening. The administration has turned a deaf ear to it.”