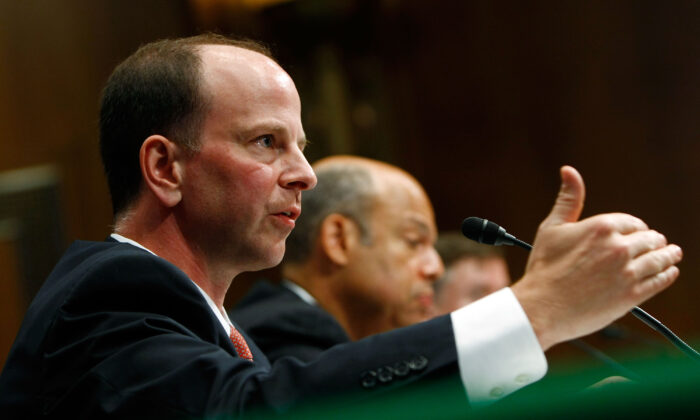 Kris served in the Obama administration as the head of the DOJ’s National Security Division, which oversees intelligence collection under the Foreign Intelligence Surveillance Act (FISA). He’s been an outspoken supporter of impeaching President Donald Trump and repeatedly criticized Rep. Devin Nunes (R-N.C.) for a 2018 memo that alleged FISA abuse by the FBI in connection with the Page warrant.

In response to the report by IG Michael Horowitz, the FISA court ordered the FBI on Dec. 17, 2019, to explain what the bureau has done or will do “to ensure the accuracy and completeness of” its FISA applications.

The FBI “provided false information” and “withheld material information” from the DOJ, the report stated, adding that when FBI personnel do so, they “equally mislead” the FISA court (pdf).

FBI Director Christopher Wray responded on Jan. 10 (pdf), expressing regret over the problems with the Page warrant, and committed to a series of process changes.

That day, presiding FISA Judge James Boasberg appointed Kris to “serve as amicus curiae … to assist the Court in assessing the government’s response to the December 17, 2019, Order.”

Boasberg said, “The amicus curiae is invited to submit written views regarding the government’s submission by January 31, 2020.”

Several issues with the Page FISA warrant were highlighted by Nunes in his Jan. 18, 2018, memo, including that the warrant relied heavily on the Steele dossier, a collection of unsubstantiated claims about Trump-Russia collusion put together by former British spy Christopher Steele. Nunes pointed out that the FBI mostly didn’t or couldn’t corroborate the dossier and the warrant didn’t mention that Steele was paid for his work, through intermediaries, by the Democratic National Committee (DNC) and the campaign of Trump’s then-opponent for the presidency, former Secretary of State Hillary Clinton (pdf).

Kris called the Nunes memo “dishonest” in a March 1, 2018, essay on Lawfare, a blog operated by the Brookings Institute, where Kris serves as a contributing editor and one of the directors.

He noted that the FISA application disclosed in a lengthy footnote that Steele was paid by “a known U.S. person” (Glenn Simpson, co-founder of opposition research firm Fusion GPS), who was, in turn, paid by a “U.S. law firm” (Perkins Coie).

“The FBI speculates that [Simpson] was likely looking for information that could be used to discredit [Trump’s] campaign.”

The Nunes memo left out that the FBI had mentioned this.

“Had the FBI done in its FISA applications what Nunes did in his memo, heads would have rolled on Pennsylvania Avenue,” Kris wrote, calling for “consequences” for Nunes.

Kris argued that what the warrant disclosed “amply satisfies the requirements” and “enabled the court to take Steele’s information with a grain of salt.”

The fact that the warrant omitted that “Steele’s reporting was going to Clinton’s presidential campaign” was listed by the IG report as part of one of the “significant errors” in the warrant.

In his Dec. 23, 2019, Lawfare essay, Kris doubled down on his criticism of what he called Nunes’s “central claim,” but acknowledged that Nunes was correct on some of his other points.

In the essay, while acknowledging that the problems with the Page warrant were “serious,” he focused on the fact that the IG didn’t find “documentary or testimonial evidence” that the FBI initiated its investigation of the Trump campaign and the subsequent surveillance of Page and others out of bias.

In his congressional testimony, Horowitz made clear that he didn’t rule out bias, when questioned by Sen. Mike Crapo (R-Idaho).

Horowitz: That is not—as to the operation of these FISAs—what I’m telling you.

Kris didn’t respond to a request by The Epoch Times for comment that was sent to his law firm, Culper Partners.