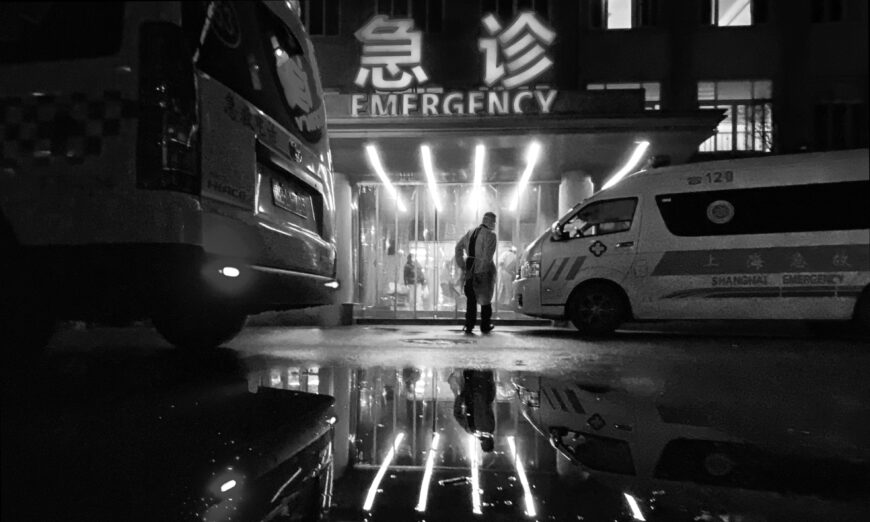 An ambulance driver walks into the busy emergency area of a hospital on January 13, 2023, in Shanghai, China. (Kevin Frayer/Getty Images)

An expert has dubbed China’s COVID management as a “crisis of a scale unseen since Mao” in regard to its death toll.

In an opinion piece published on Jan. 5, sinologist and military adviser Ben Lowsen warned that Chinese citizens potentially face the country’s largest mass-death event since the Great Chinese Famine of 1959–1961.

Yet health experts including virologist Dr. Xiaoxu Sean Lin and Stanford Senior Fellow Dr. Scott Atlas are concerned that the numbers may still be underreported.

While this increase seems more reasonable than the 37 deaths previously reported during that timeframe, Lin expressed that a death toll of roughly 60,000 does not justify the reports of inundated morgues.

China’s recent announcement about its population decline for the year 2022 has also sparked speculation that the country has been faring a lot worse than it’s let on.

China’s 2022 decline of roughly 850,000 people to a total of 1.41 billion, according to the country’s National Bureau of Statistics, is the first drop officially reported by China since 1961—the last year of the country’s great famine.

Official recognition of the declining population in 2022 is an “extremely important historical inflection point,” Fuxian Yi, a researcher from the University of Wisconsin at Madison and a longtime critic of China’s single-child policy, wrote on Twitter.

Other evidence of higher death tolls comes from Tongjiang County in Sichuan Province. The county’s official reports showed that by the end of 2019, there were over 670,000 residents, but at the end of November 2020, this number fell to just over 520,000.

Within 11 months, the resident population fell by more than 148,000, which is over 20 percent of the residents.

The population decline is unlikely to be caused by migration, considering Tongjiang County provides a major labor force for Sichuan Province and is marked by many employment opportunities.

Since the discovery of these numbers, Tongjiang County’s official webpage reporting these data has been inaccessible.

With estimates of 900 million people infected in China, this would mean that the infection fatality rate for COVID-19 in China is less than 0.0067 percent. But such a case fatality rate would be significantly lower than any of those belonging to first-world countries that lead in health care resources and technology.

China reports that the dominant COVID variant is Omicron, which is associated with a lower case fatality rate of about 0.3–0.4 percent in the United States. However, researchers are uncertain if Omicron’s reduced severity is attributed to people’s immunity to the virus, or because the variant causes less pathology.

Hong Kong, which has a better health care distribution compared to mainland China, reported an overall death toll (pdf) of around 0.1 percent during the Omicron wave.

“We cannot trust the numbers coming out of China. They didn’t make sense in the beginning,” Atlas said of China’s COVID data in a recent interview with NTD, a sister media outlet of The Epoch Times.

While Chinese authorities may have made revisions to the death toll, Atlas suggested that the true situation remains concealed.

“It’s very difficult to figure out what’s going on when there’s no transparency,” said Atlas.

Lin, a virologist and former lab director at the viral branch of the Walter Reed Army Institute of Research, expressed reservations on whether it was Omicron causing the outbreak.

He pointed to the rapid outbreaks reported in China’s leading cities and immediate rural areas, remarking that the speed of the infections may indicate that the viral load in China is many folds higher than outbreaks seen outside of China. Lin compared the country’s recent outbreak to a tsunami or sandstorm.

“The [progression] to severe symptoms can be very different when the body is attacked by [a] large volume of [the] virus,” he said. If the viral load is small, severe symptoms may present in a few days, but “if you’re really overloaded, the whole process will speed up.”

Reports of crematoriums inundated with corpses suggest that the actual situation in China may be a lot more severe than we’ve been led to believe.

Tang told NTD, the sister media of The Epoch Times, that with less than 60,000 deaths in a month, the number of funeral homes in Beijing alone would be enough to manage the bodies.

There are 94 furnaces in Beijing, and if all of these furnaces increased operating hours to 24/7, it would take less than 27 days to cremate all these bodies.

However, that has not been the case. Hebei, a province near Beijing, has also had several of its funeral homes increase their hours to 24 hours operating time, indicating that the real body count is much higher.

A worker at Baoxing funeral home in Shanghai told The Epoch Times in December 2022 that they were burning 400 to 500 bodies a day, up from the maximum of 90 before the pandemic restrictions were lifted.

Babaoshan Funeral Home, Beijing’s main crematorium, also had to increase to 24 hours of operation within a week after reopening, due to overwhelming demands.

A funeral home employee who identified as Lin told The Epoch Times on Dec. 14, 2022, that there was a week’s backlog in cremations.

“We are very busy every day, and we had never been so busy,” the employee said. “There are more people being cremated every day than before, and the appointment calls are too many for us to handle. Many people are queuing up [for our service]. We don’t have any rest time here at all.”

The facility hosts 19 cremation furnaces, according to 2017 reports, and is apparently Beijing’s only place for specialty cremation, containing wider, longer, and taller furnaces for tall or obese corpses.

Looking at many reports of 24-hour operating crematoriums, Lin figured that if all of China’s reported cremation furnaces were now running 24/7, that would amount to around 6 million deaths between Dec. 8, 2022, to Jan. 12.

But that figure is likely only about half of all deaths, as cremation only made up less than 60 percent of Chinese people’s funeral procedures in 2021. The death toll could have reached 10 million by now, Lin said.

Since early January, NTD has found at least 37 crematoriums that have put forward bidding documents for furnace construction on government websites.

Perhaps the most telling example of cremation demands is what happened with Shantou Funeral Management Station Funeral Home in Guangdong Province. According to what NTD uncovered, the center needed to make an urgent purchase of two furnaces. Construction was to begin within three business days and the furnaces had to be installed within 10 days of payment.

Even prior to the recent COVID-19 outbreak, data from official sources suggested suppression of real death tolls, or conflicting reports.

The Chinese Center for Disease Control reported 3,869 COVID deaths in Wuhan over the entirety of 2020, with a third of the deaths added on April 17 of that year. Prior to the update, the city reported around 2,500 deaths.

Yet a Chinese report published in the British Medical Journal contradicted China’s official reports, showing that between January and March 2020, there were 5,954 excess deaths in Wuhan, with COVID-related pneumonia accounting for 3,653 cases.

The study’s authors were affiliated with China’s Center for Disease Control and Prevention, and therefore had access to all-cause mortality data from the country’s national surveillance system.

The study’s supplement registered around 2,500 excess deaths in Wuhan through the surveillance system, but the system only covers a fifth of China and Wuhan’s total population.

However, researchers from The Economist suspected that the total excess deaths and COVID-related deaths were even higher.

These researchers assumed that the other untracked areas in Wuhan would experience similar rates of excess mortality, and modeled the data to be around 13,400 or more.

“That is more than triple the official count, and more than double the estimate in the BMJ paper,” the authors investigating for The Economist wrote.

During the two years of the Great Chinese Famine, an estimated 15 to 55 million people died. After 1960, the Chinese Communist Party stopped publishing any statistical data that might indicate economical performance. Data publication did increase, though, beginning in 1979.

Lowsen noted how the Chinese regime also withheld the death tolls during the famine, and that we are now seeing an “ominous” repeat, with the regime “essentially [giving] up on providing COVID-19 statistics.”