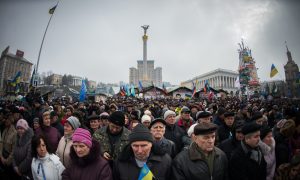 Uprising in Ukraine: Western Nations Must Heed the Cries for Help
0 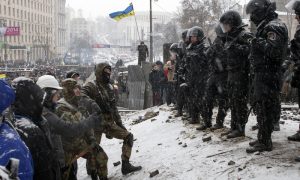 Ukraine: Out of the Frying Pan
0 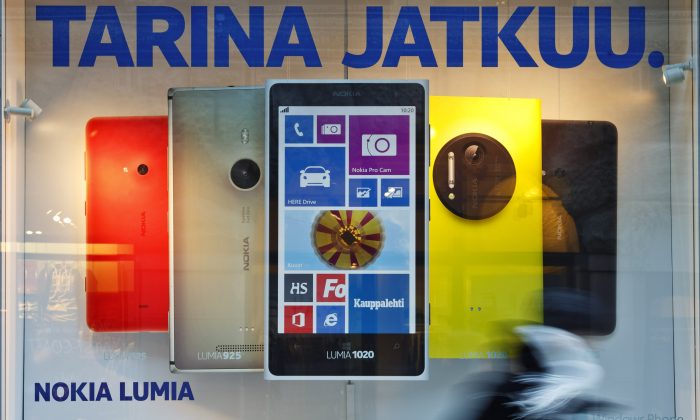 An advertisement in a flagship store of Finnish telecom manufacturer Nokia reads "the story goes on," in Helsinki, Finland, on Jan. 23, 2014. (Roni Rekomaa/AFP/Getty Images)
Crisis in Ukraine

Crisis in Ukraine: A Lesson in Finnish History May Be the Key to a Peaceful Conclusion

The Russian media and ousted Ukrainian President Viktor Yanukovych are striking in their attempts to rewrite events in Kyiv, calling it a “fascist coup” that justifies invading a sovereign country.

Probably no one outside Ukraine has cut through the propaganda more effectively than Timothy Snyder, history professor at Yale and author of “Bloodlands: Europe Between Hitler and Stalin.” He said, “Ukraine (under Yanukovych) was governed by probably the most financially corrupt regime in the history of the world, which by the end of its rule was not only physically oppressing, but finally killing its citizens … (for) exercising their rights to speech and assembly.”

Snyder notes about the early protests, “Enter … an Afghan … Mustafa Nayem, the man who started the revolution. Using social media, he called … young people to rally on the main square of Kyiv in support of a European choice for Ukraine. That square is called the Maidan … an Arab word. During the first few days of the protests, the students called it the Euromaidan. Russian propaganda called it, predictably enough, the Gayeuromaidan. When riot police were sent to beat the students, who came to defend them? More ‘Afghans’ … Ukrainian veterans of the Soviet Red Army, men who had been sent to invade Afghanistan during the Soviet invasion of that country in 1979. These men came to defend ‘their children,’ as they called the students.”

“In all of these ways, the ‘decadent’ West, as Russia’s foreign minister put it, was present. … The Russian press presented the protest as part of a larger gay conspiracy. The Ukrainian regime instructed its riot police that the opposition was led by a larger Jewish conspiracy. Meanwhile, both regimes informed the outside world that the protesters were Nazis. Almost nobody in the West seemed to notice this contradiction.”

When Yanukovych’s bodyguards abandoned him, he fled to Russia. The day after he told a press conference there that he had no foreign bank accounts, the Swiss, Austrian, and Liechtenstein governments ordered a freeze on his assets and those of his son and 20 Ukrainian officials. The Peterson Institute in Washington estimates that he and his family alone stole between US$8 billion and US$10 billion yearly since 2010.

Ukraine’s Parliament then elected Arseniy Yatsenyuk prime minister by a vote of 371–1. He told MPs, “About US$70 billion has been withdrawn from Ukraine’s financial system to offshore accounts over the last three years. Now it’s clear that they withdrew the funds that were raised as loans under state guarantees and stolen by representatives of the previous government.” He added, “The treasury is empty,” with just US$400,000 left in the government’s coffers and only US$15 billion in exchange reserves to pay back US$12 billion in debt maturing. Most sensibly, he urged Russia, which he referred to as Ukraine’s “partner,” not to “wage war on us … for we are friends.”

First, a hard-line approach in Ukraine would both rally nationalists in Russia and intimidate domestic advocates of democratic reform.

Second, a swift and bloodless victory would be easy in Crimea. This would undermine the confidence of soldiers in eastern Ukraine and give pause to any government contemplating military assistance for Kyiv.

Third, Putin wants to advance his rival civilization model. He, his advisers, and the compliant Russian media believe the Ukrainian events were caused by a decadent European civilization, which advances the rights of cultural and sexual minorities. Putin’s ability to associate his bizarre notions here with national strength in a military victory might enable him to project his intolerance beyond Russian territory. This prospect is as disturbing as his military aggression.

Among the violations of international norms in deploying unlabeled Russian soldiers across Crimea, Putin violated the Charter of the United Nations and the Helsinki Final Act. He also shredded the 1994 agreement of Russia, Ukraine, the United Kingdom, and the United States, under which Ukraine, then the third-largest nuclear power on earth, gave up all its nuclear weapons, leaving the somber lesson that if a country gives up its nuclear weapons it invites invasion from authoritarian neighbors.

Putin also claims a right to invade a neighbor to defend the undefined rights of a minority language community, or as he put it in a press conference on March 4, “people who are closely tied (sic) to us historically, culturally, economically.”

Many Russian speakers across Ukraine have already signed a petition saying that they do not need any external parties to protect their rights.

Another presumed benefit for Putin is diverting Russians from their economic problems. Their economy fell from a 4.5 percent growth rate in 2010 to 1.3 percent in 2013. The ruble has fallen lately by almost a fifth. The longer outlook is troubling, partly because of a rapidly aging population. Nervous investors, adversely affected by widespread corruption, are now asking whether this is the beginning of renewed Soviet-era imperialism. Latvia, Lithuania, Estonia, and Kazakhstan are potential future targets.

Provisional authorities in Kyiv are now being replaced by a new government, chosen by Parliament. The new prime minister is a Russian-speaking technocrat. Both major presidential candidates in the elections set for May are Russian speakers. One of them, Vitali Klitschko, is the son of a general in the Soviet armed forces, best known outside Ukraine as a heavyweight champion boxer. He is Russian-speaking. Russian should be restored quickly as an official language in the country.

In short, we are not dealing with a fascist coup at all. In Snyder’s words, “What has taken place is a popular revolution, with all of the messiness, confusion, and opposition that entails. The young leaders of the Maidan, some of them radical leftists, have risked their lives to oppose a regime that represented, at an extreme, the inequalities that we criticize at home. They have an experience of revolution that we do not. Part of that experience, unfortunately, is that Westerners are provincial, gullible, and reactionary. Thus far the new Ukrainian authorities have reacted with remarkable calm.”

Martti Ahtisaari, former president of Finland and a Nobel laureate, said, “Respect for the territorial integrity of a sovereign country is essential. Acknowledging this is a precondition for building a peaceful future for all citizens of Ukraine.”

Achieving this in the present difficult circumstances might well require Ukraine to follow the example of Finland itself after World War II and become fully independent from both Europe and Russia, while trading and being on equally good terms with both.

“Finlandization” is unpalatable to some, but it is instructive to remind ourselves of what Finland is like today—strong, united, prosperous, and free. This option offers Ukrainians the best opportunity for a democratic future while maintaining their territorial integrity.

There is still probably a narrow window of opportunity to negotiate such a solution before a new Iron Curtain possibly descends on Europe.

This article has been previously published on Yahoo! Canada.