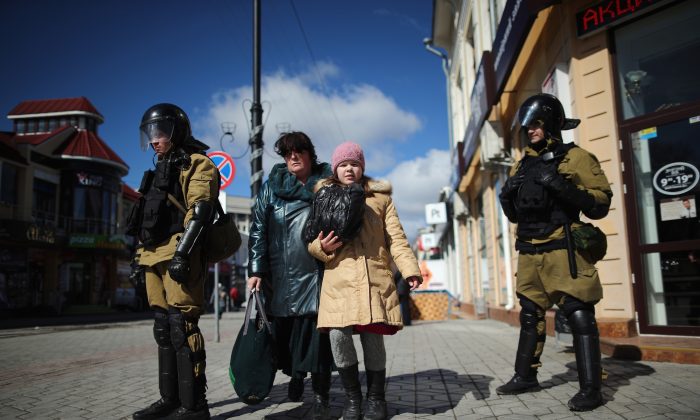 Members of the public walk between a line of Russian and Ukrainian Berkut riot police in Simferopol, Crimea, Monday. (Dan Kitwood/Getty Images)
Tech

An article titled, “Crimean Voters Excited To Exercise Democracy For Last Time,” is from The Onion, the preeminent satire news website in the U.S., but some believed the content.

The article reads: “Following yesterday’s referendum in which 97 percent of voters cast ballots in favor of seceding from Ukraine and joining the Russian Federation, Crimean citizens expressed their excitement Monday at participating in the democratic process one final time.”

According to its disclaimer, The Onion is a “satirical weekly publication published 52 times a year on Thursdays.”

“The Onion uses invented names in all its stories, except in cases where public figures are being satirized. Any other use of real names is accidental and coincidental,” it adds.

On social media websites, some users were confused by the article’s content. It had more than 10,000 shares on Facebook on Monday.