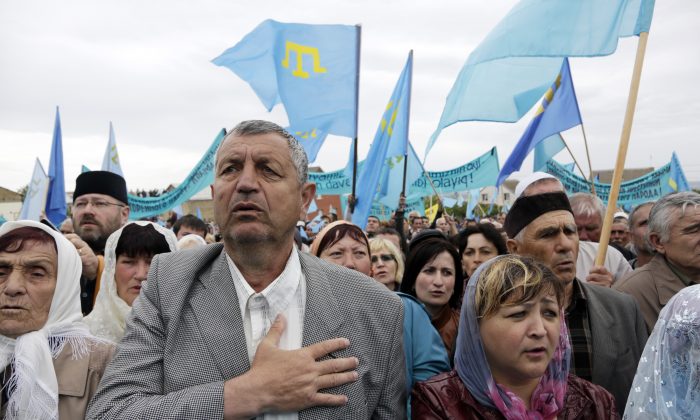 Crimean Tatars attend a memorial ceremony marking the 70th anniversary of the deportation of Tatars from Crimea, near a Mosque in Simferopol, on May 18, 2014. (Max Vetrov/AFP/Getty Images)
Europe

BRUSSELS—It was traditional for Crimean Tatars, a Muslim Turkic ethnic minority, to hold a large gathering for Human Rights Day in the central square in Simferopol, Crimea’s capital, on Dec. 10.

But this year the Mejlis, a representative body of the Crimean Tatars, were told by Crimean authorities that they will not be able to hold their activities this year.

The head of the Mejlis, Rafat Chubarov, said this is just an example of the many ways Crimean Tatars have been repressed since Crimea fell under Russian control in March.

“Imagine that you lived in your home, in your country. You were used to a set of laws that you abided by, and then some people came and said that from this morning on, you will live in accordance with what they tell you. You have to live according to very different laws, you have to worship another set of values, you have to simply forget your opinion and only welcome those who brought war to your land,” said Chubarov at a hearing on Ukraine and Crimea at the European Parliament on Thursday.

Russia has left a bad taste in the mouth of many Crimean Tartars since it first took over the peninsula in 1873.

In 1944, Stalin actively deported the Crimean Tatars from their land and relocated them east, mostly to Uzbekistan and Kazakhstan. Those who survived exile were able to return 50 years later when Crimea was part of a newly independent Ukraine.

Now back home, Chubarov said Russian rule is a threat to his people, which make up roughly 12 percent of the Crimean population.

“Russia came again, and Russian authorities consider Tatars in Crimea to be opponents,” he said. “We do not welcome Russia’s arrival because it is our land.”

Chubarov was living in Crimea in February when the Russian troops arrived. As the head of the Mejlis, he was involved in negotiations between the Russian and Ukrainian troops.

“Of course, in this situation we expected that the international community would help so justice would prevail,” he said.

He attended a meeting of the Organization for Security and Cooperation in Europe (OSCE) in Azerbaijan in July to gather international support for his cause. On the way back to Crimea he was denied re-entry.

“I was told that Russia denied me the right to enter Russia for the next five years. I said I was not going to Russia, I am going home, to Crimea. Then they used armed personnel to make me go to Ukraine,” he said. He and another senior member of the Mejlis have been living in exile ever since.

The current situation of Tatars in Crimea remains tense.

Human Rights Watch (HRW) said in a 2014 report that at least 15 pro-Ukraine and Crimean Tatars have “disappeared” since March, but the Ukrainian government puts that number closer to 20, and HRW acknowledges the number is probably much higher.

“We need to look at the main reason for all these misfortunes—Russia’s aggression,” said Chubarov. “As long as it exists, we will not be able to have human rights.”