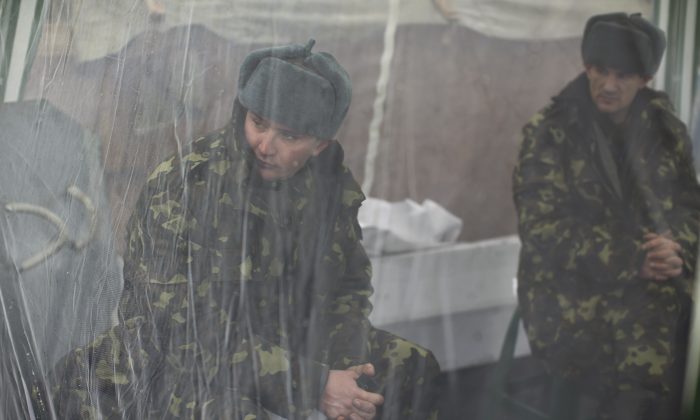 Anti-Yanukovych protesters sit inside a tent as they guard one of the entrances in Kyiv's Independence Square, the epicenter of the country's current unrest, on March 2, 2014. A convoy of hundreds of Russian troops is heading toward the regional capital, Simferopol, on the Crimean peninsula in Ukraine today. (AP Photo/Emilio Morenatti)
Crisis in Ukraine

As events in Crimea escalate and become a focal point in the broader struggle within Ukraine, between Ukraine and Russia, and between Russia and the West, one key question is about Russia’s larger game plan.

Given the symbolic and strategic importance of Crimea to Russia—historically part of Russia, with a large ethnic Russian population and home to Russia’s Black Sea Fleet—it would be foolish to assume that Russia is just reacting to events as they evolve. The speed of events over the past few days suggests that there is some degree of Russian reaction to developments that may have been unplanned or unforeseen.

At the same time, the mobilization of troops in the western military region, movements of equipment and personnel within Crimea and the careful management of Russia’s “communication” strategy offers some insight into what the Kremlin’s larger game plan might be.

Three dimensions are apparent. Despite the escalating rhetoric in Kyiv and Moscow, it is unlikely that Russia has started a military invasion of Crimea. While it is not inconceivable that those “armed men” who seized airports and government buildings in Crimea took their orders from Moscow or at least did not act without Russian knowledge or approval, Russia at present is flexing, rather than deploying military muscle. The Kremlin has made it quite clear that it takes Crimea seriously, but has so far stopped short of an irreversible escalation of the crisis.

Yanukovych’s statement that he did not ask for a Russian intervention on his behalf (as well as the fact that he is in Russia rather than in Crimea) and calls by the Russian president, Vladimir Putin, for a normalization of the situation in Ukraine indicate that Russia has no immediate interest in any direct military involvement.

That said, military mobilization and exercises by Russia give Russia an option to act quickly and decisively should the need arise, for example if the Ukrainian government sought to assert itself by force in Crimea, threatening ethnic Russians and Russian assets there. Moreover, legislation introduced in the Duma in Moscow that would “facilitate” an annexation of parts of Ukraine also points to what Russia’s Plan B might be. As we argued earlier, escalation is not in the Kremlin’s interest, but still remains the lesser of two evils if there was a serious threat to Russian interests in Crimea.

Russia might calculate that Ukrainian government capacity to organize effective resistance is rather limited. The core of the Ukrainian army consists of ethnic Russian and Russian-speakers, mostly from eastern Ukraine and Crimea, and the army’s senior commanding officers were overwhelmingly educated at Soviet military colleges.

Disbanding the country’s special riot police (Berkut) not only deprived the government of a well-trained and equipped force of some 4,000 personnel but also created a pool of aggrieved and resentful fighters with skills and capabilities that are highly useful in a civil war scenario, and some of whom are most likely behind the “Russian invasion” of Crimea.

Moreover, since the Soviet period, Crimea has been a highly militarized region, with significant investment in the military-industrial complex, and a significant part of the population has worked or currently works in the military sector. Additionally, Crimea’s location favors it in any potential military confrontation with Kyiv, given how easily access to the peninsula could be blocked on land, and, as we have seen already, ports and airports be captured by separatists. So even if there was a violent confrontation between Kyiv and Simferopol, the latter may well prevail without or with only minimal Russian support.

So what may be Russia’s longer-term game plan? Putin faces a difficult choice right now. If he returns Crimea to Russia, Putin will be a national hero for generations to come. Yet, in geopolitical terms there would be an exceptionally high price to pay, not only in terms of Russia’s reputation but also in terms of its relations with Ukraine, the West, and other countries in the post-Soviet space.

A more realistic assessment of costs and benefits, however, leaves room for another scenario. During the past two months, it has become apparent that a significant part of the Ukrainian population is supportive of the idea of closer links with the EU, but that this equally not a universally shared sentiment across the country. Whoever forms the next government in Kyiv will be less pro-Moscow than Yanukovych and it is highly likely that, in a major turn of events, Ukraine will sign its Association Agreement with the EU and receive further financial and political backing from Brussels.

As the situation in Ukraine stabilizes (and provided that political and institutional arrangements are found that incorporate at least some otherwise pro-Russian political forces) an uneasy status quo may take hold in mainland Ukraine. This would also be in the interests of major economic players in the country, including some of the so-called oligarchs that have been among the major domestic supporters of Yanukovych and the Party of the Regions and some of whom are backed by Russian financial interests.

Crimea, on the other hand, may well remain a contested battleground between pro- and anti-Russian forces there. This would be a factor of continuing instability for Ukraine, but also a major issue in bilateral relations between Ukraine and Russia and between Russia and the West. Similar to the situation in Transnistria, Abkhazia, and South Ossetia, however, it would also be the kind of low-cost, highly effective leverage Moscow may desire in order to retain some control over how far Ukraine moves out of the Russian orbit. After all—like the West—Russia’s Ukraine policy is part of a larger geopolitical game over influence in a strategic region contested by an emerging great power (the EU) and a rival who has been in decline for two decades and unable to reverse this trend to date.