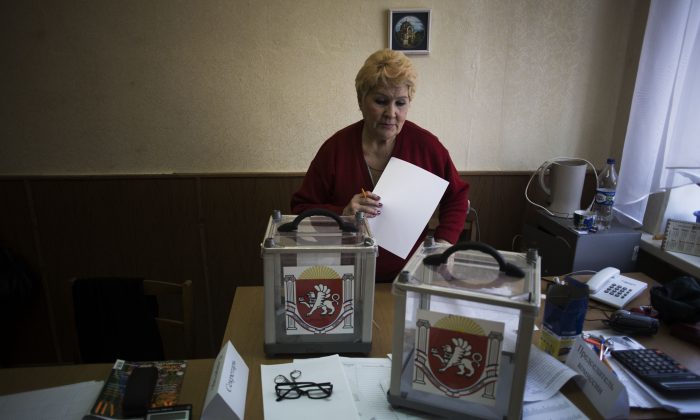 A Ukrainian woman, who is a member of the district electoral committee, makes final preparations as she stands next to ballot boxes for Sunday's referendum at a polling station in Simferopol, Ukraine, on March 15, 2014. Tensions are high in the Black Sea peninsula of Crimea, where a referendum is to be held Sunday on whether to split off from Ukraine and seek annexation by Russia. (AP Photo/Manu Brabo)
Crisis in Ukraine

Crimea an Armed Camp as Tensions Rise Ahead of Referendum

In all likelihood, a referendum will take place in Crimea on Sunday, March 16. The poll has been hailed in Moscow and Simferopol as an opportunity for the people of Crimea to express their preference for the future status of the peninsula and, equally, has been derided as illegal and illegitimate in Kyiv, Washington, and across the EU. Following talks on Friday in London with his U.S. counterpart, the Russian foreign minister said that Russia would respect the will of the people of Crimea.

While the problems extend well beyond the legality and legitimacy of the referendum, they are a good point to start. Under the Ukrainian constitution, a referendum about questions affecting the country’s internationally recognized borders must be nationwide. In this sense, the referendum is clearly in breach of the constitution and any result would be null and void. Moreover, voters will only have two options: to back an earlier resolution of the Crimean parliament to seek accession to the Russian Federation or reinstate the Crimean constitution of 1992 (subsequently abolished by the Ukrainian parliament).

This absence of a status quo option, and the increased presence of Russian troops in the peninsula, puts a big question mark over the degree of choice that Crimeans really have in this vote. That said, a strong traditional affinity to Russia and Russian culture is a reality in Crimea, as is the fact that many deep-seated social and economic problems in the peninsula have been ignored by successive Ukrainian governments.

The timing of the referendum, and the choices on offer, are hardly conducive to constructive crisis management. Whatever the result, the referendum is not the end of the story. Crimea is divided politically and ethnically, depends on Ukraine for supplies of water and electricity, its economy is all but thriving, and recent developments have almost certainly “killed” this year’s tourist season.

Much like the Russian-Georgian war of 2008, it has also sent shock waves across the region, from the Baltic states to Moldova and the South Caucasus, leading US senator John McCain to propose the integration of Georgia and Moldova into NATO.

While the U.S. secretary of state, John Kerry, in a statement before the House of Representatives, recognized Russian interests in Crimea, rhetoric in the West has nonetheless hardened and sanctions have been credibly threatened by the United States and EU, crucially receiving backing on Thursday from Germany’s chancellor Angela Merkel.

A lot is at stake the referendum, yet nobody’s problems will be solved by it whatever the outcome. So why did Russia instigate the vote in the first place?

One possible explanation, denied by Lavrov, is that Putin’s ambition was and is to get control over all of southeastern Ukraine with its industrial base and Russian-speaking population. This would secure the Sevastopol naval base and make Russian control over Crimea a less costly logistical and military proposition. It also serves Putin’s domestic popularity as the man who brought about Russia’s rebirth as a true great power.

Such a calculation, however, would have been in part predicated on significantly higher popular support in eastern Ukraine. This has not been forthcoming so far, but with the Ukrainian economy in a deep crisis now with significant structural reforms likely to be required by international donors, many enterprises in the eastern part of Ukraine will suffer, unemployment will increase, and economic power brokers currently more aligned to the new government may change sides. This crisis is likely to intensify over the coming months and more pro-Russian protests could occur in eastern Ukraine.

Russian military exercises at the borders of Eastern Ukraine, however, could be a sign that Putin is unwilling to wait until the autumn for the crisis to escalate and offer a pretext for further Russian intervention.

As these battle lines are drawn, not all hope is lost, though. While Moscow may never get a formal acceptance of the 21 February Agreement now, one of its key provisions—new elections at the end of the year rather than the end of May—may still offer an acceptable compromise. It would allow Moscow to build up a more desirable candidate, most likely Yulia Tymoshenko, whose electoral support is below 10 percent at the moment. Keeping the status quo in Crimea until then would allow Putin to negotiate from a position of strength with a new president, enable him to push for Ukraine’s federalization, and lock a new government into a deal that secures Crimea and puts serious brakes on any further westward move of the country.

Postponing elections would potentially also be useful for the new government in Kyiv: there is no likely candidate at the moment who represents the eastern part of Ukraine and Crimea, thus making an election boycott there more likely and crucially undermining the legitimacy of any new political regime.

This brings us back to the referendum. It is difficult to see Moscow or Simferopol back down and ignore what is most likely going to be a Yes vote in favor of joining Russia. Nor can the new government in Kyiv and its Western partners not maintain that the referendum is illegal.

However, neither side needs to act immediately upon the announcement of referendum results. Russia is under no pressure to annex Crimea, given the hold that it already has. If Russia does not push ahead with breaking Ukraine apart, the West is not obliged to impose sanctions.

With the long-term future of Ukraine and east-west relations in mind, both sides could still acknowledge, as they have maintained throughout, that all sides have legitimate interests that need to be respected and dialogue is the only way forward from the current impasse. The Kerry-Lavrov talks in London, described as constructive by Lavrov, could be an indication that this has been understood.

The purpose of the referendum, then, would have been strategic ploy not for the break-up of Ukraine, but for securing long-term Russian interests in the eastern part of the country and in Crimea.