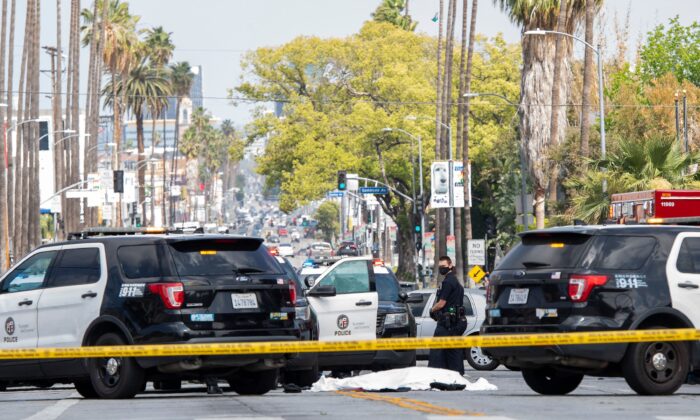 Los Angeles Police Department officers stand at the corner of Fairfax Avenue and Sunset Boulevard where a body covered in a white sheet lies on the pavement in Los Angeles on April 24, 2021. (Valerie Macon/AFP via Getty Images)
Southern California

Crime Up in LA, Including Killings

LOS ANGELES—Los Angeles saw spikes in select categories of crime in 2021, most notably a nearly 12 percent year-over-year climb in homicides.

Mayor Eric Garcetti noted that the pace of homicides was stemmed in the second half of the year.

“To put that in context, I remember the first half of this past year, when those numbers were well north of 25 percent,” Garcetti said of the homicide rate.

He also said that Los Angeles remains among the safest of the nation’s most populous cities in terms of the homicide rate.

Los Angeles Police Chief Michel Moore said the creation of a violent crime taskforce put more officers on the streets and on foot patrols, interacting with residents and community groups.

“Our focus this year has been to shift our resources on this violent crime, particularly shooting violence and robberies, particularly robberies in the second half of the year where we saw the increase in their representation in the number of robberies involving a firearm,” Moore said.