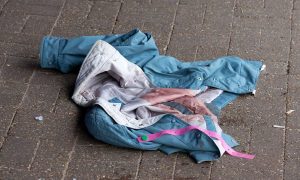 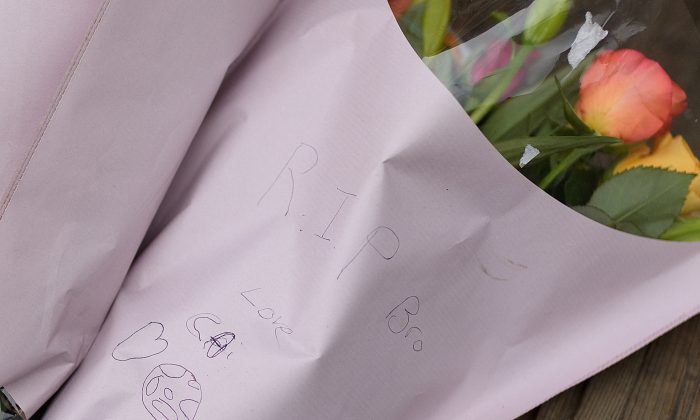 Flowers with a card reading "R.I.P. Bro" is seen near to where the murder of 14-year-old Jayden Moody took place, on Jan. 09, 2019, in London, England. (Leon Neal/Getty Images)
Viewpoints

Crime Soars in Britain as 2019 Dawns

American fans are, for the most part, non-violent. The main reason why, even after many years in the UK, I have never attended a soccer match is because of my fear of hooliganism, a curiously vicious form of fan confrontation that characterizes many sports events.

When I called to reserve a seat for an exhibition American football game at a London stadium, the operator asked me in which section I wanted to sit. I said I had no preference. She explained that fans of rival teams “had to be separated.” I told her I didn’t think American fans would kill each other, but she warned I could be “attacked” if someone near me found out that I was not a supporter of their team. Huh?

My point here is that violence used to be confined to soccer, but now, murder in the street has become part of British life. Several years ago, a friend gave up driving because of terrifying “road rage” from other drivers. She joked, “Carol, if we Brits had guns there would be as much homicide here as in an American city.”

Now, in the first week of 2019, a staggering series of front-page, prime-time news-level murders has unfolded in Britain.

On New Year’s Eve, a bouncer, Tudor Simionov, 33, who had only just moved to London from Romania with his fiancée to seek a better life, was mobbed by a group of angry young men who wanted to crash a private party in fashionable Park Lane. He was standing in for a friend who had wanted the night off. His reward for doing this? Stabbed to death. His fiancée is distraught, and the place where he was murdered is strewn with flowers and candles from the general public.

In the first week of 2019, there was a further string of gruesome murders that made front pages and topped the network news. A friend in Rome called to ask what was going on, as the UK violence was being covered by Italian media.

On Jan. 4, Lee Pomeroy, 51, got into a low-level disagreement with a young man who had boarded a train heading for Waterloo and was promptly stabbed nine times in front of his teenage son. The station at which his death unfolded is, like the Park Lane murder scene, strewn with flowers. Those who knew Pomeroy, an IT consultant, said he wouldn’t have hurt a fly. The suspect now in custody says he “hears voices.” Should he not have been confined to a psychiatric facility and not out on the street? Am I being Dickensian in that view?

At Manchester Victoria train station on New Year’s Eve, a man shouting “Allahu Akhbar” and “Long Live the Caliphate” stabbed three bystanders but was detained under the Mental Health Act. Evidently, he is not considered a terrorist.

Over the years, we have heard numerous stories of horrific attacks across the country by “the mentally challenged.” Some say the Conservative government in place since 2010 has done little to fund mental health care. My argument is “no Bobbies on the beat.” I haven’t seen a cop in my neighborhood for about 20 years, and the reduction in police support by a Conservative government can only be called bizarre. Albanian gangs proliferate, but there appears to be little control of this aspect of UK crime.

The youngest victim to die on London’s streets in the new year, 14-year-old Jayden Moodie, was killed on Jan. 8. He was riding a moped in Leyton, East London, when a gang in a Mercedes knocked him off the bike, got out, and stabbed him to death. Jayden had moved from Nottinghamshire with his mother six months ago to “seek a better life.” Rival gangs The Beaumont Crew and Oliver Close Gang may have been involved, but the boy’s relatives insist he had no involvement with drug trafficking.

An estimated 200-plus gangs operate in London and other British cities, including the “grooming gangs” who entrap very young girls into sex slavery. Many have been jailed, but police forces need more resources to bring a halt to this activity. Urban guerrilla warfare describes the carnage.

Gangland murders on British streets included the 2015 death of 17-year-old Marcel Addai, a member of The Hoxton Boys, slain by no less than four men from the rival Fellows Court gang. Mark Heywood QC told the Old Bailey court hearing that Marcel “died a very short walk from his own front door, surrounded by enemies. He was put to the ground and then stabbed and slashed multiple times before being left, beyond help, for dead.”

What can be done? London’s police presence is small. Cops are not armed. Then again, it can be argued that Chicago has had its share of violent crime and the substantial police presence does not seem to have helped.

A former London gang leader, Nequela Whittaker, told the BBC: “Young people argue on social media over nothing. A boyfriend or girlfriend is in a feud and it escalates … Young males are coming from homes with no fathers, no male role models. Many are lacking love … Until you’ve either killed someone or it’s you in that body bag … you’ll just carry on.”

On British television just after New Year’s Day, a teenager and his mother were interviewed. She asked him why he carried a knife. He calmly replied that if he ended up dead, so be it. Gun crime has risen at an alarming pace in a country where firearm ownership is strictly controlled. There is no figure for 2018, but the Office for National Statistics (ONS) records 6,604 offenses for 2017.

In the year from July 2017 to June 2018 just in England and Wales, the ONS reported that recorded offenses had risen to 5.6 million from 5.2 million in the previous year’s data. In the last year, knife crime increased by 12 percent and recorded robbery, rape, and murder cases totaled about 40,000. This is not a big country; the alarming crime rate is discussed in Parliament, at City Hall, and on endless television and radio broadcasts.

London Mayor Sadiq Khan (Labour) and Home Secretary Sajid Javid (Conservative) are accused by critics of all political persuasions of not coming to grips with the crisis. A British member of Parliament, Jo Cox, was murdered outside her office in 2016 by an alleged Brexit supporter, and member of Parliament Stephen Timms was stabbed in 2010 by a constituent angry about UK involvement in Iraq.

Since June 2016, the British government has been distracted by the complicated Brexit negotiations; it occurs to me that criminals feel they can engage in a free-for-all of homicide when those in authority are otherwise engaged. Can we blame rising poverty? Even Conservatives are beginning to acknowledge that their own party in power took fiscal austerity to unnecessary lengths, resulting in the highest-ever use of food banks. There is youth resentment of the proliferation of million-pound apartment blocks and soccer players being paid six figures a week. The film “I, Daniel Blake,” which won the British Academy Award and the Palme d’Or at Cannes, exposed the broken British welfare system.

Then we could ask: Why are Jewish kids not involved in crime? When I visited a high-security prison near Newcastle, England, that holds 1,000 violent men, my group was told there was no need for a rabbi as there were no Jewish inmates. Could other communities learn from the Jewish way of child-rearing an insight into keeping them off the streets? Decades ago, U.S. churches waged a massive campaign to attract urban youth to their activities and it worked—Britain is a seriously secular country and I do wonder if the absence of criminal behavior in Anglo-Jewish children is because of the intense involvement of synagogues in their weekly life cycle.

British MP Enoch Powell was ruined by one speech in 1968 when he warned of “rivers of blood” being the result of unchecked immigration. He was condemned as a racist. In my view, the violence in modern Britain is exacerbated by the fury generated by social media and lack of family life.

Most of all, Britain needs massively more cops on the beat. Can it solve gang warfare? That’s a tough question. But an unprotected citizenry is ridiculous and this must change.

Philadelphia-born Carol Gould is a UK-based political commentator and broadcaster; she is the author of “Spitfire Girls” and “Don’t Tread on Me: Anti-Americanism Abroad.”