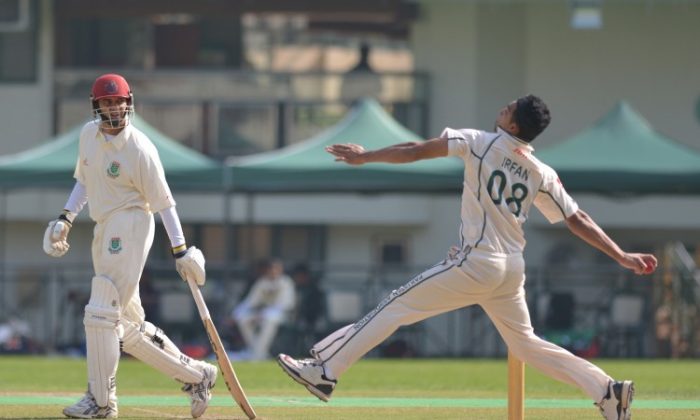 After being dropped at deep mid-on on the previous ball, Pakistan Association AMSUA batsman Najeer Amar made no mistake with this powerful drive for six on his way to 65 not out and to win the match for his team playing against KCC Infidels at the KCC ground on Dec 23. (Bill Cox/The Epoch Times)
News

Infidels won the toss and decided to bat, but most of the batsmen struggled against the top level bowling of the Pakistan Association team. Their three medium-fast Hong Kong squad attack of T. Afzal, A. Khan and I. Ahmed broke the back of the Infidels batting, taking five of the top six wickets.

However, R. Sujanani was in good form playing some stylish shots in his innings of 55, which almost lasted right through the innings. He was finally out LBW to the bowling of another Hong Kong team member, leg spinner M. Hussain when the score was 95. The lower order batsmen were no match for the Pakistan Association bowling and the innings ended at 98.

Pakistan Association started their innings with the clear intention of not only winning the match, but picking up a batting point by scoring more than 1.25 runs per ball. Master batsman K.H. Butt hit 16 off the first over before being bowled on the last ball of the over by E. Nawaz.

Left-hand batsman N. Amar then continued the run-scoring taking an unbeaten 65 off the next 10.5 overs to win the match and claim the extra point. He was well supported by M. Hussain who finished with 16 not out. Pakistan Association AMSUA won the match with the loss of only one wicket in 11.5 overs.

Speaking with The Epoch Times after the match, Pakistan Association captain Tanwir Afzal discussed his team.

“We have five or six current Hong Kong national players and two or three ex-Hong Kong players; we have a good strong team at both bowling and batting. We are quite well at the moment. We have a strong fast bowling attack, one leg spinner and one left arm spinner, so we have a good bowling package,” he said.

In Tanwir, the Pakistan Association has a well-credentialled captain—coming from Islamabad where he played for Pakistan juniors; during the summer Tanwir plays for Cambridgeshire in the East Anglia Premier League in the UK

D.B. Dearing scored 75 and K. Shah scored 60, with both falling to catches off the bowing of H. Amjad.

In reply, USRC/Millennium number two batsman, J.F. Khan, scored an enterprising 26 in an opening stand of 43 runs with N. Aktar (15). H. Amjad was the only other batsman to show promise against the Templar attack finishing with an unbeaten 33.

But the USRC/Millennium team as a whole could only reach 95 off 26.4 overs, leaving Templars the winners by 140 runs. As well as batting well, H. Amjad also took five wickets for 47 off his 10 overs.

I. Arifi took five of the USRC/Millennium wickets for 39 and W. Dawood took four wickets for 12 runs.

In an unfortunate incident towards the end of the match, Templars captain J.P. Lampsam went to hospital with a suspected broken finger after attempting to take a sharp catch at second slip off the fast bowling of A. Kanthan.

HKCC won the toss and batted first scoring 143 all out off 45 overs. The Vagabonds in reply could only reach 76 runs off 29 overs and lost the match by 98 runs.

V.C. Creagh picked up four wickets for eight runs, while the other wickets were shared equally by R. Raja, G.B Lamplough and G.L. Lamplough.