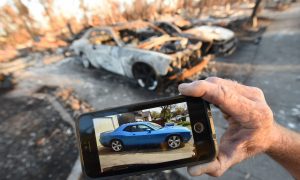 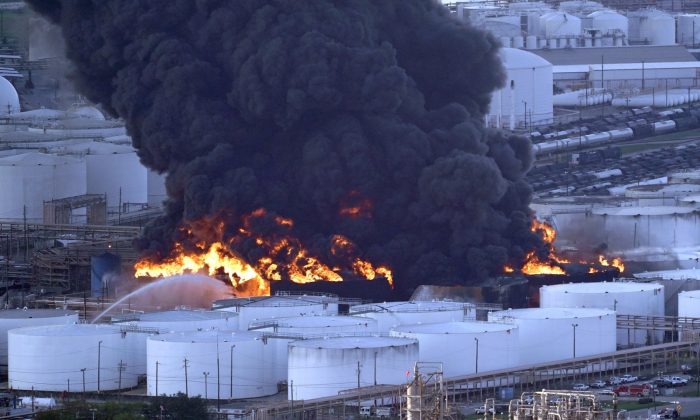 HOUSTON—A large fire at a Houston-area petrochemicals terminal will likely burn for another two days, authorities said on March 18, noting that air quality around the facility was testing within normal guidelines.

The fire erupted Sunday at Intercontinental Terminals Company in Deer Park, about 15 miles southeast of Houston. Firefighters were working to control the blaze, and the company said the risk of explosion remained “minimal.”

ITC has said all employees have been accounted for and no injuries have been reported. A huge plume of smoke could be seen for miles, including from the Galveston Ferry, about 35 miles southeast of the blaze. Officials estimated the plume rose 3,000 feet to 4,000 feet into the air.

The company said the fire spread to seven storage tanks holding components of gasoline and also used in nail polish remover, glues and paint thinner. ITC initially said the fire had spread to eight tanks, but company official David Wascome scaled back the number Monday, saying one of the tanks was empty.

Monday afternoon, ITC spokeswoman Alice Richardson said fire crews had made progress battling the blaze as three of the tanks were now only intermittently on fire.

A report done by the Center for Toxicology and Environmental Health, a local environmental consultant hired by ITC, shows the air quality around the facility was below levels that would represent a health concern, Richardson said. Data for the company’s report was collected from multiple locations in Deer Park and in surrounding communities from Sunday through Monday morning.

Harris County Judge Lina Hidalgo said Monday the county is performing its own monitoring of air quality and reviewing data from the state.

“The latest information available doesn’t show levels beyond a threshold that would make this dangerous,” she said.

Hidalgo, the highest elected official in the county, said if conditions change, residents would be alerted about any potential health hazards.

A shelter-in-place order was issued Sunday for Deer Park, which has about 34,000 residents.

The order was lifted early Monday after air-quality tests showed no unsafe levels of chemicals, according to the city.

But city and county officials warned that smoke from the fire could cause skin and eye irritation, and respiratory issues. Schools in the area were closed Monday as a precaution. Deer Park and the school district in neighboring La Porte planned to resume classes on Tuesday.

Isaias Lopez’s grandson stayed home after classes in La Porte were canceled. The two walked his dog at a park on Monday and looked at the dark plume of smoke coming from the fire.

Update from the City of Deer Park: The fire at the International Terminals Company (ITC) Deer Park facility continues…

“I’ve seen the smoke since yesterday,” Lopez said. “It’s been blowing like that. Today it’s been making more wind than yesterday. So it’s not so bad as long as the smoke don’t come around this area. I guess we’ll be OK.”

Fire crews used foam to protect storage tanks that have not caught on fire.

“We are controlling the fire and keeping it off the rest of the tanks,” said Ray Russell with Channel Industries Mutual Aid, an organization that coordinates rescue and emergency capabilities of the local petrochemical industry.

Russell estimated the fire would burn for another two days. He said firefighters were now in a defensive mode.

Harris County Fire Marshal Laurie Christensen said investigators from her office are on the scene of the fire and are still determining a cause of the blaze.

The fire was the second in as many days at a Houston-area petrochemical facility. A fire at an ExxonMobil plant in nearby Baytown that broke out Saturday has been contained.