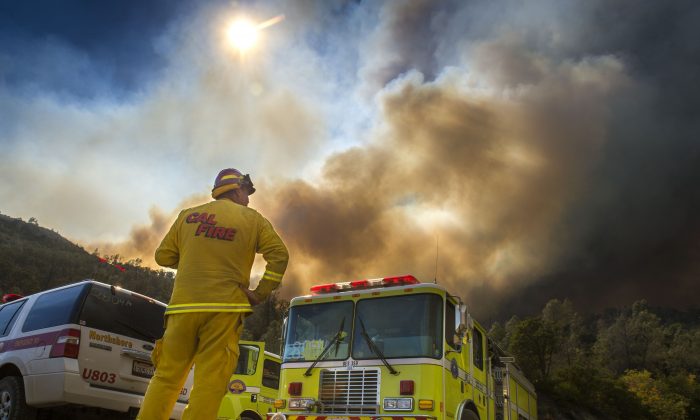 MIDDLETOWN, Calif.—Firefighters are reporting some progress against a Northern California wildfire that has charred more than 100 square miles of terrain, destroying buildings, threatening many others and sending thousands of residents fleeing.

As firefighters and equipment from outside the state poured in to battle the blaze burning about 100 miles north of San Francisco, more than 13,000 people were required or urged to leave their homes, vacation cabins and campsites.

Firefighting officials said crews made some progress Tuesday with some help from light rain. The blaze was 20 percent contained, but it was not expected to be corralled until at least Monday.

Teams were able to build a buffer between the flames and some of the estimated 6,900 homes it threatens. Despite the fire’s growth, no additional homes were consumed outside the two dozen already destroyed.

The fire, by far the largest of 11 burning in Northern California, started on July 29 in drought-withered brush that has not burned in years in the Lower Lake area. A cause has not been determined.

The National Interagency Fire Center in Boise, Idaho, has the wildfire listed as the nation’s highest priority for crews and equipment even as potentially destructive blazes burned in Oregon and Washington, spokesman Mike Ferris said.

He called the fire that has burned 101 square miles “one big monster.”

“In Northern California alone, all their resources are committed, and they are having to go outside the geographic area to get resources, whether it’s aircraft or firefighters,” Ferris said.

With more than 3,000 firefighters battling the smoky blaze and evacuees seeking shelter, motels were booked up for days within miles.

Margot Simpson, a manager at the Red Cross evacuation center set up at Middletown High School, said she hadn’t had any luck finding a room for a person in a wheelchair after searching four of the bigger nearby communities.

“I started in the phone book at the top of the list, and I started going down and I got nothing,” she said.

Many people not affected by the fires stepped up to help. Tabetha Atwood, the owner of Our Happy Tails Etc., a local doggy bakery, was helping to match frightened dogs with their owners at a command center at the Moose Lodge in Clearlake Oaks that was serving as a community assistance center.

Atwood also had dog treats on hand for people who came by with their pets while other volunteers gave out pillows, apples and piles of French toast to people displaced by the fire.

“These are our friends, our family and our neighbors,” she said.

By Tuesday afternoon, with 15- to 20-mph winds coming from the northwest, the Moose Lodge itself was being threatened and the people there asked to leave.

Layna Rivas of Clearlake Oaks tried to remain calm after checking the latest map showing the wildfire’s overnight progress. It showed the artists’ haven she has spent the last five years building directly in the flames’ path.

Rivas was thinking of her baby grand piano in a studio made out of straw bales.

“Worst part is I can’t get in to see what’s been damaged or no,” she said. “My heart is heavy at the thought of my once epic view of the valley that had an array of life and colors now grey and lifeless.”

Crews have conducted controlled burns, setting fire to shrubs to rob the blaze of fuel and protect homes in a rural area of grasslands and steep hills. Nearly a week into the fight, fatigue has set in.

“There were too many (spot fires) for us to pick up,” Battalion Chief Carl Schwettmann of the California Department of Forestry and Fire Protection told the San Francisco Chronicle. “With these drought-stricken fuels, it’s just moving at an extremely high rate of speed.”

Clear Lake, which at 70 square miles is the largest natural lake entirely within California, is a popular spot for boaters and campers. Despite the proximity of the fire, no homes around the lake were considered at risk on Tuesday, fire officials said.

President Barack Obama was briefed on the fire and has asked his aides to stay in close touch with California Gov. Jerry Brown and other local officials, the White House said.